Our data scrum half, Braden Maccke, has been churning out good analysis of the weed space over the last few weeks, based on months of digging through filings, calling IR guys, harassing Health Canada, and occasionally being sneaky in order that we can actually put together a site that compares apples to apples in the weed space.

That’s not easy. Every company has their own ‘efficiency metrics’, and some aren’t so efficient with them. CEOs don’t like revealing company intelligence, the licensing rules keep changing, and even those licensed are often at different stages of licensing, growing, harvesting… recalling.

So how does one compare one company, that may have three licenses to grow and sell, and plans to expand by four times their current grow capacity with greenhouses that aren’t built yet, to another company with one license to grow (but not sell).

There are ways. Cost per gram grown will be important as the government distributors insert themselves into the conversation and beat prices down from the present $7 per gram average to something closer to $4 per gram.

Also important: Yield per square foot. It costs a lot to heat and water one foot of weed greenhouse, so maxing out the number of grams that emerge from those costs will be uber-important. Hell, if you can double the yield from 500k sq. ft of canopy space so that your competitor needs 1m sq ft to hit the same mark, that’s important stuff.

Also important: Who is actually growing. That is, whose production numbers are moving up, and who is increasing their sales quotas.

NOTE: There are other LPs selling what they grow than what we’ve listed below – Supreme Cannabis (FIRE.V) which doesn’t release that info, Cronos (CRON.V) ditto, Abcann Global (ABCN.V) which has only a few quarters released, HIKU Brands (HIKU.C) which just got its sales license, Emblem Cannabis (EMC.V) which doesn’t have a lot of numbers out yet, and Emerald Health (EMH.V) which has been playing hidey games with their grow numbers, to the point where we’ve wondered if they’re growing anything or simply reselling as needed. Others who have released info might not be so reliable – Hydropothecary’s sales numbers are a little too rounded, as an example, to be considered accurate. But I digress.

These numbers, from the top tier producers (that is, those that have more than 12 months of sales data), show us trends borne out over time.

As an example, Hydropothecary (THCX.V) was a coiled spring in early 2016, blasting out a big increase in product as it jumped in facility size, which was matched by Aurora (ACB.T). But those spikes aren’t what we want to dig into because they started from a small place and a big percentage increase from a low number is still a low number.

Note the downward spikes for THCX and Organigram in early 2017?

Product recalls. Those events also contributed a big increase in cost per gram and decrease in facility efficiency (we’ll get to those numbers later).

We could talk Cannimed (CMED.T) but they don’t really show up here because their increases are steadily in the 15% – 20% range. This chart is better at showing outliers and spikes.

If we’re interested in more recent trends, which may be indicative of value in the market today, Aphria’s grams sold numbers are up significantly in the most recent published data, and have been growing steadily through 2017. Added to the significance, their numbers were already decent.

But data can be a terrible tease. What looks great on one chart is obliterated by the next.

We don’t see Canopy Growth Corp (WEED.T) doing anything drastic in terms of percentage growth in grams sold on the chart up top, but they’ve sold a literal shit-ton more than anyone else because they started heavier. A small percentage growth per quarter for them is a big jump in real terms, comparable to the others.

Medreleaf (LEAF.T), ditto, sells a lot of weed, and is largely unheralded for doing so. Their percentage increases up top are sustained and manageable, so much so that you wouldn’t notice them compared to the craziness that tumbles around them.

Aurora receives a lot of market cred for their acquisitions and grand growth plans, but they really don’t grow that much weed, nor sell so much that they put the fear into Canopy.

Hydropothecary? Not a player at this level. And Organigram’s sales numbers (factoring in the massive buyback they had to deal with) are what the Germans would call scheiße.

Cannimed? Again, they don’t really show up on these numbers in a big way, despite Aurora’s interest in them.

But, again, each metric only tells part of the story. Medreleaf may look world beating over 12 months, but…

With the help of these numbers, we can now see that LEAF’s sales numbers were actually leveling off over the last several quarters, which we see a evidence they’d maxed out their facility’s potential. With new produciton space having recently opened up, we should see movement from them now.

Aphria is making a solid move, and Canopy is still growing at the top side, which is harder to do when you’re already fat.

THCX is, again, a marginal player and showing few signs of changing that, and Organigram just seems to be keeping the lights on.

And Cannimed? Once more, they’re just not that big a deal. By these numbers, Aurora really did pay above the odds to get them.

Let’s go into some detail on that. 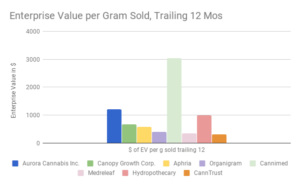 If pricing an LP on how much they produce and sell, Cannimed’s sale price to Aurora was insane. Sure, Aurora needed some active grow space under its umbrella (the company currently only grows 95k sq ft of canopy, despite its value on the market), and the M&A activity did spur a sector spike, but for what they’re getting, Aurora has overpaid by a factor of around 3x, going by this chart.

This chart also sells the tale that Cannimed was overpriced, with Aurora also tipping the scale on that end, while CannTrust (TRST.T), Medreleaf, and Canopy actually present a compelling case as value plays, despite their market caps.

Admittedly, recreational use may skew things a lot going forward, and even today, as some producers are banking a lot of what they grow rather than selling it now, figuring there’s going to be a supply problem when the gates open.

On the flipside of that, if you want to sell to Ontario, you’re going to be paid what Ontario’s Liquor Board says it will pay, and that may be far less than you could get today from Johnny Lunchpail.

Data Editor’s Note: Not all reporting is created equally, and that makes it very difficult to line these companies up usefully in terms of cost per gram. Our preferred costing metric includes shipping and oil conversion costs. They’ve been added in to this metric for companies that break them out, but in most cases we’re dealing with a dearth of reporting. Chris put this in before I had a chance to properly sanitize it, so it’s staying, but please stay tuned for a proper detangling of cost per gram in the cultivating pubcos.

These numbers are very telling. While most LPs were getting their prices to grow low though 2017, some were late to the party. Cannimed’s numbers REALLY dropped as govt liquor board became to the go-to buyer going forward, and Aurora got its costs under control too – presumably as it relied less on outside product.

But Organigram – Jesus. Even taking out the costs of their product recall, which accounts for the big spike above, they’ve flattened out at a cost price that is WAY too big to be workable under a liquor board-dominated future. If it’s costing you $7 per gram to grow the stuff, and you’re selling it for an average of $8 per gram currently, you have nowhere to go when the squeeze is applied.

Here’s another interesting story. While growth facilities are on the rise, the amount of grams being actually sold is rising harder. This tells us that LPs are buying from other growers, those without sales licenses yet, to keep the product moving. That hurts the bottom line, unless those growers are doing a hell of a good job on cost (Supreme maybe?), but it will be this way for a while as those mega-grows we keep hearing are being built actually turn the lights on, then spend 3-6 months growing before their first harvest.

So what does all this tell us?

Part of a story. Future facility growth isn’t unimportant, and what happens to weed once it is grown (turned into oil, sold at a premium, sold to other companies at wholesale, etc) can make a difference on the bottom line.

Canopy’s big numbers are great, but their cost to grow will be all important going forward and, on that, they may struggle with the scale of their operation. In addition, they’ve raised a ton of money (read: diluted the sharebase) to get there.

Aurora, for its massive market cap, is not the major player here, and may have some downward pressure if it can’t get the million square feet (that have driven its share price) to monetize soon – and at a low cost. It too has raised a lot of money, including through debt, and has seen its share price sliced up recently.

Medreleaf seems to be a solid ‘security pick’, but unlikely to show massive upside without something crazy happening. And Aphria just keeps on plugging away, growing in a manageable way without getting nutty. It’s recent divestment of US assets keeps its game cleaner.

Hydropothecary wants to be one of the big guys, and that’s admirable, but also risky without evidence that they’re capable of increasing sales, or growing efficiently. Market cap currently appears to be based on future potential, not current achievements.

Cannimed? I think I’d have looked at other targets if I was Aurora, but then, that whole acquisition drove the prices of all weed companies up for three months, so even if ACB ends up headed off a cliff at some point, we can all say thanks as it sails.

And Organigram (still) needs to work right now to show it’s not a dumpster fire. Or announce what everyone suspects – that they’re seeking buyers.

FULL DISCLOSURE: None of these companies have a commercial connection to Equity.Guru, and we hold no stake in any of them.

Previously in this series: