Belmont Resources (BEA.V): Cheapest US lithium play may just be what others promised

You use lithium ion batteries all day long. Cellphones, laptops, solar panels, wind turbines, electric vehicles – all the things that make our lives livable and the earth sustainable need them. You love them. They keep you from reverting to a caveman lifestyle. They are life.

So, of course, you invest in lithium… right? 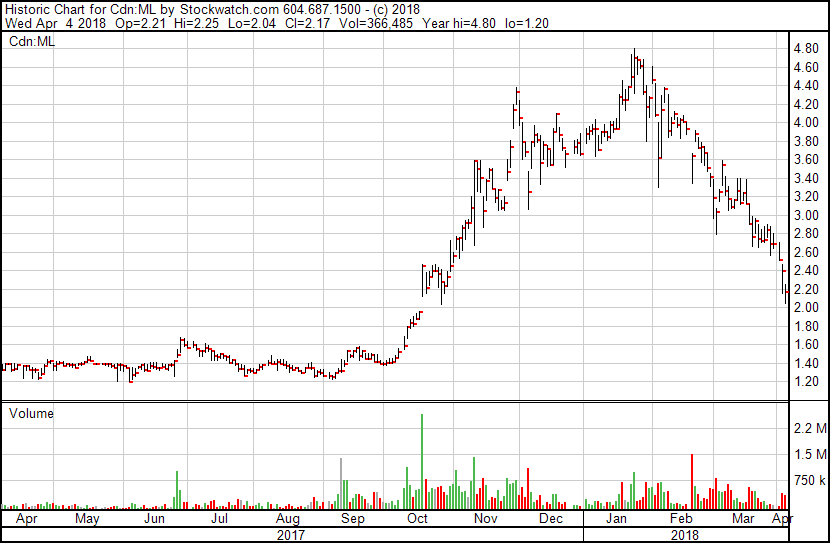 Hell, why not? That’s Millennial Lithium’s (ML.V) chart above, and it’s a damned horror show. Millennial has taken on a swathe of Chinese money from the somewhat ominously named company Million Surge, and put a rep from its parent company on its board. With an influx of foreign investment with the potential to get bigger, one would expect the chart to reflect the possibility of a take out, but the sell off in the lithium sector has been ongoing and filthy thi syear.

Just a few months back, Lithium-X (LIX.V), one of North America’s first movers in the lithium exploration space, was grabbed by Chinese buyers for low nine figures.

In Canada, lithium players speak in hushed tones of the meetings they’ve had with end user mega-companies, battery manufacturers, and heavy investors. Stuff is happening. But, much as with the cannabis industry earlier this year, a sense of overvalue has beset the sector and pack mentality has led to folks taking their profits (or even locking in losses) because that’s what everyone else is doing.

But lithium isn’t going away, and we’re a long way from having too much of it.

So where can one buy in and find value?

How about with the cheapest lithium explorer out there, with a market cap that your average downtown dentist could afford to buy outright?

And if that little battler had a patch of ground a stone’s throw from the Tesla Gigafactory, and was finding some nice results on its early exploration, and had no competitors around for miles, and possessed its own source of water, and had a stock price low enough that any upward move presented a large profit percentage… well, you’d want to put that on your watchlist, surely?

BELMONT RESOURCES (BEA.V) is exactly what you want, in my opinion, as a play money bet on a sector that’s hurting but shouldn’t be, and will at some stage take off.

It’s unknown: The CEO himself told me recently, “A little fish doesn’t become a big fish by sticking its head out of the water, he hides in the weeds until he’s big enough to fend for itself.”

It has an upward trajectory: While bigger players have been shredded, BEA’s valuation literally leaves it nowhere downward to go, short of a cataclysmic event.

It’s stacked with straight up mining guys: And mining guys who are giddy at the thought of what they’re into, at that. 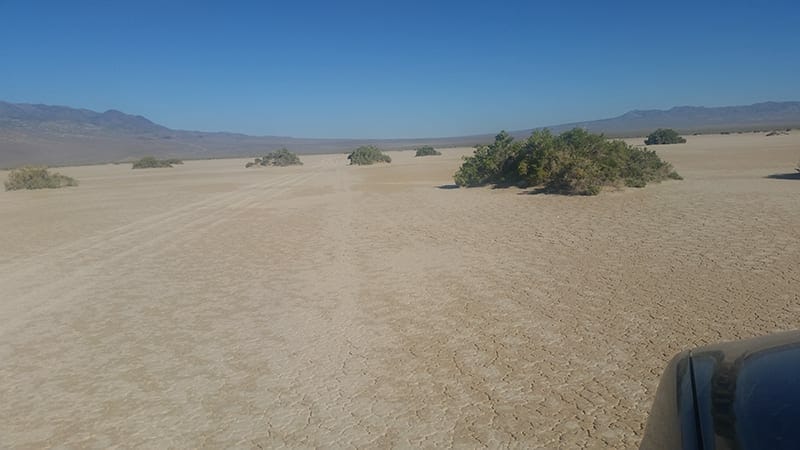 Not much on the surface, but what’s under there?

Well, at this point only magnetotelluric resistivity, gravity survey modeling, and satellite analysis work has been done.

But the resistivity data, recently announced, “clearly mapped a more conductive zone at many of the survey stations. This variation of the resistivity at depth is interpreted by Quantec as being a potential contact with sub-surface brine that may contain lithium.”

“This was exactly what we were hoping for,” says CEO Jim Place.

If you want to read the whole thing, you’re a better man than I am. All 145 pages are here.

So we can’t say there’s a whopping great amount of lithium down there (yet), but the drill holes that will help us get to that point are being plotted right now.

Belmont’s consulting geologist, Robert (“Bob”) Cuffney from Reno, Nevada will finalize and map drill-hole locations and process the application for permits with the authorities in Nevada in anticipation of drilling beginning in the second quarter of 2018.

The Company will also begin evaluating contractors to carry out drilling and sampling of soils and aquifer water from the Kibby Basin property.

But here’s the kicker for me:

Belmont’s property, out in the Kibby Basin in Nevada, has access to water.

Half the companies involved in the North American lithium exploration business are situated in the nearby Clayton Valley, home to the sole national producer in Albermarle (ALB.NYSE) and a Tesla-linked explorer in Pure Energy (PE.V), among a dozen or so others. While positioning in the Clayton was once a license to print stock certs, reality landed heavily on that patch when it became common knowledge that there’s not enough water to go around.

And lithium processing is water dependent.

Nevada Sunrise (NEV.V)/Advantage Lithium (AAL.V) have water rights in the Clayton, but nobody else outside of Albermarle does. Which means nobody else is moving forward.

In reality, the worst thing for a lithium patch is to have a lot of players elbowing for position, because when everyone needs access to the same source of H2O, someone’s going to be left out.

Or, as is happening in the Clayton Valley, everybody is going to be left out.

As Place told me last week on the Equity.Guru livestream, “Anywhere there is fresh water [in Nevada], somebody’s going to be feeding cattle or growing something with it.”

Belmont has access to its own water, and it won’t be needing to share it with anyone. For starters, they’re the only explorer around. And second, it’s not a source of water that anyone is going to be suggesting should be spraying almond trees or sustaining cows any time soon.

“You’ll find places in the area called Bad Water Valley and Poison Gulch,” he says, pointing out that early settlers were pretty literal in their naming processes. “You wouldn’t want to drink it, but we can make great use of it.”

This is a really big deal. Spodumene explorers up north require expensive and time consuming work to process the lithium out of their rocks. Belmont, should it pull lithium out of the brines in the ground… needs water.

And they have it.

SO WHY IS BELMONT SO CHEAP?

Because nobody knows about it yet.

Because the exploration is early stage.

Because the story doesn’t get sexy until the drills come out of the ground.

You may be wondering why the company hasn’t gone on a big promotional rampage yet, and the answer to that is simple: There hasn’t been enough news yet to warrant it. Belmont is at that stage where all the pieces are being put together for a bigger run later. They’ve raised only as much money as they’ve needed to, at this low price, to move the project forward. A larger raise would have diluted the shareholder base unnecessarily for minimal returns.

But now they’re doing the work. And while their larger competitors have been ravaged by the market, Belmont has been flat or even moving up. 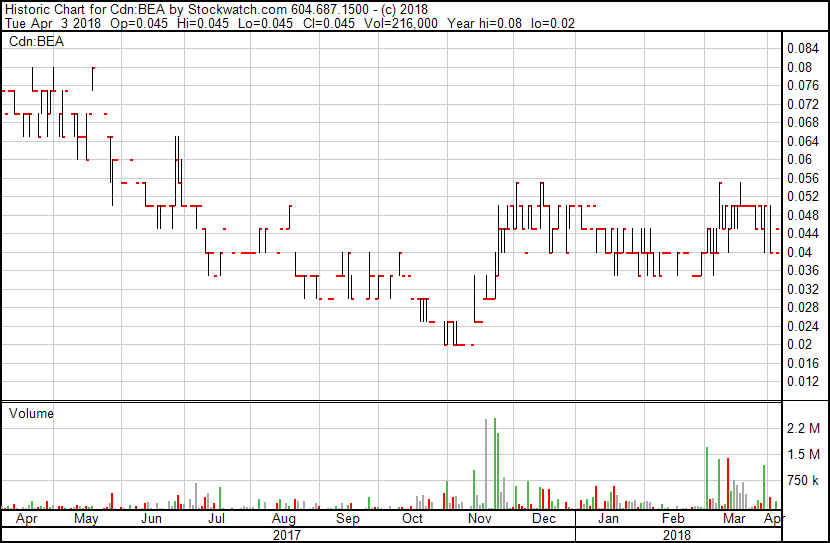 Belmont is accruing investors and trading volume and they’re doing the work. They’re not sitting back waiting for lithium stocks to jump again, they’re getting it done now so they’ll be revving their engines at exactly the time when lithium investors are looking to move their money out of freefalling mid-majors.

The company sees itself as being undervalued, but is in no rush to change that because the work to be done is in the ground, not in the boardroom. As news comes out, the share price will evolve, and financing opportunities will emerge at a better valuation.

That’s good, if a part of your portfolio is positioned for high risk/high reward investments. If you’re getting in early, at $0.04, you’re well placed for profits as news comes out, assuming any decent results are posted.

Lithium exploration isn’t hard work. There’s a lot of lithium all over the place.

If the company hadn’t approached me and told me about this story, I wouldn’t have stumbled over it until it was up 10x from where it is.. It’s literally a tiny company with a potentially large project in a massive sector that is ridiculously oversold.

These are the ingredients I look for. It’s on my watchlist. I suggest you take a long look.