Welcome back. We interrupt what was going to be our usual review of the early short activity in Canada with breaking insanity on the trade front. (Don’t worry, I’l still do a flyby at the end.) His Imperial Presidency signed new tariffs on steel and aluminum, with exceptions carved out for Canada and Mexico, The same day, House Speaker Paul Ryan had some strong criticism for the concept of tariffs and trade wars in general.

So – if you were a close friend of folks at 1600 Pennsylvania Ave. you made out great. Otherwise you got to enjoy the tremors worldwide as markets reacted to this lunacy.

Like a disappointed schoolteacher, the European President called this move ‘stupid’ in a recent speech. He also started listing all the stuff they would and could hit back on in retaliation, such as Harleys, and Jazz music (Ok the second one I made up).

Hey, do you own an Apple product? It’s gonna cost more. They *all* use a big ol’ hunk of aluminum which has a nasty new 15% tariff. Buy now before the rush.

All this to say the ripples of this shot heard ‘round the world is going to likely distort the hell out of the short market. Hell, I’d even look at shorting Apple (AAPL) – it’s so overvalued, even a minor depresssion could mean a big payday.

Trade wars are messy, and although we’ll look quickly at the market for the early part of the month – I fully expect the update next week to look like a completely new landscape. I’m looking forward to it. (I have a morbid sense of humour).

Now, let’s go back to a time when all we wanted was to short weed and crypto.

March of the Living

As promised here’s the state of Europe before WWI.

Looking at the largest short positions, the real story here is the TSX main board. 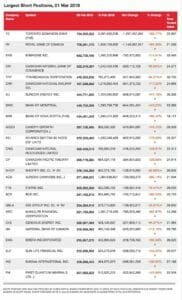 Apart from the big boys like Canopy (WEED.T), and Aurora (ACB.T) weed is gone. Banks are hot, and I am shocked/not shocked to see shopify (SHOP.T) on here. There’s insurance, railroads. This really looks like a pre-trade war bet from the big money. Hold on to your hats, the Elder Gods have spoken, and the news will not be good.

If I were a betting man, I would be betting against the better angels of our natures – my gut tells me the angels are coming, with flaming swords.

Meanwhile in the small ponds, where the tadpoles swim, the TSXV and CSE both continue the story from last time. All the hits are here, small cap mining, weed, crypto, biotech. It’s a who’s that of public companies. 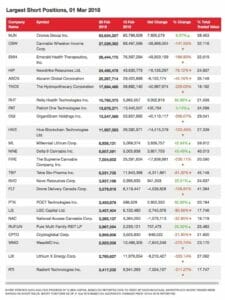 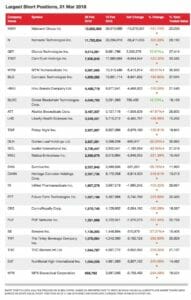 Any analysis I give you here is whistling in the face of the tornado. Let’s regroup in seven days and we’ll see who’s still standing.

Is that an Iceberg? Let’s rearrange these deckchairs.

In the covered shorts data, the story is an ongoing game being played before the music stops and the rules change.

The TSX shows normal short activity in that it looks like the market is holding it’s breath. A lot of profit taking in the mineral sector, and the folks beating up on Enbridge are having fun with the latest Alberta / B.C. trade war. 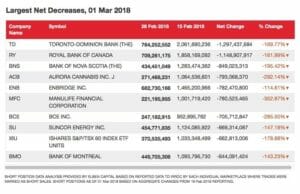 Below the TSXV and CSE shorts coverage show a continuing loss of faith in the cannabis sector, and a similar dip in the crypto sector. Good companies are getting beat up here and it’s a little unfair. HIVE (HIVE.V), Hydropothecary (THCX.V), HIKU (HIKU.C) are getting tossed by market forces, not because they aren’t performing solidly. 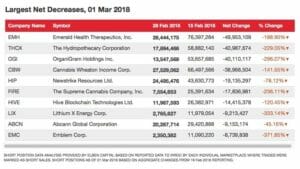 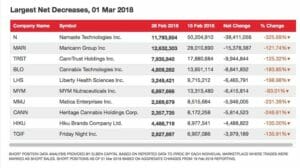 Begun, the Trade War Has.

So what’s next you ask? We’ll let the data tell us. If you’re liquid and have the stones, remember a crisis is always an opportunity. In this kind of cray cray, one good bet can pay for 10 bad ones.

Next week, we’ll look at the first set of data and see if we can’t chart a path through the darkness.

FULL DISCLOSURE: The team owns stock in or has HIKU, HIVE as a client. I personally don’t own stock in any company mentioned or listed above.