Sitting Pat (PAT.V) – as NRA lobbyists scurry down the stupid-hole

In the US, mass shootings occur nine out of 10 days.

National Rifle Association (NRA) leader, Wayne LaPierre blamed the massacre of 17 high-school students on, “the failure of family, the failure of America’s mental health system, and the unbelievable failure of the FBI.”

President Donald Trump agreed, suggesting that every school should have “a large number of very weapons-talented teachers.” 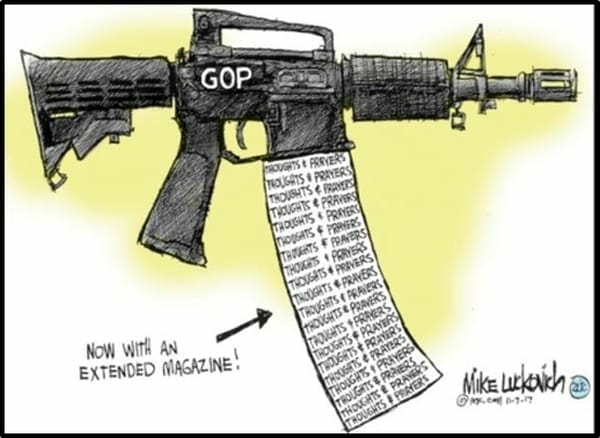 A country that responds to a school shooting with a call for “more guns” and “more weapons-talented teachers” – is not a country that is falling out of love with guns.

The segue from a human tragedy – to an investment opportunity – is never going to be elegant.

If you find the segue distasteful, we respect that – and invite you to stop reading.

The brain-dead response by the NRA and Trump to last week’s massacre confirms the on-going need for Patriot One’s (PAT.V) weapon’s detection technology “designed for cost-effective deployment in weapon-restricted buildings and facilities.”

Could Patriot One’s technology have deterred or prevented the latest school shooting?

But our gut sense is that 99 times out of 100, Patriot One’s Tech is going to be more effective than a “weapons-talented teacher”. 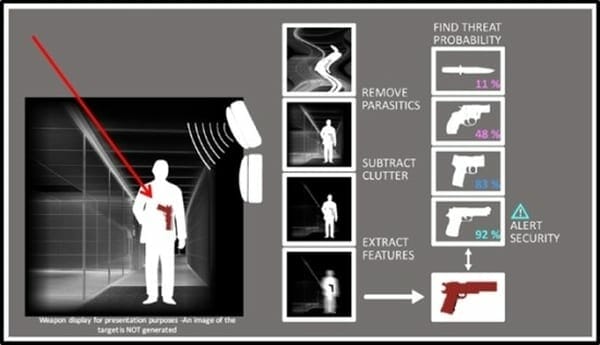 PAT’s hardware can be installed in hallways and doorways to covertly identify weapons and to alert security of an active threat entering the premises.

We first wrote about PAT on November 22, 2016.  It was in it infancy then but it was clear to us that it was a real company with a real product that can save lives.

Patriot One CEO Martin Cronin said, “Our motto is also our goal: We aim to deter, detect and defend against random acts of senseless violence in our schools, offices, shopping centres, transit stops, theatres, nightclubs and anywhere else innocent people work, live, and play.” 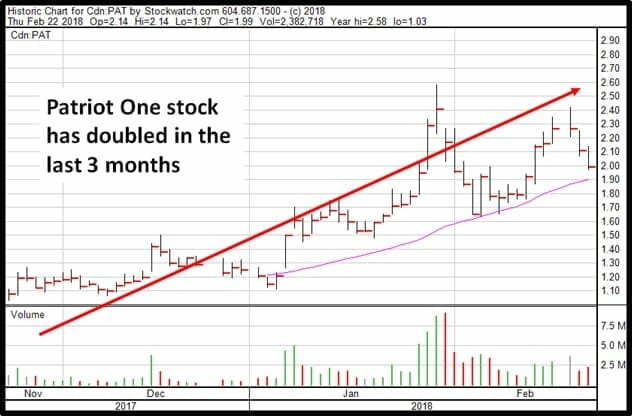 “It’s time to make soft targets hard without impacting citizens’ rights and freedoms,” stated Cronin, “We believe, as do many others, that NForce promises a practical solution to prevent many violent acts that can lead to loss of life, and we plan to deliver on that promise.”

We have been tracking the trajectory of the company closely:

Yes, we think Patriot One is delivering.

Each “unit” is attached to a half-warrant exercisable for a period of 36 months at $2.40.

If the stock is trading at $12 three years from now, those warrant-holders (PAT.WT.B) can dilute the stock with modest injections of cash into the till.

PAT also paid a cash commission equal to 7% of $25 million to the underwriters and issued them with warrants for 885,500 common shares at $2.00 for a period of 24 months.

Would it better for existing shareholders if PAT walked into a bank and borrowed 25 million at 3.5% annual interest?

Yes – but that’s not the way (this) world works.

If you want to know how funky and weird warrants can get – read all of this fascinating article by Braden Maccke.

There are many “end games” for Patriot One.

One is that they kick ass, sell a lot of units, and climb on quarterly revenue increases.

Or a weapons manufacturer like the $853 million  Sturm, Ruger & Co. (RGR.NYSE) could buy it as a PR stunt (we sell weapons but we like to know who’s packing.)

Another possibility is a buyout from the $3.7 billion CACI International (CACI.NYSE) that provides information solutions for Intelligence and Defense.

The net proceeds of the Offering will be used for funding the Company’s international expansion, accelerating the deployment of its technology and for working capital purposes.

The elevator pitch for Patriot One is that the hardware “can be installed in airports, subways, stadiums, and schools, on a street corner, or virtually anywhere crowds of people might need protecting, without giving itself away or inconveniencing people as happens at an airport security lineup.”

Patriot One recently solved the problem of fuzzy CCTV images, by integrating its technology with March Networks.

Deals have been signed in Canada, the US, the UK, and South Africa. Patriot One has a scalable manufacturing process.

“We must immediately harden our schools,” Trump announced this week. “Every day, young children are being dropped off at schools that are virtually wide open.”

According to the President, “schools are soft targets”.

Incentivizing the geography teacher to pack a Smith &Wesson is one solution.

Patriot One has another.

Full Disclosure:  Patriot One is an Equity Guru marketing client, we also own stock.