Here at Equity Guru, we’re proud of the fact we call ‘em as we see them. My colleague’s excellent piece on Aussie shenanigans this weekend is a great example. So on behalf of the team, I want to tip my hat to CNBC’s takedown of Barry Honig & friends and their exposé at Riot (RIOT.U). If what they allege is true, then good on them for exposing another shady operator in a very young and wild market. 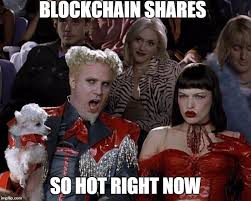 There are quite a few stories out there discussing the events around RIOT’s current meltdown. As a service to you and the other readers of this site, I have chosen to employ my many years as a professional PR flack on your behalf.

I am going to take you on a magical journey where we look at the RIOT response to this from the horse’s … mouth… and translate the PR speak for you. Of course, your mileage may vary, but this my best read of what they are really saying.

On with the show!

“Today, CNBC released a negative one-sided piece on companies that seek to jump on the blockchain bandwagon by changing their name and profiled our company.”

Translation: These sloppy guys shouldn’t even have included us in this piece, jerks.

“I wish to provide an update of where Riot Blockchain stands today and respond to some of their attacks. We have made significant inroads in building a diversified portfolio of investments and to begin securing digital assets.”

What follows is a list that boils down to: We bought some bitcoin (No word on if they held or sold), we have some computers, and we spread some dough around to other blockchain specula- investments.

“When I joined the board of Bioptix in January 2017 the Company had been reeling from a failed FDA approval and an acquisition of a new venture bleeding cash. I feel obligated to state unequivocally that pivoting away from these legacy ventures to Riot Blockchain was the right course.”

Translation: Oh, wait we are one of those companies – but I totally had a good reason, so it doesn’t matter that I am contradicting myself.

“It is worth noting that CNBC recently highlighted an infamous short seller complaining he could not borrow shares and adequately short Riot, which seems to be an impetus to distort the real facts about our company.”

Translation: Maybe its the Illuminati. Or the Chinese. They colluded with the media to get us. (Shit, this one might have a sliver of truth)

“We adjourned our shareholder’s meeting which is not uncommon when unable to garner a quorum. With the fast pace at which everything has been moving operationally, we did not have the requisite time to obtain this quorum and we have other corporate action items that may require shareholder approval as well.”

Translation: Shit, we got caught.

“At the end of 2017, I personally sold some stock that I held in our company. I sold less than 10% of my overall position and did so to cover tax obligations. I could have sold more stock in the same timeframe if I so desired. I truly believe in what we are building and the shareholder value it will create.”

Translation: I wanted to cover some bills, and besides, I can’t sell most of my stock yet, and until today, we thought the ol’ girl had some life left in her.

“Barry Honig has been a supportive shareholder of Riot Blockchain. Prior to my involvement with Bioptix, Mr. Honig filed a lawsuit against the company and its management as a shareholder because he believed the old management and board was not properly deploying shareholders’ cash. This led to the eventual re-examination by the board and management of the failing business, which ultimately led to the board’s decision that it was in shareholders’ best interest to evaluate other opportunities with its cash on hand. “

Translation (This one has a lot to unpack): This paragraph was written by counsel, and is to cover the really bald-faced craziness going on in my south Florida blockchain banana republic. Also, it was the board, ask them, ASK THEM!!!

Also Barry is a great guy who loves his shareholders. His mom will tell you so.

“We have assembled a management team, board, and advisors with exceptional industry credentials that have helped guide us and continue to create opportunities with meaningful technology and initiatives. Other companies may have tried to hop on the “cryptocurrency bandwagon”, perhaps partially as a result of our success.”

Translation: My milkshake brings all the investors to the yard. Haters gonna hate. 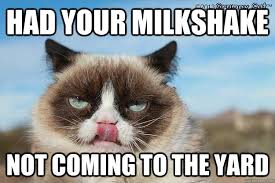 “After I was accosted without notice by certain reporters from CNBC, I had no interest in further dialogue with those reporters. We will continue to inform the markets of our activities through appropriate means such as press releases and our regulatory filings. The CNBC one-sided narrative has failed to tell the full story and latched on to innuendo and “empty chair” reporting.” 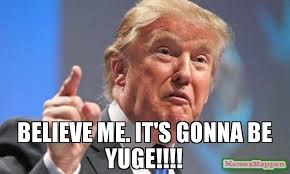 (OK for the record – first of all, your buddy Barry was supposed to speak to the reporter, and when they found you there possibly working out of that office, you jumped in front of the bus for good ol’ Barry. THEN you agreed to an interview, backed out, answered questions via e-mail, and complained when they quoted you. Can’t imagine why that all looked shady.)

“We are also focused on pursuing the launch of our own digital currency exchange. We have engaged a team of top legal counsel to assist us in this endeavor. We announced that we have entered a Letter of Intent to acquire a CFTC licensed registrant which would also allow us to launch a futures brokerage.”

Translation: If we survive this, we are gonna make so much money. You should invest, where can we send a prospectus?

“I believe there is a major market need for additional competitors for digital currency exchange offerings in the United States. We are embracing regulatory and compliance requirements in this regard with the hope of establishing a fully transparent and secure platform to help handle the growing demand of people wishing to transact in digital currencies.”

Translation: Pay no attention to the crypto stock index, look over here. It’s shiny. We will wave our magic wands and make money… good, good, now about that prospectus….

“We take our SEC reporting obligations seriously and diligently file all reports and filings. We have expended enormous effort to inform investors of the risks of our foray into uncharted territory. We have an open and expansive dialogue with the SEC Division of Corporation Finance about our registration statements and other filings with a goal to satisfy the collective sentiment of the staff of the various divisions of the SEC that are struggling to find common ground around how best to regulate our industry. “

Translation: Those fusty ol’ regulators don’t understand us hip kids doin’ the blockchains. In fact, we resent these guys so much, we’re totally finding ways we can avoid their “Rules” – but on advice of counsel, we affirm we are meeting all legal obligations. *wink* 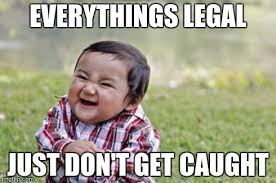 “We support full disclosure and will continue to work with the staff of the SEC whenever new regulations provide definition to this emerging sector. As has been noted by the Chairman in recent testimony, the regulators need to catch up with the business developments and we hope to remain at the forefront as a fully compliant reporting company.”

Translation: We want to pay our taxes, and follow investment rules, but you can’t like comprehend the awesome power of this fully armed and operational blockchain company. Your regulatory power is insignificant next to the power of Crypto. – but again, on advice of counsel, we affirm we are meeting all legal obligations. *wink*

And the final farewell….

“In closing, we are well capitalized with a strong team, strong assets, and growing operations. I originally came on as Chairman and CEO in November 2017 due to the tremendous opportunities that exist for blockchain technologies. I have never felt better about Riot Blockchain’s prospects of capitalizing on these opportunities.” 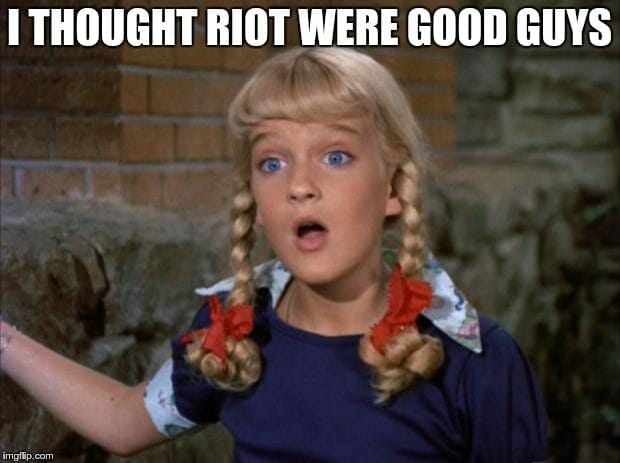 Beautiful semantic nonsense for the most part, and nothing that fundamentally contradicts in a meaningful way the facts as presented by CNBC. it all boils down to “We didn’t do it, and if we did it was an accident, you are mean. we are nice rich people, believe us. The other kids in the yard are out to get us.”

Here’s the irony. It’s not a crazy idea to say large hedge funds or big players might want to start picking off companies like RIOT. There’s money to be made in class-action fun. The problem for RIOT and its ilk, is they are vulnerable to this horses#!t in the first place because they are terrible companies.

I’m not the only one who thinks so. 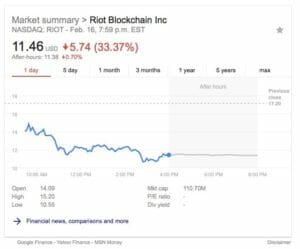 That’s a 33% drop in one day. more blood in the scuppers tomorrow.

And ICYMI – Chris pointed out these guys were bad news yonks ago. 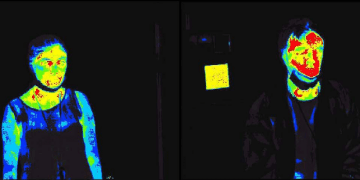 Internet of Things (ITT.V) proposed name change and rollback may be just in time