XIV, a NASDAQ traded inverse volatility ETN, cratered in after-hours trading Monday and now appears worthless. This has financial pundits pondering the contagion effects to Credit Suisse, the issuer, and the market in general.

It quickly became one of the big news stories following the Dow Jones record-breaking 1175 point plunge. 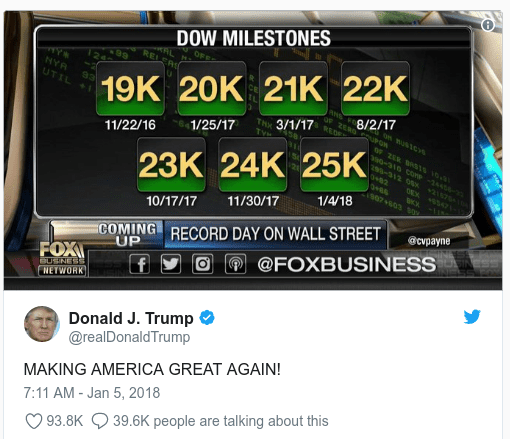 What a difference a month makes in the markets! Remember, remember the 5th of February!

Suddenly, shit just got real, and things are starting to look a little spookier.

RIP XIV – Looks to be worthless

While it emerged from the Dow’s 1000+ point annihilation at the end of regular trading hours (RTH) somewhat intact, it wasn’t so lucky in after-hours (AH) trading, getting smashed 84%. 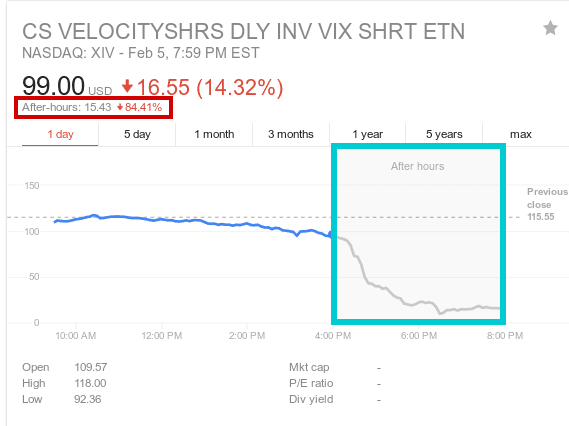 Chart breaking bad, right there! We’ve highlighted the AH action (boxed in blue) and the 84% drop, in red.

That number is important, as a decline in excess of 80% may constitute a Termination Event.

Whenever you decide to trade these beasts it’s a really good idea to read the prospectus.

So what was all the brouhaha which caused XIV to come crashing down? Seems someone spotted the fact it was only worth $4.22. Then everyone saw it, causing them to collectively hit the sell button.

Here’s a screen grab from the VelocityShares website with the XIV product data for February 5th, 2018. 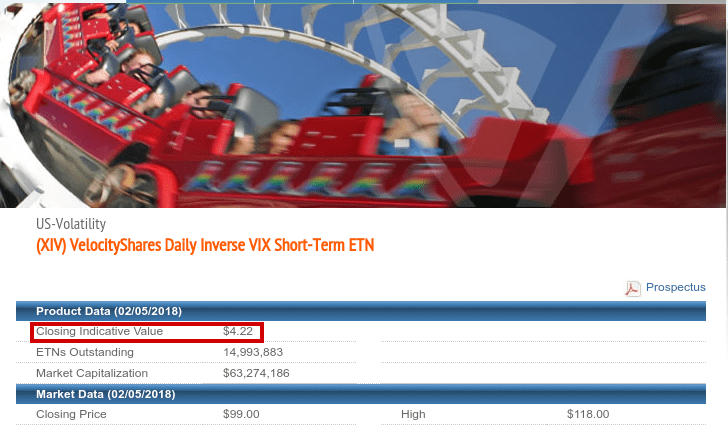 Doesn’t take a genius to know what happens if you tell people something which last traded for 99 bucks is only worth 4 and change.

It’s trading at around $15 after hours and a notice on the EFTs website said the net-asset value is just $4.22. If that’s all correct, it’s basically worthless. It’s a similar story in SVXY, which is a similar ETF from ProShares. – Source: ForexLive

[Editors Note: Many articles are incorrectly referring to XIV as an ETF. Wrong! – It’s an ETN. See below]

So is it worthless?

Pretty much, based on our deciphering of the overnight information. We defer to Vance Harwood of Six Figure Investing for more. 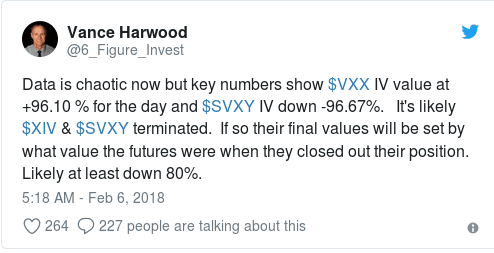 Six Figure Investing have an excellent in-depth article on how XIV works, not that anyone will need this going forward.

Understanding Volatility and the VIX

Volatility in finance is not that different to volatility in chemistry – a way to determine the chance of something exploding in your face or vaporizing your portfolio.

Low volatility = boring and unlikely to make you much cash. High volatility = monster moves every other day, direction unknown.

Short for Volatility Index, the VIX takes its cue from the Implied Volatility (IV) of 30-day S&P 500 options and gives traders a gauge for how fearful market participants are of the current conditions. This is why it’s known as the fear gauge and since its introduction by the CBOE in 1993 its been a widely accepted barometer of market sentiment.

When complacency is commonplace the VIX is low, usually below 12. When panic spreads the VIX rises. Anything above 15 is considered ‘high’. The market spends its time either climbing the wall of worry or sliding down the slope of hope.

VIX futures were introduced in 2004 to allow participants more of a pure play on future volatility. Think volatility is too high? Sell VIX futures. Too low? Buy ’em.

These, in turn, spawned a series of other derivatives – VIX options, VIX ETFs VIX ETNs and the like.

Plenty of ways to take a punt of volatility if that’s your thing. Caveat Emptor my friend. 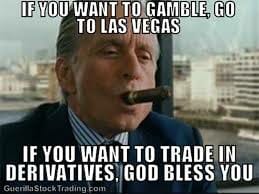 How does an ETN differ from an ETF?

In two words – credit risk. More from Wikipeda, as per usual:

ETNs are designed to provide investors access to the returns of various market benchmarks. The returns of ETNs are usually linked to the performance of a market benchmark or strategy, less investor fees. When an investor buys an ETN, the underwriting bank promises to pay the amount reflected in the index, minus fees upon maturity. Thus ETN has an additional risk compared to an ETF; if the credit of the underwriting bank becomes suspect, the investment might lose value, the same way a senior debt would. (Emphasis ours)

That’s why we’ve seen the fireworks in AH action on XIV. There’s now some doubt as to Credit Suisse’s ability to pay up and questions about the accuracy of the Closing Indicative Value. (as mentioned above)

Back to the prospectus.

Meaning they can wind the notes up and pay you out. Forget about holding the position for sunnier days, amigo. It’s highly likely this Acceleration Event will occur but as yet CS are holding their cards close to their chest.

The good news for anyone unlucky enough to still be holding these is they can’t go below zero. But still, the thing was worth 100 bucks yesterday and today? Likely nothing.

Is Credit Suisse in the firing line?

In the case of XIV, who has the losses? Here is a clue. Numbers published Sept 30 showed Credit Suisse holding nearly 5 million of the shares itself. Those would have been worth $550 million at the open and about $20 million now — a net loss of $530 million for the Swiss bank.

.. because if Credit Suisse is on the hook, it would mean two quarters of profits have just been wiped out: recall that CS reported roughly $250MM and $300 million in profits in the last two quarters, which would mean that the XIV loss was roughly equivalent to half a year’s worth of profits

Nicole Sharp, a spokeswoman for the note’s sponsor, Credit Suisse AG’s VelocityShares, said in an emailed statement that “The XIV ETN activity is reflective of today’s market volatility. There is no material impact to Credit Suisse.” She didn’t elaborate on the fate of the product. 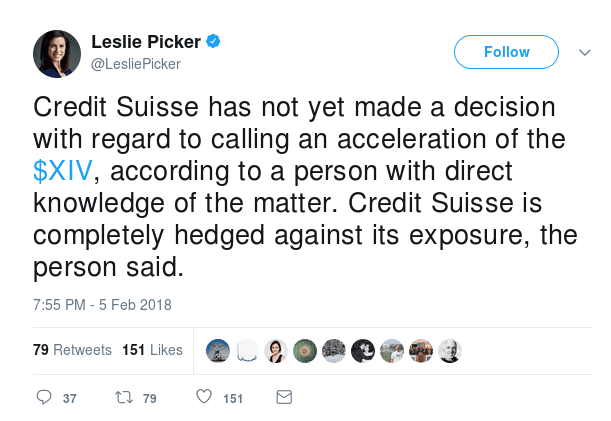 Additionally, talk has already begun suggesting the CS bonus pool will take a direct hit because of the blow-up.

Guess we won’t know until the dust settles on this one.

As shown above, FT is reporting US ‘inverse volatility’ funds halted; exchanges cite pending news. As they’re hiding behind a paywall we can’t tell you any more at this stage.

S&P futures were down 70+ points in overnight trade but have staged a remarkable comeback. Maybe the Commander In Chief has had to activate the Plunge Protection Team (PPT).

These market moves are a little reminiscent of 2008 – Whatever you do, be careful out there folks. When the swords are slashing it’s not the time to stick your neck out.

FULL DISCLOSURE: The author does not hold any VIX-related securities at this time.