Adventures In Data Visualization – What Not To Do

There are stories to be written about the retail side of Cannabis, and Equity Guru is looking forward to bringing them to you. This story concerns one of the dispensary companies that hopes to become part of a larger consumer-facing side of the marijuana industry, but it isn’t about that company. It’s about their pitch deck.

Statistics Are Not Toys, Kids.

Last Week Chris wrote a victory lap about our marijuana stock calls, and linked at the end of it to a pitch deck for private retail cannabis company The Village Dispensary. The Village is doing what small private companies their size almost never do, but almost always should. They’re illustrating their business proposition in a digestible format.

I’m often approached by small private ventures looking for help raising money from investors and some of those companies balk at even making a deck. Then they get indignant when I explain that they’re going to need investor-focused content now and forever. By the time they get around to asking me for help, a long-winded, un-illustrated shaggy dog story of a pitch with no data backing it up has been told to anyone who would listen, but nobody has bitten. They’re hoping I know someone, but they don’t need a new deck that explains what their company does and how it’s going to grow to anyone who reads it. No. They just need an introduction to an investor who can understand this enormous opportunity!

In principle, The Village is doing the right thing here by circulating an investor-focused, data-heavy deck. I expect that being a consumer-facing business gives the founders the ability to make things appealing and friendly on pure instinct. I’d like to repeat, here, that I’ve got nothing against the company or the people who run it. I’m sure they’re good people, strong members of their community who love their mothers and let people merge in traffic. Furthermore, unlike most venture stage companies running around Vancouver looking for dough, The Village has revenue. I should love what they’re doing here, but I just can’t.

UPDATE: Since this was written, The Village, who is now a “bloomery”, sent me a new pitch deck with updated art and some better labelling. Some of the more vague slides have been phased out. It scans a lot better. We’re going to run this analysis anyway, because it’s still a good look at what not to do, and the quantitative objections still apply.

The Tale of The Tape

By page three of this Village deck, I was already twitching.

Ostensibly, this is a graph of an opportunity. Without axis labels to tell me, I’m going to guess that the X axis are age groups in 5 year brackets. The Y axis labels the bars as percentages, but it is unclear what they are percentages of. Since they appear to add up to 100%, we can work out that this is most likely a breakdown of the demographics of a single population. Are these the percentage of Canadians in these demographics who use Canadian cannabis retail establishments? They could also just be cannabis users of any kind. In Canada? BC? Worldwide? It’s anyone’s guess. Nothing on this page or any of the other un-numbered pages tells us what this graph represents. “The Opportunity” being illustrated here doesn’t even have a title. Moving along… 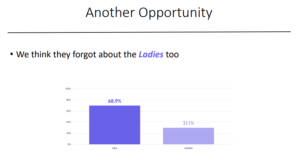 While it’s still unclear what is being graphed, we’re being shown a 70-30 demographic split between genders. It is unclear how this is an opportunity. If this were a population of storefront cannabis clients plotted next to all cannabis users, and the split in the baseline pot consumer population were (say) 50-50, they’d be showing what I think they’re trying to show: an under-served market. This doesn’t show that. It doesn’t show anything!

They try paying these off a few slides later with a 2 column chart that doesn’t get us very far. 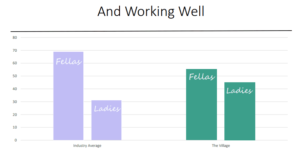 The concept appears to be that Village clients are in under-served demographics. They do better than average in the 50+ market, though it’s unclear exactly how much better, because of poor labelling. People over 50 are shown to represent just under 20% of this still unnamed population. The graph also shows them lagging in the two largest market demographics by age.

Crucially: they’ve yet to put a number on the total! How many people are we talking about? What’s the full size of the opportunity? I can appreciate that it’s a difficult thing to get a handle on, but if they got the demographic breakdown, there must be a total population or an estimate of it.

Their slide on the woman’s market shows a more even gender split at their shop, but the perpetual absence of labels makes it’s unclear why that matters. The very same slide shows an “industry average” that breaks down 70-30. Are they intentionally going after a smaller market? A sense of scale may show a reason to, but we haven’t been given one.

In the disclaimers, The Village tells us that they used a report from cannabis industry statisticians and peddlers of trade reports Headset, who provide a data-based cannabis consumers report to those who want to pay for it. The dataset referenced appears to be made for consumers like The Village; dispensary owners who want to understand their clientele. Most of the set lives behind a paywall, and the teaser doesn’t give us any clues as to what population is being sampled here, or what jurisdiction they’re in. The demographics brackets are neat, but they don’t mean anything to investors without the context of the related totals.

Now we’re cooking! Page 7 is a nice graph of new Village memberships by month. There’s a title up there… a label on the X axis… I’d like to see some units on that Y axis, but no sense getting greedy. They’re in business and it’s quantifiable. Nice growth. The most recent month plotted was June, 2017… but this may well have been current when it was delivered to Chris. I couldn’t find a new one on the website, and this presentation contains no email addresses or phone numbers (though does link to the linkedin profiles of the founders.)

If you’re keeping score at home, this is the third opportunity in this deck. It appears to be represented in a pie-chart, and that pie chart appears to be split in thirds. It isn’t labelled (on-brand at this point), and represents millennials, grown-ups and the canna-curious as three parts of a whole. Since curiosity is not an age demographic (people of any age can be curious), I’m going to go ahead and assume that this isn’t data visualization at all. But I still don’t know what it means.

I don’t know who’s titling these things, but the numbers in these boxes are straight forward, and it looks great. They’re getting more out of their customers than industry average. More than 2:1. That sounds fine. The only thing is… 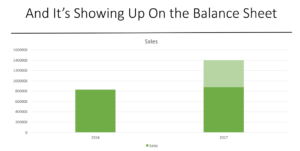 I doubt these people pulled $1800/member/year out of thin air. They probably arrived at it somehow and it may surprise them to learn that their audience wants to understand it as they do.

There’s more in here that is less than clear, but picking it apart would be redundant. The attempt at a geographic breakdown is interesting in concept. They clearly didn’t have enough data to do it right, so I’m not going to drag them for it. But a red-dot-plot job on an urban map would be a hyper-relevant way to look at a local retail market. EG may do something like that for a black market v grey market analysis of retail cannabis as the rules become clearer and full adult legalization rolls out. Stay tuned.

A desk-mate of mine, who doesn’t work for EG, saw me with the deck open as I was writing this and went on for 2 or 3 minutes longer than I wanted him to about how much he loved The Village. “They’re the best! The staff always knows what they’re selling… they’re nice… I love the Village. It’s the only place I go. They’ve got this kush that’s…(blah blah blah)”

I can relate to that sentiment, and I think most of us can. It’s an idea that reaches beyond cannabis and into the brick and mortar retail sector globally. Nobody ever went into a store to be ignored. Help customers find what they’re looking for, make sure they get what they need, and they’re going to come back. These new Amazon stores that eliminate humans are disconcerting to me. I suppose it’s fine for toilet paper and Frosted Flakes, but things like foot ware and bicycles take a knowledgeable sales staff to make happy customers. Cannabis is high-end stuff. It’s full of subtleties. One could imagine clients wanting to feel like they’re in the right hands. Besides that, it’s expensive. Try eliminating sales staff at Tiffany’s, see how far that gets ya.

But stats people don’t have feelings. We have spreadsheets.

The idea that The Village is a business that will grow in the coming months and years isn’t far fetched. They have a license to sell dope, and appear to be doing it at a 40% margin (though it’s difficult to tell because they didn’t put any numbers on the pie chart showing their “Good Margins, Too.”)

Brand loyalty is a thing, and not necessarily a quantifiable thing. Whether or not they can pull it off may come down to how the landscape changes in the coming years, what their competition is, and how the broader economy does, but one does not get the sense that Village Loyalists are going anywhere. Except for maybe down here to EG headquarters to tell me to, “Mellow out, man. The Village is cool and you’re being a real bummer.”

At the risk of putting too fine a point on it, I’m not making a call on The Village because they haven’t given me anything to do it with. They’ve got the right attitude. The deck is friendly and approachable like their staff, but a lack of charting fundamentals and relevant comparisons is making this pitch deck un-useable.