Cannimed had A Different Approach, Didn’t Go Down Without a Fight

In the period between Aurora’s unsolicited all-stock offer this past November 20 and Cannimed’s endorsement yesterday, Cannimed’s board of directors did some fine bull riding of their own. They hired Canadian activist investor / takeover consultants Kingsdale Advisers – practically the Angelo Dundee of corner men in a merger fight – and denounced Aurora’s paltry $600M all stock offer at every opportunity. Their extended courtship with Newstrike always seemed like theatre to us and, like any great production, the cast makes all the difference. Newstrike had promised the market that their full, yet-to-be-built footprint would be 20 times as large as their current active footprint, and spent a great deal of energy on marketing and promotion. The Ontario licensee, who has yet to sell a gram of dope, becoming the official marijuana company of The Tragically Hip has to be an all-time marketing move.

Implicitly, Cannimed was saying: “Ha! You think you’re the only loudmouth going on about notional production space? We can merge with one of those if we want… and cheaper!”

Cannimed was resolute, and over a little more than 2 months managed to secure an offer nearly twice the size, and 13% cash.

That’s fine work. Back in November, it was easy to call a $586M all-stock offer for a company with $4M/ Quarter in revenue an overpay and easy to call Cannimed foolish for not taking it.

But such pessimism lacks context. That type of fiscal prudence is what had landed CMED in this jam in the first place. If their best promoting peer was going to leverage their market value to assimilate all their hard work, Cannimed was determined to squeeze them for every million. CMED turned it on at the end, showing that they can ride the bull as well as the next guy, and absolutely belong on the same team as The Champ.

Bull riders are all balls.

There’s no room to get cerebral about it, just do whatever it takes to hold the hell on for as long as possible. Move fluidly such that your body position minimises the torque that the bull creates on your anchor points as he bucks. Move into the turns, not away from them, but it won’t work if you have to think about it. Run on instinct; pure feeling.

Aurora has been screaming as loud as they can that they are building a 800,000 square foot facility in Edmonton, and this market loves the promise of future capacity.

Clearly, Aurora isn’t the only one promising square feet, but check what they’re getting for it:

The Enterprise Value is the Company’s (live) market cap, less their net cash balance at the end of the last quarter.

Aurora is right up there punching with Canopy in terms of how the market is valuing the space they’re going to create. It appears not to care that they’re slinging less than half the product, because bulls don’t care about anything but bucking.

I’ve written before about my suspicions concerning Aurora’s production numbers, and got dragged for it on Reddit.

When Aurora calculates how much it costs them to grow a gram of dope, they back out the cost of product that they bought from other producers and re-sold. There’s nothing wrong with that, because they’re trying to calculate the growing costs for their facility… the trouble is: they never tell us exactly how much of the product they sell in any given quarter is bought and re-sold. Meanwhile, their production numbers are greater than their sales numbers. For example, they report having produced 1,009,585 grams in their most recent quarter, and selling 889,965.

Aurora couldn’t explain that to EG when we asked, and why in the hell should they? How is that supposed to keep them on the bull? They look like they’re in the growing dope business, but that’s only part of it. Aurora’s in the get-while-the-gettin’s-good business, and in the months leading up to this coup, they put on a clinic.

We had to knock a zero off the market cap just to fit it on the chart. That’s a $6.2 BILLION dollar valuation for a company that had $8.2M in revenue in their most recent quarter – their biggest to date.

When Aurora prints paper, Canadian financial institutions buy it, sling it to their clients, and ask for more. The October financing was announced as a $50 million bought deal, that would generate more than $143M for Aurora once the warrants were exercised. By the end of the week, they had maxed out an extended version and added a sidecar deal on the same terms. The warrants were in the money right away. On paper that October raise generated $169M, and they were just getting started.

The value just kept expanding as they diluted, so Aurora doubled down. If the market likes a private placement at $3, they’re going to love a convertible debenture at $5. Back to the well they went for another $200M. They forced conversion on the old in-the-money debs while they’re at it for another $115M. Why not?

That’s not a misprint. Cannimed raised no money during that period. CMED most recently tied up a raise a year ago, in January of 2017, at the time of their IPO. A plane-jane stock-for-cash deal, with no warrant, to raise $69 Million. Ostensibly, more than they needed to build out the 325,000 square feet they had planned. They were about 2/3 of the way there. Steady as she goes.

For their trouble, they got a hostile offer from a company with 1/5 the active square footage and big, loud dreams about more, who is somehow selling just under twice as many grams!

At the risk of beating a dead horse with a live bull, here are market caps of the participants in the the highest of profile merger story in the Canadian market, who each grossed, in the most recent comparable quarters, $4.7M and $6M respectively.

No way I’m calling this done, but the dust is settling on this chapter so it’s time to have a look at what’s left over.

Ordinarily, we’d use cash and debt to calculate an enterprise value, but Aurora’s financing activity make that harder than it sounds.

This table assumes that Zero Cannimed shareholders take the cash, and fully dilutes all of Aurora’s warrants and debentures.

(BTW: I learned that Aurora listed some of those $4 warrants. Here’s the chart for all you action junkies)

Here’s the production totals that “CannAurora” would have had in the most recent comparable quarters. 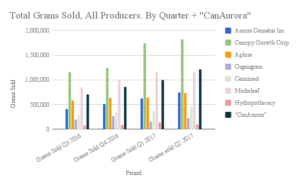 Their totals puts them up with Medreleaf in the most recent quarters, unit-sales wise.

Of the three (LEAF, ACB & CMED), Aurora is the only company whose disclosures mention the re-sale of product from outside suppliers.

How Much Longer Can This Last?

As long as it takes for this bull to shake us all off. I never thought it would get this absurd in terms of valuations, and certainly not this quickly, so there’s just no calling this.

Going forward, I’m looking forward to seeing how Aurora’s team does now that they have their hands on Cannimed’s facilities. If we project based on Aurora’s trailing 12 unit sales, the Cannimed enterprise is in line to move 4.5x more product per active square foot.