This morning, Quantum Minerals Corp. announced they have expanded their claims portfolio at their Irgon Mine site in Beautiful Manitoba, Canada. Nine lovely new parcels of mineral rights are now in their hot little hands. Since the new year, (only 12 days I know) I’ve found myself circling back to energy metals again and again.

I think I’ve figured out why, and today’s news is a good excuse to rant a bit.

As friends and family have been reading my work here, I’ve started to get the sorts of questions that lead to permanent feuds. Questions like “Should I buy this bitcoin stuff?” and “My buddy Phil is starting a weed business, is it a good idea to invest?”

Honestly, my blood runs cold at this sort of thing. Cannabis and Crypto, although dear to my heart, are not for the dabbler. There’s a lot of money to be made, and lots of opportunity, but you need to know your facts or you’ll get drubbed,

So what do I tell these folks? Usually I have a long winded speech which scared them off, but for those who persist – I tell them to start by looking at energy metals. Bitcoin gets the CNN headlines, but graphite and lithium demand is going up steadily and will need to be pulled out of the ground somewhere.

Lithium, it’s an energy metal AND a mood stabilizer. 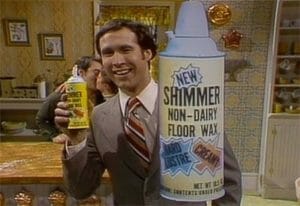 Here’s a snapshot of Lithium prices over the last year: 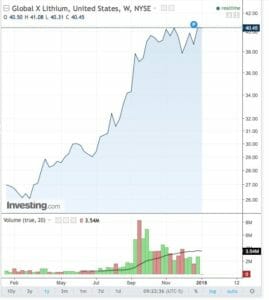 Notice anything cool? In the fall, the  prices soared. In October Chris noted QMC’s stock was lifting off on the spike and hopefully some of you got in and made some dosh here. After the initial run, things level off but a new market price floor has clearly been hit. Looks like if you could have invested in Lithium futures, you would be a big, big winner.

Since you can’t – Lithium is sold via contracts to the big players, betting on companies like QMC is how you get into this. 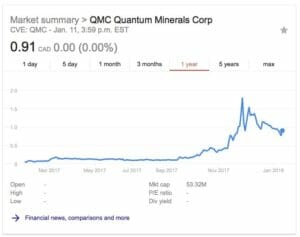 Same spike in the fall, same levelling off at a higher plateau.

I hear you say, “Dammit, you’re saying we missed the boat.” Well, sort of. But not really.

Coming back to my point on energy metals, the demand for battery commodities is only going to rise. Tesla’s Australian battery farm is outperforming expectations, with more on the way. UPS, Budweiser, Pepsi are all ordering Tesla’s trucks as fast as they can produce them (someday). A dozen chinese firms are doing the same work there, plus what’s going on in Europe at the same scale.

The demand for Lithium isn’t going anywhere. I think we’re going to see a lot of spikes similar to the one we saw this fall, and each time, the price floor will ratchet upwards. It’s why I think we aren’t appreciating the potential here, lost in the glare of shiny digital coinage and a haze of weed smoke.

In September we wrote about QMC’s mandate to go out and ‘Find Lithium’ based on historical data sitting in provincial vaults. On October 17th, QMC announced they had finished evaluating the Irgon mine site in northern Manitoba. The results at the time looked pretty good. Here’s what Bruce Goad said about what they found at the time.

Eight of the 2011 grab samples returned with lithium values greater than 2000 ppm. Sampling also indicated dikes with elevated rubidium (greater than 2000 ppm), beryllium (greater than 1000 ppm) and tantalum (to 280 ppm) which suggests that other dikes on the property will require additional evaluation. Samples breaching the upper detection level of the ICP-MS process utilized to acquire these elevated lithium, rubidium and beryllium results were not resubmitted for assay. All targets identified on the property will be re-evaluated.

Seems they were excited enough by their evaluation to lock down more of the site,

Although QMC owns the site 100% it didn’t have mineral rights everywhere in the area. Today’s announcement makes it clear that they think there’s lithium all over the place. The deal expanded the contiguous area where they have mineral rights to 2,647 hectares, a 378% increase.

So I guess that historical data was accurate.

Their release goes into a bit more detail  but essentially, these claims will lock up QMC’s control over several dikes that look promising, and were part of their 2011 exploration program. So they aren’t striking out blindly.

For your edification and interest, Here’s our map of the area: 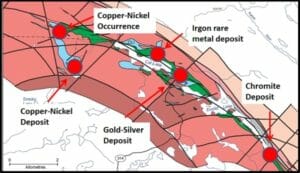 Here’s the historical info, taken from their release:

Between 1953 to 1954, the Lithium Corp. of Canada drilled 25 holes into the Irgon dike and subsequently reported a historical resource estimate of 1.2 million tons grading 1.51 per cent Li2O over a strike length of 365 metres and to a depth of 213 metres. This historical resource is documented in a 1956 assessment report by B. B. Bannatyne for the Lithium Corp. of Canada (Manitoba Assessment Report No. 94932). This historical estimate is believed to be based on reasonable assumptions and neither the company nor the qualified person have any reason to contest the document’s relevance and reliability. The continuing detailed channel sampling and a subsequent drill program will be required to update this historical resource to current National Instrument 43-101 standards. Historic metallurgical tests reported an 87-per-cent recovery from which a concentrate averaging 5.9 per cent Li2O was obtained. During this historical 1950 era work program, a complete mining plant was installed on site designed to process 500 tons of ore per day and in addition, a three-compartment shaft was sunk to a depth of 74 metres. On the 61-metre level, lateral development was extended off the shaft for a total of 366 metres of drifting from which six crosscuts transected the dike. The work was suspended in 1957, awaiting a more favourable market for lithium oxides and at this time the mine buildings were removed.

So what it looks like to me is that QMC was given the keys to an abandoned fort knox and being told “There’s gold in there, probably a lot, but we’ve never gone in and really counted it. Keep what you find.” (Except this is a metaphor, and gold is historical lithium data)

I think Irgon has the potential to be a sleeping giant. so if you do want to get into energy metals, this is a company to look at. If you do choose to invest, and you get freaked out, hey at least you would have a ready supply of lithium to chill you out.

FULL DISCLOSURE: QMC is an equity guru client, some of us own stock. some of us own an awesome collection of replica props from Star Trek. I may have wasted my life.