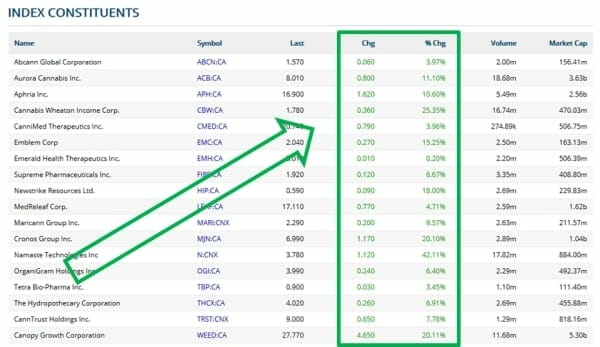 On a normal day, the S&P/TSX composite index trades about 300 million shares. On December 27, 2017, in the traditional post-Christmas lull – with many brokers still stumbling home from Mexico – a mere 129 million shares exchanged hands. But Canadian weed is red-hot.

Despite the low volume and the general flatness of global markets, Canadian weed stocks melted up in one of the most astonishing single-day sector surges we have ever witnessed.

Not one single stock in the Canadian Marijuana Index was down.

What caused the “melt up”?

Explaining that is a bit like trying to deliver a weather report from the heart of a category 5 hurricane.

There’s a lot of debris flying around.

According a December 27, 2017  Globe & Mail article, “Canadian regulators rejected Aurora Cannabis’s attempt to shorten the minimum deposit period to 35 days from 105 days for its hostile takeover of CanniMed Therapeutics.”

Aurora’s request, if approved, would have increased the likelihood of the hostile takeover by preventing CanniMed’s bid to buy Newstrike Resources Ltd.

Aurora offered to buy CanniMed for $24 per share in Nov. 24, but within days CanniMed adopted a shareholder rights plan, or a “poison pill”, viewing the offer as “coercive”.

Last week the investment firm Edward Jones, threw a bucket of cold water into the center of the party, highlighting risks in the Canadian marijuana sector.

As marijuana.com reported, “This significantly conservative outlook on behalf of Edward Jones comes on the heels of an announcement made by Statistics Canada, which stated that Canadians consumed up to $6.2 billion worth of cannabis in 2015. That amount is the equivalent of approximately 697.5 metric tons of pot.”

There are now hundreds of publicly traded weed stocks.

We have big brains.

But not that big.

We can’t keep track of them all.

Equity Guru wrote about weed investment opportunities before it was trendy.

Those who jumped in with us, have done well.

In our own small universe of heavily curated companies, the following five stocks jumped more than 10% on The Great December 27, 2017 Weed Melt Up.

Secured a License to Cultivate Medical Cannabis under the ACMPR

We believe that selling marijuana into a frontier market – will require branding expertise.  And this company has branding credentials up the ying-yang.

Effective Nov. 3, 2017, Emblem Corp. has been granted a licence to sell cannabis oils. As announced on December 19, 2016, Emblem was initially granted a supplemental license for the production of cannabis extracts.

“Securing this license is an important milestone of our strategy to provide high quality, differentiated cannabis products, in a variety of formats. Our clients will be able to rely upon a selection of cannabis oils, including those from CBD dominant strains, THC dominant strains and strains with both CBD and THC content. Cannabis oils and related formulations provide a level of consistency and dosage accuracy that cannot be achieved with dried flower, and is a substantially more convenient and precise consumption method,” said John H. Stewart, President of Emblem’s Pharmaceutical Division.

On November 14, 2017 we drove two hours east of Los Angles to a tiny desert town (pop. 30,000) called Adelanto – famous for having three prisons inside its city limits to inspect LDS’s cannabis production facility.

LDS makes infused strips (similar to breath strips) that are better for the lungs than smoking and also makes it easier to monitor the dosage and control the purity of the product.

The company is growing medicinal ingredients.  This means quality control from seed to sale.

“Golden Leaf Holdings is focused on first mover advantage and developing the lowest cost production of highest quality oils, an achievement made possible by a competitive advantage rooted in economies of scale and attainment of intellectual property rights.

Through core strengths that leverage a value-added manufacturing model, the company aims to create a differentiated brand portfolio.”

On November 27, 2017 we wrote, “GLH announced its subsidiary Medical Marijuana Group (MMG) received the cultivation license for its massive grow operation in Ontario. The news sparked a big spike in GLH stock today, with a rise of over 25% by close of trading.

“This is a big deal because it signifies the heavy lifting is done for GLH. They’ve cleared all the Health Canada regulatory hoops they need to start building their facility. The only thing left will be for Health Canada to inspect the final production plant.”

Tinley’s other product, Hemplify, is a non-THC health drink containing hemp stalk, terpenes, essential oils, and other non-psychoactive constituents.  The product is sugar-free, vegan, non-GMO, gluten-free and is jammed with Vitamins C, D and B12), Omegas and electrolytes.

On October 25, 2017, Tinley released an operational update, announcing that Hemplify, “is currently being set up for shelf placement at a 14-store premium grocer, representing the Company’s largest customer to date.”

New waves of institutional money are pouring into the weed sector.

“The ETF intends to mirror returns from the Prime Alternative Harvest Index. According to the fund’s managers, the index “tracks companies likely to benefit from the increasing global acceptance of various uses of the cannabis plant.”

Full Disclosure: DOJA, EMC, LDS, GLH and TNY are Equity Guru marketing clients, we also own stock in these companies.