Zinc is an anti-corrosive metal, added to iron or steel to prevent rusting.

We first wrote about Zinc One (Z.V) on May 17, 2017 – stating that “there is a serious zinc deficit looming – and fortunes can be made if you know how to play it.”

To support our assertion, we unearthed an obscure supply-deficit indicator: the “smelter treatment charge”.

Zinc miners pay a fee to convert zinc concentrates into pure zinc. The 2017 benchmark smelter treatment charge is 30% lower than it was in 2015 ($172/tonne vs. $245/tonne).  There is so little zinc around that miners have been able to negotiate a 30% reduction in the cost of smelting.” 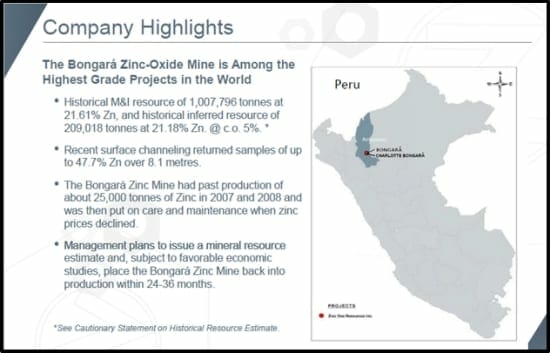 In the following months, the stock price of Zinc One drifted listlessly.

To put this in perspective, Teck’s (TECK.NYSE) Red Dog Mine in Alaska produces an average head grade of 15% zinc. In 2016 the mine made a gross profit of about $500 million.  Could Zinc One be the new “Red Dog”?  In our opinion – the answer is “Yes”. 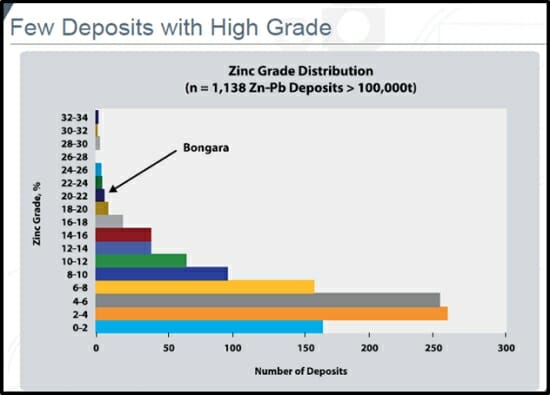 A couple of weeks ago we re-stated our opinion that “there are strong reasons to invest in Zinc One.“

On December 13, Zinc One announced that it has received a permit for 124 drill platforms, allowing for three holes per platform with an average drill depth of about 25 metres.

“This is one of the most important milestones we have reached thus far,” stated James Walchuck, Zinc One CEO, “We are confident that we will be able to confirm the historic resource – 1Mt of 21.6% Measured and Indicated and 0.21Mt of 21.2% Inferred.”

The drill program is significant because the targeted Mina Chica and Bongarita sectors have never been drilled.  A new resource estimate according is anticipated by the end of Q2 2018.

On December 19, 2017 Zinc One reported results from its surface-sampling program the Bongará Zinc Mine Project in north-central Peru.

The above results were in the southern end of a 1.4-kilometre long trend of zinc trend called Mina Grande.

Selling Zinc in the middle of a BitCoin hurricane is a thankless task, but despite the deafening roar of blockchain and cryptocurrencies – Zinc one has been steadily gathering momentum throughout the month.

The impending shortage of zinc is happening because two of the world’s largest zinc mines have run out of ore (Australia’s Century mine, and the Lisheen mine in Ireland).

Zinc One CEO, Jim Walchuck has recently been on a roadshow, giving presentations to institutional investors in Toronto, New York and London.

Peru’s Energy and Mines Minister Gonzalo Tamayo stated that Peru is focused on, “the recovery of mining investment in 2018.”

According to Mining.com, Chinese year-to-date zinc production is down 1.3% to 5.65 million tonnes.

Exploration companies are sometimes described as baby turtles scuttling across the beach toward the ocean.

Zinc One has hit the high tide line, and it’s moving fast.

Full Disclosure:  Zinc One is an Equity Guru marketing client, and we own stock.