Cabral Gold (CBR.V) is the new hot chick in town

When a brand new junior explorer talks about its successful neighbour, the subtext is usually: “We can be as great as they are”.

In the case of Cabral Gold, the shout-out is bigger and louder: “We can be even greater than our neighbours”.

There is hard data to support that claim.

Before we get into the data, and the neighbours, let’s review the news.

On December 7, 2017, Cabral Gold announced that it is engaging Micon International to update its Resource Estimate for Cuiú Cuiú project, Brazil.

The updated resource will incorporate an additional 22,068 meters (72 holes) of 2011 diamond drilling that took place after the issuance of the 2011 technical report.

The red holes on the map below show the location of these “additional” drill holes. 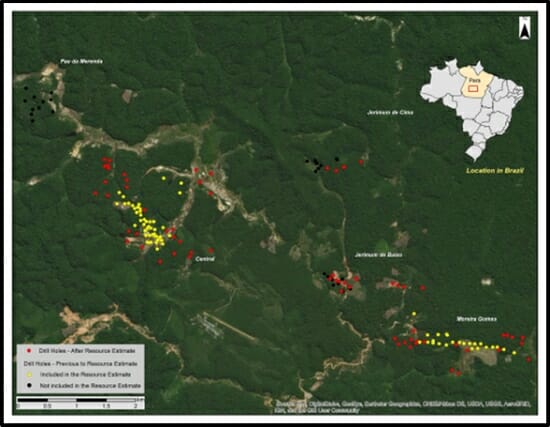 We don’t know the exact price tag of the 72 holes, but based on comparable drill programs in Northern Brazil, we estimate $8-12 million.

The market cap of Cabral Gold is only $10 million.

So that’s a significant free data dump for Cabral shareholders

The neighbour we talked about earlier is Eldorado Gold (ELD.NYSE), a $1.2 billion global gold developer with revenues of $84 million last quarter.

Eldorado controls the Tocantinzinho gold deposit which currently has Proven and Probable reserves of 39.6 million tonnes @ 1.43g/t gold for 1.82 million ounces. The company received its construction license in April 2017.

According to the Brazilian Department of Mineral Production, during the gold rush from 1975-1998, 25 million ounces of placer gold were produced in the region. 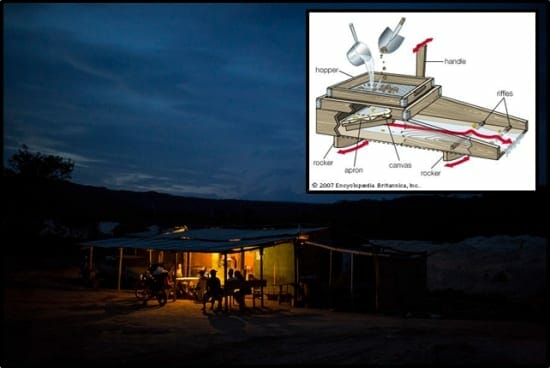 That doesn’t prove that Cabral’s final resource will be 1,000% bigger than Eldorado’s – but it does make you stop and think.

Placer gold is the ultimate “path-finder.” It is created when a lode deposit is eroded by weather, leaving behind “heavier” minerals – like gold – to be transported downstream.

If Brazilian artisanal miners were scooping buckets of placer gold out of the rivers, it suggests there is a monster-lode of bullion somewhere upstream.  And probably not buried too deep.

Cabral is also benefitting from Eldorado’s mine-supporting infrastructure.   ELD has constructed a new 70km road to the Tocantinzinho project. The Cuiú Cuiú project is accessible through a spur road.  There are also 5 new dams planned on local rivers, projected to generate a total of 10,682Mw.

This infrastructure spending is part of a larger trend which includes a $4.3 billion railway project connecting grain-grower in central Brazil with northern ports.

The Central and Moreira Gomes deposits are the most highly developed.

Central extends over a strike length of at least 800 meters – is 50 to 70 meters wide, with a maximum known vertical depth of 450 m.

The dimensions of the Central and Moreira Gomes deposits are as follows:

Central extends over a strike length of at least 800m in a northwest-southeast direction, and is 50 to 70 m wide, with a maximum known vertical depth of 450 m. 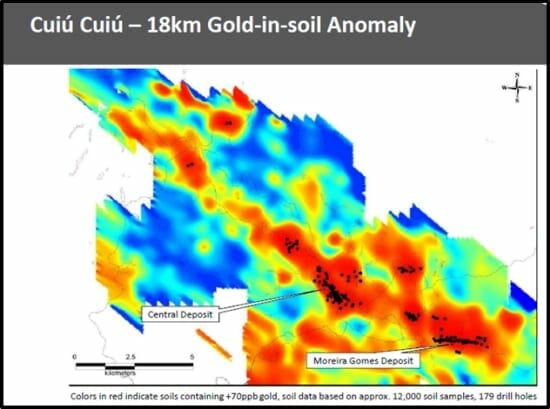 Both zones remain open along strike and at depth. In the course of the previous exploration work a gold-in-soil anomaly 18 kilometer in length was identified much of which has still to be tested and excellent drill results were returned from at least 6 other target areas which require further work.

Heads up: for those of you without geology degrees:  an 18-kilometer gold-in-soil anomaly is not normal.

We talked recently to Cabral’s CEO, Alan Carter who is a 25-year mining vet with experience with experience with Rio Tinto + BHP Billiton. a director and co-founder of Peregrine Metals which sold to Stillwater for US$487 million.  Carter is also the founder and CEO of Magellan Minerals Ltd, and co-owner of 3.5% NSR on Eldorado’s Tocantinzinho.

An aggressive trenching program is planned for Q1, 2018 as well as Infill soil sampling.  Following that, Carter plans to do an additional drilling of up to 8000 meters with the objective of further expanding the existing resource.

We asked Mr. Carter what the next 12 months look like for Cabral.

“The first priority is to update the 2011 resource estimate, and we expect to do that in the first quarter of 2018,” stated Carter, “We’re also going to execute a trenching program.  A few years ago, this would have been much tougher because there was only a dirt highway.  We know have good road access, so we can bring in large mechanical excavators which can quickly develop trenches.”

Braggadocio is synonymous with stock promotion, but there is hard data to support the claim that Cabral’s asset may be bigger than Eldorado’s.

If that’s the case, this is, to put it mildly, a good entry point.

Full Disclosure:  Cabral Gold is an Equity Guru marketing client.  We also own shares in the company.