Cuba Ventures (CUV.V): Taking on Western Union with blockchain to the Caribbean

Any time I get an email with ‘Western Union’ mentioned, it goes straight to the spam folder. This process is automatic and deliberate.

This is because Western Union is bullshit. It provides a service, but it does so in a way that wouldn’t be out of place in the 1950’s or the robber baron era.

It exists almost entirely to screw people out of money in order to send money, usually to Nigerians pretending to be princes who want to send millions of dollars to seniors, or centerfold pinups who really love you though they’ve never met you, or to your kid backpacking in Myanmar who somehow forgot his wallet on a train and needs $500 to cover his bar bill.

In fact, so much of the Western Union reason for being is connected to scammery, that they have to put out public service announcement ads to make it look like they’re concerned for you.

I’m not even sure how Western Union continues to exist in a just world, without the governments of developed countries beating it down for unrestrained third world exploitation and bad business practices.

‘Oh, well done Jose. You’ve managed to save $100 to send to your family in Guatemala while working three jobs and commuting an hour to and from your basement suite. Sure, we’ll send that money for you… but it’ll cost you $20.’

Here’s Western Union being ‘cool’. They have an emoji and everything!

Yep, Western Union is horrible. But it’s also a thing of beauty.

Because when one company owns an industry like it does, and has done nothing to innovate or promote customer loyalty or be a good corporate citizen, it’s ripe for destruction by an interloper.

Think Blockbuster, which closed down all the mom and pop video rental stores and staffed itself with know-nothing teens and had 58 copies of every Adam Sandler film and none of that Oscar winning documentary you wanted to watch, and kept everything on ‘new release’ shelves for two years at twice the price, and hit you with late fees relentlessly…

And then Netflix came and it was GONE.

Think Clearchannel, which did the same with radio, eating up every station, killing the local staff off, setting everything to autorepeat fifty songs relentlessly and then one day… BOOM, along came Spotify.

Every industry faces this moment of death. The guy who used to deliver ice to my grandparents never saw the refrigerator coming. Kodak owned the patent to digital cameras and didn’t see them coming. Five years ago, nothing was more valuable than oil companies, while today there are just two gas stations left in downtown Vancouver. Ford and GM were the most valuable car companies in the world for most of a decade, until Toyota came along, and then Tesla. My dad sold encyclopedias door to door to pay his rent. I always wondered how it was that, when Yahoo came along, the Encyclopedia Britannica people didn’t buy it up and own the world forever. Instead, today, you can’t find an encyclopedia in the library anymore, let alone on your bookshelf.

Industry always evolves, and the leaders of industry have to evolve to stay leaders. When they don’t, and instead focus on squeezing every last dollar from customers, it means they’re going to eventually be confronted by a competitor who does things better, cheaper, faster, and drinks their milkshake.

They drink it up!

Which brings us to Cuba.

So there are a load of Cuban expats living in the United States right now. A large amount. In 2015, the number of expats and regular Cuba-US travelers sat just above 500k.

And they, in overwhelming numbers, will send money back to their family to help them live well, to the tune of some $3.3 billion that same year.

Then, the only real way to do that was through Western Union, which would shave anything up to 20% off the top, good for $600m+ in fees

And that’s just Cuba. Remittances to Mexico are some eight times higher. . 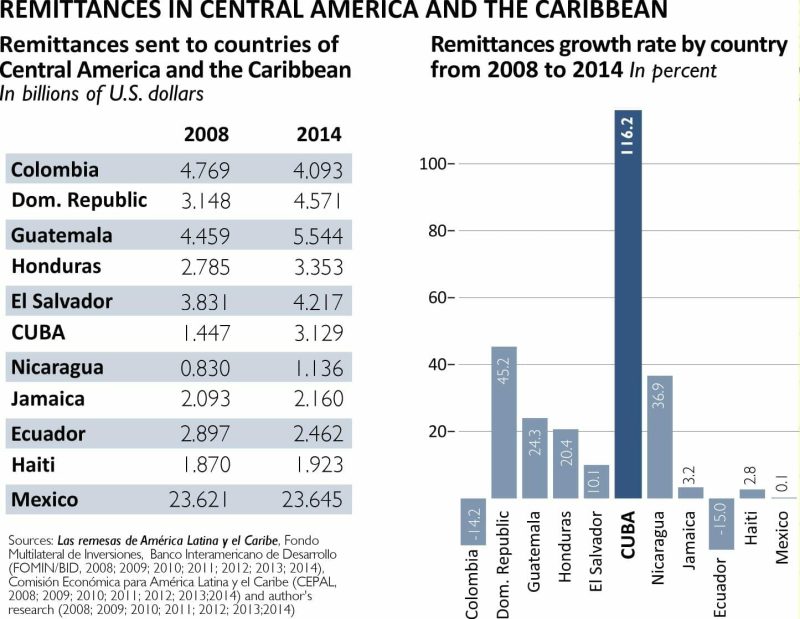 That’s $58.7 billion in remittances in 2014, just in South and Central America, and Mexico.

And that’s nothing. Globally, the World Bank says some $416 billion was sent through remittances in 2016.

But let’s get back to Cuba.

Cuba Ventures (CUV.V) was originally created back in 1995, when the internet was still a child, and Steve Marshall managed to talk his way into becoming the government approved guy for setting up tourism websites for regions across Cuba, handling online travel bookings, and marketing tourism for the nation.

This evolved into [CUV subsidiary] Travelucion’s 432 domains and multilingual Cuba centric websites which generate over 30 million page views a year and have been developed to corner niche segments relating to almost every conceivable facet and location in Cuba. Steve’s intention was to own a proprietary network of web assets which operate in unison to channel visitors toward the company’s e-commerce booking sites.

A nice little earner. And that’s what took the company public last year.

But that government connection and twenty years of experience working with the travel industry and dealing with regulations in how to move money from the western world to Cuba has put CUV in an interesting place today. Because, today, the world is uber focused on:

How can Western Union continue to exploit the immediate short term financial needs of the developing world? Because common currency is centralized. It’s restricted and restrained and nothing moves without paperwork and permission and fees.

But in an era when currency is becoming decentralized? Now it gets interesting.

CUV is building out a blockchain network that allows Cubans and their kinfolk to move money without the need of Western Union’s say-so, at a much reduced fee, almost instantly, and using cryptocurrency.

Want to send money to your family in Havana?

Take it away, Steve Marshall.

Cuba Ventures Corp.’s fintech division has signed a definitive agreement with Vesilen Investments for its revolutionary blockchain-based mobile application called Revolupay and corresponding Web-based system, to target Cuba’s $3.4-billion (U.S.) remittance market, the $750-million (U.S.) Cuban private sector and the Caribbean tourism industry. Connected with the structure will be the proprietary cryptocurrency CU coin for intended use in the multibillion-dollar tourism markets of the Caribbean and Cuba. Blockchain technology has the prospects to be highly disruptive in the multibillion-dollar remittance market and cumbersome 11-currency Caribbean currency exchange markets. The company plans to be the first to implement a blockchain-based platform specifically for the Cuban and Caribbean markets. Cuba Ventures has signed a definitive agreement with Vesilen Investments for co-development of this blockchain platform and Revolupay app.

In may countries, the government wants to get in the way of cryptocurrency precisely because of its ability to move unrestricted, and to ignore established financial market players. The Cuban government shares no such concerns, as it’s been blocked out of the financial world by US embargoes for decades. What CUV is putting in place opens Cuba to the world.

Current stage of development of blockchain-based Revolupay and CU coin:

But, I hear you say, why does anyone need Revolupay when they can use Bitcoin exchanges?

To answer that I’d ask, why does anyone use Western Union when they can use Paypal?

Because not everyone in the world has a laptop at hand, Sparky. If Revolupay can take your US dollars, convert it to Bitcoin (or their own proprietary CU coin) to move it across borders, then convert that back to Cuban currency for physical pickup, that’s a decent business.

And it wipes out Western Union.

Cuba is the perfect testing ground for CUV’s plan, because of Marshall’s connections to the Cuban government and long time business and reputation in that country, and because the government has no intention of standing in his way. If Revolupay gets big pickup, other Caribbean nations will likely follow suit, which gives a great launching pad for South America proper.

Will Western Union see them coming and employ millions of dollars to head them off at the pass?

Unlikely .Getting a huge legacy financial company like that into the cryptocurrency world would take some heavy bureaucratic lifting, and likely face the ire of the US government, at least initially. It takes a lot of steering to turn a ship that large, and it won’t take much on the tech side for CUV to do what they’re promising.

Often, even when faced with a new contender, a decades old near-monopoly will have to get past its own ego before it even admits there’s a threat. Netflix didn’t appear overnight and shut Blockbuster down, it took a few years for Blockbuster to even respond to them. Cable TV didn’t kill network TV, it took twenty years for network TV to even believe it would be threatened. IBM didn’t see Microsoft, which didn’t see Yahoo, which didn’t see Google.

The kicker here is, it doesn’t matter if Western Union topples or not. With an $11m market cap currently, and business being done for real revenue currently, and a minimal investment needed to seed those 400+ websites and their 30 million annual page views with “Traveling to Cuba? Use CU Coin to bring your money with you” ads, CUV has the means to establish a genuine blockchain-based business that pushes hard into a market that wants it there, for people whose lives depend on moving their money as cheaply as possible, in a country that is REALLY hard to establish a new company in if you don’t know someone high up.

Let’s do some math. Existing US rules limit how much an individual can send to Cuba to $2k per quarter, or $8k per year.

If 50k people send $2K through Revolupay, with 10% going to CUV, that’s $10m in earnings per quarter, or the equivalent of their current market cap.