We’ve handed out plenty of bouquets to Creso Pharma (CPH.ASX) since initiating coverage – time for a brickbat.

That’s how we roll here at Equity Guru – client or not, if we catch you out we call you out.

[Ed – We put out a new piece on the back of the Australian Financial Review exposing the links between Assad Tannous of Assena Wealth Solutions Pty Ltd and Creso Pharma. Worth a read, and you can find it here]

A quick recap: Two weeks ago the stock caught a flyer and jumped above the one dollar mark, doubling in the space of three trading days on the back of a flurry of news releases, including one announcing a Strategic China Distribution Partnership. Let’s come back to that one later.

We put out a piece on the day it topped out, shouting it’s virtues from the rooftop. Also suggested the company was likely to announce a capital raising (“CR”) in the near future. By near future we didn’t mean the next 4 hours. Caught us by surprise, and we updated our piece saying the afternoon sell-off looked suspicious in light of the new information.

OK, we were surprised! The morning after we went to press with this article, The Australian Financial Review (afr.com) Steet Talk column reported Creso was about to tap the market with a $15 million CR, priced at $1.10 per share, representing an 18% discount to Wednesdays closing price of $1.34.

While this makes sense, so does the price action of yesterday afternoon when it appears the whisper got around. We thought the 30 cent fall in late trading didn’t make a lot of sense. Until now.

When CPH begins trading again expect the SP to hit the $1.10 level in short order. It’s doubtful that ASIC, being the toothless tiger they are, will investigate who was hammering the stock for those last few hours.

The stock was halted for 3 trading days then suspended. Standard practice, but boy didn’t that suspension scare the bejesus out of all the newbies over at Hotcopper. We were all young once.

Insto’s and SI’s (sophisticated investors) were tapped for 15.5 million and now the riff-raff have until the 19th December to decide if they want to be cannon fodder for the remaining 2 mill or so.

When CPH resumed trading it continued its downward trajectory. We recently stumbled across the excellent blog of Bryce Edwards. One of the rules he learned (the hard way) is known as SFAQL (Sell First Ask Questions Later).

Retail are now being played as fools, being asked to buy shares for $1.10 which are trading for under a buck (closed today at $0.94).

Those people who sold after trading resumed aren’t looking so crazy now. They decided to SFAQL. Many would gladly take a buck thirty or more now the price has fallen below one dollar. 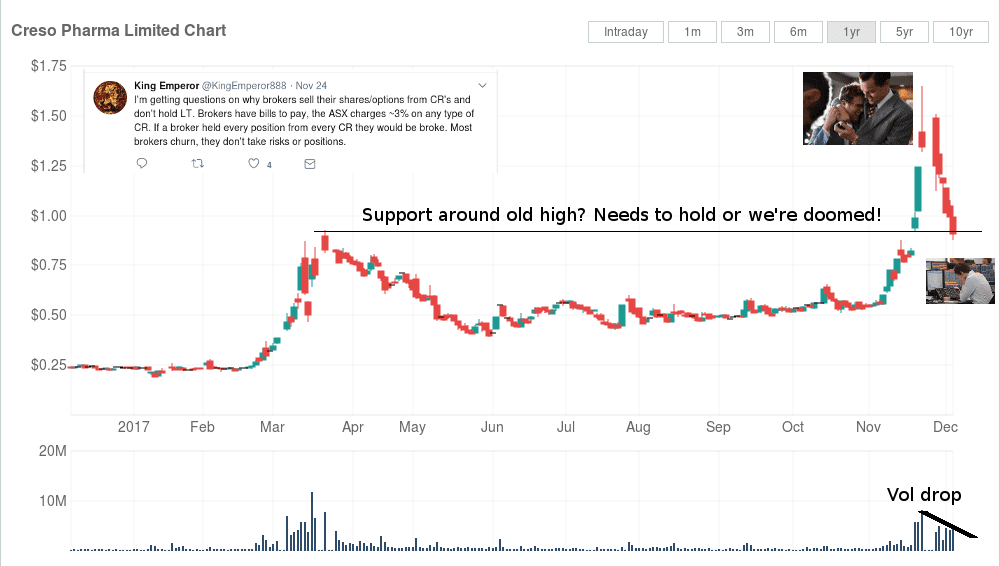 So what are the details of the Share Purchase Plan (“SPP”)?

As per the press release

Under the Plan, Creso is giving Eligible Shareholders the opportunity to purchase up
to $15,000 worth of Shares at the same price as the Placement, irrespective of the size of
their shareholding, without incurring brokerage or transaction costs.

Those who participated in the previous CR (March 2017) face further restrictions. All other shareholders can apply for 15K worth. (Try not to laugh)

Should retail investors stump up for stock @ $1.10 when it’s trading below a buck?

Unless you take the altruistic view that putting cash in the company’s pocket is better than greasing the palm of a desperate seller.

And from the company’s perspective? Embarrasing, surely.

Bottom line: The timing of the CR announcement leaves a sour taste in shareholders mouths. The stench of pump is well and truly in the air.

A few things have popped up on our radar in recent weeks, and we feel shareholders should be aware of the following:

There was a movie but you Millenials probably haven’t seen it. Some strange things played out in the last few weeks with respect to Creso’s China Distribution announcement.

There’s the headline, the sound-bite. Algo’s were all over this thing. The stock opened at $0.94 after closing the previous day at $0.82. A nice bump.

Then on the 23rd November the board of Kingdom Holdings released a statement. which concluded:

“the Group has no intention to enter into any agreement with any third party for distribution of healthcare therapeutics and products across the PRC.”

By this stage, CPH was halted as part of the CR.

Back to you Creso, who as part of a long-winded statement to the ASX upon trade resumption said:
(emphasis ours)

Further to the announcement lodged with ASX on 20 November 2017 in relation to the partnership with Kingdom Creative Co Ltd, the Company provides the following update:

Creso was first introduced to Mr Ren Weiming (“Mr Ren”), the Chairman of Kingdom Holdings Limited (“Kingdom Holdings”), a Hong Kong listed company. Over the past four months, Creso Pharma and Mr Ren have been in discussions,in relation to a collaboration for Creso Pharma to enter the Chinese market. Creso and Mr Ren agreed on a strategy for Creso to partner for distribution and other collaborations in China.

Maybe you’re thinking: You’re being pedantic Amos. Not the first time I’ve been accused of it, nor the last.

Hang on a minute. There were talks. About something. Details? Can’t find anything solid.

There’s this though: (emphasis ours)

They will contain hemp seed oil, in addition to a number of defined vitamins and minerals in proprietary Swiss delivery technologies, but no CBD, THC or other cannabinoids. Hemp seed and hemp seed oil in China has long been regulated as a ‘Traditional Chinese Medicine” (TCM)

A huge red flag when a 3rd party has to put the kybosh on a market announcement. Shame me twice.

Buddhism teaches us to question everything.

Q: How informed was the market with respect to this Chinese distribution agreement?

It’s not a good look for a company to release a PR and not have all their ducks in a row. Price sensitive information, y’all.

• Is Blumenthal a good fit at the board level?

The question needs to be asked: Is this a conflict of interest? While EverBlu didn’t participate in the CR, they still receive a tidy sum (6%) for their efforts2.

Q: When Blumenthal acts, does he act in the best interest of CPH shareholders or EverBlu?

We contacted Mr Blumenthal at Everblu Capital requesting clarification of this issue. The company declined to comment.

• Does participating in the SPP (Share Purchase Plan) make any sense now?

Q: Why buy above the current market price?

Don’t worry folks, it’s underwritten by Energy Capital Partners, who will have to soak up any stock the unwashed refuse to purchase.

Heres the excerpt from an email conversation I’ve had with the Turtle, a HNWI1 who is also long the stock.

Conversation begins prior to stock re-listing after halt for CR
Me: Get ready for all scenarios but I see it trading in the 100 – 110c range. Just a feeling..

Me: There’s a good argument to be made for a floor at 110 due to instos defending their purchases. While some hard data would be good, I feel that in about 95% of cases a SP retreats to the CR level when new capital issued at a discount to current price.

Turtle: But if you honestly feel they will come back to 1.10 (95% is pretty high chance) then should we sell … especially knowing we can rebuy some at guaranteed 1.10 rights.

Me: I don’t have a crystal ball and I don’t want to be too smart. Like I said it won’t matter in six months. Highly likely the SP will be up there on the back of push to legalize rec weed in Canada, esp as Creso have chops in Canadian space with their purchase of Mernova.

then a few days later he quipped with:

Me: the stock whisperer .. haha it’s the CGT which stuffs things up. Hit my target, eh

We doubt we’re the only shareholders surprised by the speed and size of the drop since the CR was announced. It even caught out Assad Tannous, whose Twitter feed has been eerily silent on the $CPH front since the stock came back.

We were surprised by one thing, though. There was no support at the $1.10 level.

In the course of things, we’re hopeful this is just a minor hiccup. It’s time for the company to buckle down and deliver on the promises they have made to shareholders.

We won’t talk about terpene infused chocolates or hemp flavoured beer. #gimmicks (Hint: they also contain no THC and/or cannabinoids)

Strategic Agreements, Letters of Intent and the like are all well and good – but what we really want to see are products and profits, underpinning our faith in backing the company during its embryonic stage.

What’s the saying? When the time comes to buy, you won’t want to.

This will either be a great place to add some CPH to your portfolio or you’ll come to realise who the sucker is sitting at the table.

As longs, we hope it’s the former.

Full Disclosure: The author of this article is long the stock (CPH.ASX). Creso Pharma is NOT an Equity Guru marketing client.

1. High Net Worth Individual
2. “EverBlu Capital acted as Lead Manager for the Placement, and will receive a capital raising fee of 6% of total funds raised. Everblu did not participate in the Placement.” source: http://bit.ly/2jRR6EH