Bitcoin bubbles, even in Bangkok 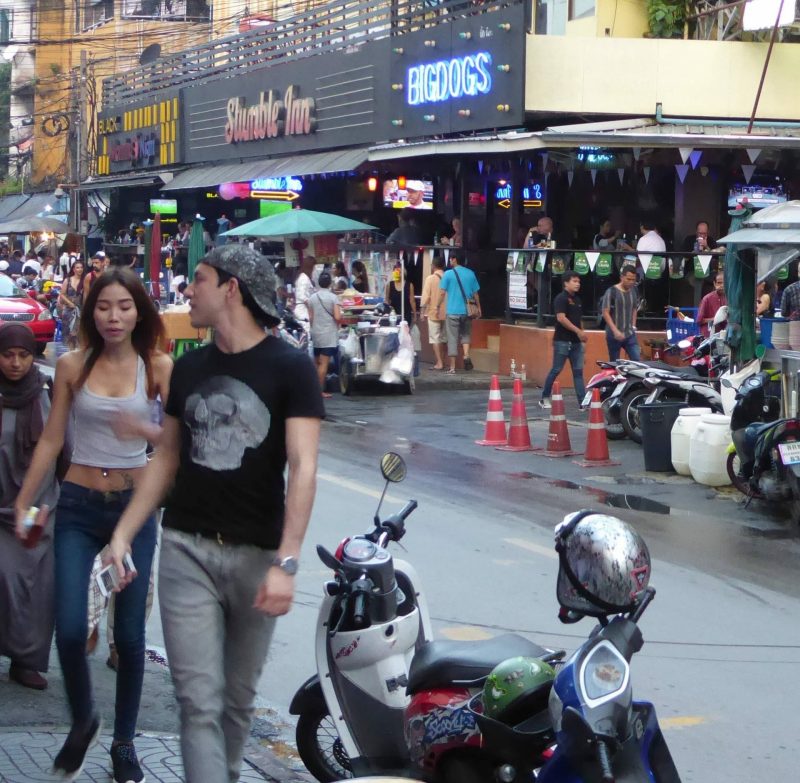 It’s payday Friday, the one day a month I like to escape my 25m2 cell and indulge a favorite pastime – people watching. After cramming onto the subway I alight at Sukhumvit station and join the mass of people trying to get through the turnstiles.

Unlike the Chinese, Thais are an orderly bunch.

Surfacing from my subterranean sojourn my senses are hit simultaneously with two things: the overwhelming humidity and the whiff of possibility that finding yourself in Bangkok on a Friday evening always delivers.

Declining the thought of riding the skytrain a single stop, I decide to walk up a thirst, making my way through Times Square (a poor imitation?) onto an overcrowded footpath where one must compete with errant motorcycles for space.

Dao, one of the service girls, has quickly attended to my need for an icy cold Leo (my preferred local brew) and half the contents are demolished in a single gulp. No sooner have I started to relax, when Angry John, another expat, spots me, yells and waves his hand furiously. I’ve managed to avoid him for 6 months, once even darting into a 7-11 store when I saw him coming my way.

“Mate you owe me a thousand (baht) and I need it now, haven’t been selling many T-shirts lately. You got it?” he barks. I reluctantly open my wallet and hand him a quarter of my disposable income for the evening, courtesy of a bet made many months prior that the price of Bitcoin would imminently collapse.

“Where you been anyway? No-one’s seen ya. Must owe a lot of people money”. “Health problems,” I say. Both are true – let’s leave it there.

As darkness falls I move on to the Tavern, where I’m guaranteed to come across a few Americans who have no trouble holding a conversation. Angry John joins me, looking for Richard (a yank) who still owes him 3,000 Baht from Trump winning the election. Not sure if he’ll ever collect on that one.

With half a dozen beers already under my belt, I decide to switch to whiskey and order Black Soda, Tinglish for Johnny Walker Black and soda water. We get to talking with Mike, a young buck from New York. He’s here for a few months. “Working?” I ask. “Nah, trade crypto-coins. Made a heap over the past year and wanted to enjoy myself for a while.” he tells me. It’s the new cash, he says, and is going much higher.

The young guys over here used to be poker players. That gig was profitable for a while and anyone with a mathematical mind and the ability to oversee an array of screens, multi-tabling tournaments into the early hours of the morning, could make a decent living.

Until they shut it down. Overnight. On Black Friday (April 15, 2011) online poker changed forever, taking the livelihoods of many with it. The Feds came for the cash – but it wasn’t really cash, it never really existed, did it?

It’s past midnight and I’ve crawled through a handful of bars along the soi, swapping my cash for smiles and making promises I can’t keep.

I pour myself into a taxi and exhaust my vocabulary of poor Thai hopeful of reaching my destination. At least he’s turned on the meter. As we snake through the concrete jungle at a rapid pace, Somchai, the driver, starts chatting with me. He has three kids and his wife runs a noodle stand in Chinatown. He could use some extra cash and asks if I think he should put what little extra he has into $BTC

I smile, knowing we’re almost there.

Horrific hangovers and Bloody Marys are perfect companions. After stumbling to the fridge and pouring the remaining tomato juice into a dirty glass I chuck in a few ice cubes and a healthy dose of celery salt. Then the vodka. A generous serve of Tabasco and a dash of the black sauce. Where’s the swizzle stick? No matter – a spoon will suffice.

Instant gratification. We’re all junkies of some sort. Don’t judge me.

There’s a knock at the door and a flurry of spoken Thai. The end result – one of the guys down the end of the hall is having some computer trouble. Can I take a look?

Turns out Chet is running a rig I can only dream of owning. Cost him 100K (THB) he tells me – a fair chunk of change in these parts. Puts my Rasberry Pi to shame.

He’s mining Bitcoin, one of his mates at work got him into it. Making 1,200 THB (USD 30) a week. He’s not worried as the price can only go up. Saying nothing, I make a mental note to get him to buy me a few beers next weekend.

The problem – a loose cable, thankfully. 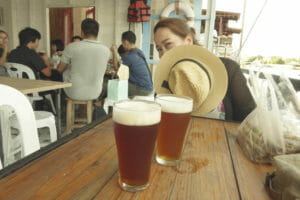 The wife drags me out to Koh Kret, a hidden gem few tourists know. We find Chitbeer, a craft brew paradise run by a guy named Chit. Funny thing – brewing beer (on a small scale) is illegal here in Thailand? (so is prostitution, go figure!)

Suddenly a few coldies straight off the tap appear at the table. They look good, taste even better.

She tells me she paid in bitcoin. I don’t ask, don’t want to know.