This is in reaction to Aurora’s hostile bid, launched Friday. CanniMed is definitely not amused by the all stock deal. They say it’s based on a wildly inflated overvaluation of Aurora shares. They say their deal to acquire Newstrike is a better option for their shareholders.

Earlier this week, Chris had a really good rundown of the situation when it was announced.  Today is a sign CanniMed is really ready to drop the gloves and do what it takes to survive.

The fundamental question hasn’t changed. In light of today’s announcement, do you back Aurora or CanniMed.

If you are a CanniMed shareholder, Aurora will swap your paper for $24 worth of theirs, in ACB stock. Once the new plan goes is approved, the amount of shares in the pool will double. That’s another 22 million shares for any potential bidder to contend with.

Both stocks are down today, but let’s see how the news worked out in the markets. 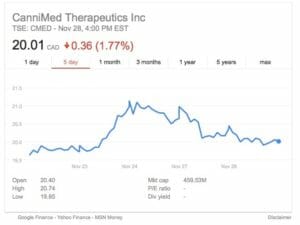 Pretty much $20 even, give or take. Now let’s peek at Aurora: 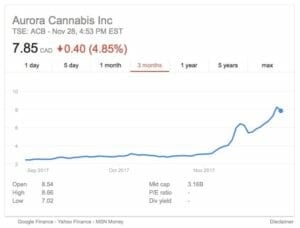 As Chris noted, ACB is currently sitting at near the top of the potential shorts list for its exchange. There are 400 million shares out there, and only 22 million shares (until they release the poison pill) out there for CanniMed.

For me, the numbers don’t actually look that great for Aurora. If and when they do get shorted, they are going to pull a lot of folks down with them, and it could gut their actual business. I’d have to give the early lead to CanniMed here. The ACB deal doesn’t seem like a deal for anyone except straight up profit-taking, but as an all-stock deal, even that can be iffy.

It was a smart move to try to shut Aurora down, and I think if I held CanniMed, I’d wait to see what else the board has cooked up. If they are this passionate about defending their company, then I want to see how passionate they will be to make money too.

We’ll see if the big money behind Aurora‘s bid is willing to swallow this bitter pill.

Full disclosure: I don’t own any stock in either.