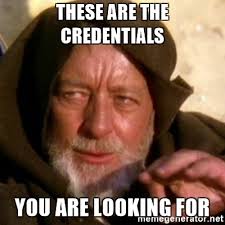 Stocks are a little like children. You have your favourites and when they venture out into the world and do well it’s hard not to be proud of them.

Also the minute you take your eyes off them they’ll likely do something.

We highlighted Creso more than 6 months ago as one to watch. After the initial weed frenzy played out, it settled in a tight trading range between $0.40 to $0.60 and stayed there for 5 months. Astute market pundits know this is when the smart money is accumulating stock for the next move higher.

Then winter set in and we said

It seems that ASX weed stocks have taken the cooler weather as a sign to enter hibernation as we wait for the next batch of news that might awaken them from their slumber.

When the sector cooled off you had plenty of time to sock some away (as we did) and then wait. (the hard part where the money is made. Just ask Livermore.)

Where are they now?

Spring has sprung and these stocks are on the move again, delivering healthy gains to investors across the board. Names in a hot sector where the story makes sense are likely to see price appreciation in a reasonable time-frame. This is generally how the market plays out.

One thing we’re noticing is that ASX weed stocks still don’t appear on the radar of many investors. So they’re a niche, which is great, as there is a sizable pool of investors who have yet to stumble upon this investment opportunity. Cash on the sidelines as they call it.

The re-rating is beginning, especially within the weed stocks themselves.

To be clear, Creso is NOT an Equity Guru marketing client, just a company with quality management who appear to be delivering on their promises. They’re the sort of companies we like, and we’re not shy about shouting it out.

The market is taking notice and so are we. So should you.

Our only agenda here is to identify stocks we feel are worthy of your watchlist. The rest is up to you.

It’s been a good week here in the Equity Guru office as we’ve watched Creso Pharma (ASX.CPH) release a bunch of positive news which has seen its share price punch well into blue sky.

As can be seen by the RSI above, the stock is way overbought. What does that mean? In layman’s terms, it’s due for a pullback at this stage, which would be a healthy development.

Today the stock was pushed as high as $1.64 before profit-takers swarmed in late afternoon trade. It still managed to close in the black at $1.34, which was below the days opening print of $1.42.

Editors Note: See update below as we shed some light on Wednesdays PA

It needs to build a new base before moving higher – a continued parabolic move is not in the interests of longer-term holders as many potential entrants will be hesitant to chase price up here.

CPH has released a bunch of news to the market this month, giving investors reason to believe things are actually happening back at HQ. Here’s a quick recap to save you the leg-work of tracking them down. 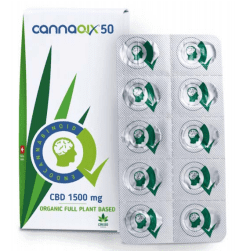 Anytime you mention the world China you can expect a few points to be added to your stock price. Bots were all over this one.

Throw a few in with the dog biscuits, they’ll love ’em!

Trudeau is hip and weed-friendly. Having purchased Nova Scotia based Minerva Medicinal Inc, Creso now has some chops in the Canadian weed space. In theory, the less tax they pay, the more dollars find their way back into the pockets of investors.

As per the PR, the alliance is intended to create a vertically-integrated cannabis operation with a global footprint spanning cultivation, IP generation, innovative product development and commercialisation.

Studying weed at uni – a no-brainer.

Is Creso shaping up as the crème de la crème?

First up, no-one has a crystal ball despite what they may tell you. Including us!

We’re not fans of setting price targets on stocks as it suggests we know something the market doesn’t – which we don’t.

Instead, it makes sense to look for ways in which CPH could disappoint the market. In our eyes, until the company begins to report revenues, we can’t see much in the way of roadblocks.

As with all names in the sector, you need to keep an eye on the cash burn. Creso is currently cashed up with no debt. A nice place to be.

It wouldn’t be a surprise to see the company raising cash with the SP at these levels. As we’ve said before, the time to raise cash, for any company, is when you’re near all-time highs rather than all-time lows. 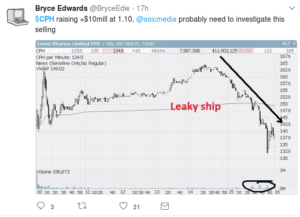 OK, we were surprised! The morning after we went to press with this article, The Australian Financial Review (afr.com) Steet Talk column reported Creso was about to tap the market with a $15 million CR, priced at $1.10 per share, representing an 18% discount to Wednesdays closing price of $1.34.

While this makes sense, so does the price action of yesterday afternoon when it appears the whisper got around. We thought the 30 cent fall in late trading didn’t make a lot of sense. Until now.

When CPH begins trading again expect the SP to hit the $1.10 level in short order. It’s doubtful that ASIC, being the toothless tiger they are, will investigate who was hammering the stock for those last few hours.

While the stock is still in its embryonic stage, it’s being priced on potential as investors awake to the use of medicinal cannabis within the pharmaceutical industry in Australia.

A change of government in Australia would be something to watch as it could put a damper on the weed wave currently sweeping through Oz.