Yesterday, the Quebec government releases details of its marijuana bill. There’s a good run down over at the CBC, and I highly recommend you check it out. Tuesday’s piece got most things right, but here’s some areas where we goofed:

To tie things together to a theme I’ve been harping about, this legislation clearly shows us the culture around weed is much more conservative in La Belle Province. The government of Quebec was explicit, these regulations are as strict as possible. This means the cannabis market will be stunted until the regulations loosen up.

Here’s a quick roundup of reaction and commentary around the french media today.

In Le Devoir, they go into some detail about the potential conflict with federal regulations by stopping private growing at home. They speak with a professor at the University of Montreal who points this out: (Translation mine)

“If it’s clearly zero plants under provincial rules, and four plants under federal rules, truthfully, we find ourselves in a situation that, even if we hate it, we have to concede the federal rules would apply… …Either I’m breaking the law or I’m not.”

They also go into the fact the government is being as strict as possible but have to move forward due to the federal deadline. There’s a glimmer of hope as the Minister continues to describe the legislation as ‘evolving’.

I think the Quebec government wants a showdown with the feds so it can cave, and wash it’s hands of the issue. “See? We tried to ban home growing, the damned anglos in Ottawa made us do it.”

The Journal de Montreal jumps all in on the I-hate-weed bandwagon. In fact it’s the first three words of the column.

This one is a real clutching at pearls piece. Mostly focused on the corruption of youth and resignation at the reality those darned kids are going to smoke anyway. After complaining about the bill for a while, the columnist shifts gears and slams the government for its draconian laws and onerous restrictions.

Kind of a cake and eating it too column, but my favourite line is this breathless exclamation (Translation mine):

“CEGEPS and colleges can even build pot smoking lounges!!”

That’s Three (including the english CBC) calling out the government on the restrictiveness of it’s law.

HuffPo Quebec wants to know what the new quebec-run dispensaries will look like. They warn people not to expect a nice customer-focused shopping experience. No sommeliers or barista types here.

The government says these will be sober places where you will get to feel the appropriate amount of shame as you indulge your dirty, dirty, habit (we judge you silently).

They quote Lucie Charlebois, Minister of Public Health (Translation mine):

“Certainly it won’t be a place that’s super attractive, but it won’t be somewhere super-uncomfortable either.”

Wow. I can’t wait to book my flight to buy some not super-uncomfortable product.

Finally, Hydropothecary, (THC:X) has come out in favour of the law, continuing to cement itself as a collaborator with the Quebec government on this file. The stock is up 4.25% in the last 24 hours, and I think it will continue to be a winner. 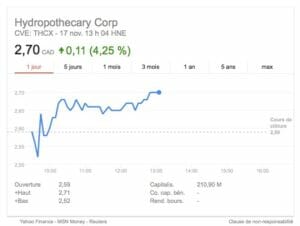 Overall the consensus seems to be, this is a crazy draconian law and will need to loosen up. I suspect the Quebec government needs to satisfy a large conservative population living in the rural areas, so will happily hand off the big-bad-enabler role to the federal government.

I also think figuring out who will have a lock on suppling the monopoly will be the key to making money in the Quebec cannabis market. I think Hydropothecary is a good bet, but I doubt they can meet all the demand. I’mma  start sniffing around for more local producers – because I can guarantee you local firms will have first shot at any contracts.

Full Disclosure: I lived in Quebec. I don’t own stock in any companies above.