Melbourne Cup day is one of the few things I miss about not being in Australia.

Last week the race that stops a nation was run and won, Rekindling the victor at odds of 16:1. For the record, I didn’t have a bet on this year (would be illegal here in Thailand!) but if you managed to turn a few dollars into a windfall then good on ya! 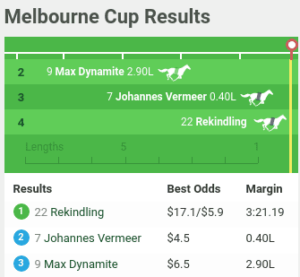 Maybe we’re in the wrong game?

Instead of the ponies, we’re here trying to help you pick the winners from the ASX weed stocks, and it looks like they’re in the back straight now, jockeying for position for the final 1600 meters.

After resting up, pot stocks have awoken in the past week and gone on a tear, with many now testing their previous highs. The process of sorting out the contenders from the pretenders is well underway.

We received an email recently asking us why. Our reply? Just a lack of selling on top of some much-awaited news releases from the companies themselves.

You had plenty of time to get set over the past few months at what will now be viewed as bargain prices.

This is a dip you should be looking to buy.

It’s the old If you liked ’em then you’re gonna love ’em now line of thought.

Simply put, this is an excellent entry point for anyone looking to gain exposure to the sector.

Here at Equity Guru we can only lead you to water – we can’t make you drink.

Why has the sector surged back to life? We need to look towards Canada, arguably the leader in this space.

Weed stocks over there have exploded in the past few weeks on the back of planned legalization of recreational marijuana in July next year. This appears to have given weed investors everywhere the munchies.

Those who purchased during the recent swoon are now sitting on an average gain of 35%.

Here’s a breakdown sorted in descending order of price appreciation over the past 5 months in the sector.

Call of the card

It’s been a year since the weed frenzy hit the ASX. Now the day traders have left, the heavy lifting is left to the serious investors.

Stocks which have failed to recoup their losses since the sector got pummeled will find the going difficult.

Here’s a rundown of our stable of weed stocks, including recent news, price charts and our current thoughts.

Form guide for the run home

Listed on 4th May at a healthy premium.. An amazing run of late, three weeks ago the stock was trading at an all-time low of $0.20 (its IPO price).

It’s up 75% today! Closed at $0.92, after announcing a distribution agreement with a major European supplier. 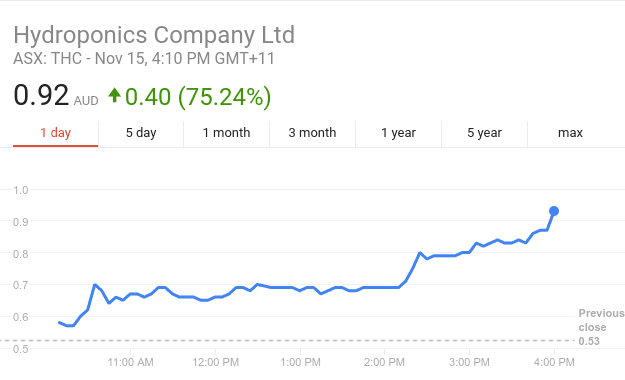 Regardless of where investors purchased, everyone is in the green with the SP at an ATH. One to watch.

Editors note: Mea cupla. As reader Brendan pointed out to us, this was a glaring omission from our list. Listing on the 4th of May this year (same date as THC.ASX), CAN was somewhat overshadowed by The Hydroponics Company, which received most of the press coverage.

CANN Group has been a star performer with a price chart to match. The IPO, priced at $0.30, lit up the boards at $0.67 on the first trade and only ever dipped as low as 50 before making a slow and steady rise. For some unknown reason, it was savaged today (down nearly 25%). The closing price of $2.53 still represents a healthy gain for anyone who invested over the past few months. 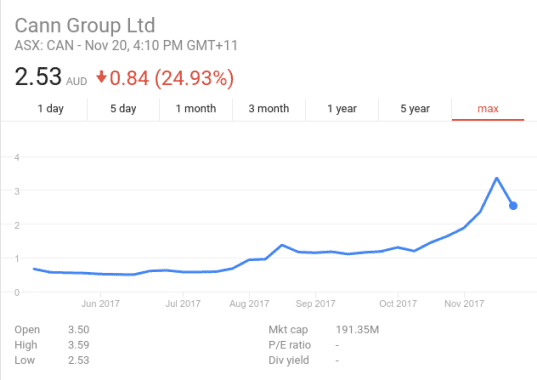 The company gained bragging rights by being issued Australia’s first Medicinal Cannabis Cultivation Licence in March 2017, allowing them to produce Australian grown material that can be prescribed for patient use.

On 28th August, 2017, they announced the completion of their first harvest and production at a facility in Victoria.

Good things happening here. I’m talking my book but I’m not the only one who thinks this company will continue to surprise.

Financial wunderkid Assad Tannous, who was lucky enough to pick up cheap paper1 in one of the seed rounds tweeted his 11-bagger this morning. Good on him!

A strong contender that’s expected to do well on the back of its ties to Canadian listed Canopy Growth Corp (WEED.TSX).

Stunned the market recently when they announced they would supply 15,000kg a month of cannabidiol cosmetic products to Korean cosmetics maker Varm Cosmo. The deal will, according to Reuters, deliver a minimum of $40 million in total annual revenue to MGC.

There’s the box trifecta right there, as we head towards the home straight.

We still can’t muster any enthusiasm for this name despite recent price action. Is it a miner or a weedco?

They’re moving into the hemp (edibles) space. We were going to check out their website but decided against it (see graphic below)

Hard to invest in this stock with any confidence.

If you’re buying into this name you need to believe their product pipeline (which, according to their website, currently includes 4 programs focused on the treatment of serious acne, plaque psoriasis and atopic dermatitis) will deliver.

We’re sceptical. We didn’t like it much when we first covered it, and not much has changed.

Financial advisers Argonaut have it rated as a spec buy with a valuation of $0.095.

A recent news release stated SCU has parted ways with the Cannabis King Nevil Schoenmakers. If you recall, this much-hyped agreement was one of the drivers which pushed the stock briefly above a buck at the height of the weed frenzy.

The company is still intending to expand into medicinal cannabis. However as stated in the announcement of 8 August 2017, there can be no guarantee that this initiative will be successful.

We told you to stay away when we witnessed the classic pump and dump. Has not recovered and looks unlikely to at this stage.

Rest of the field

We took a deeper dive not long ago. The stock was trading in the low eighties and had held up better than most during the downturn.

In summary, we concluded:

Unfortunately for stockholders, it has fallen 20% since then. Why?

80 million shares came out of escrow back in July. So there’s that.

Something we missed the first time around was the ASX’s query to MDC based on the quarterly report they lodged on 28 April 2017. In essence, the ASX was concerned cash burn would mean they didn’t have enough money to continue BAU operations. Want to know more? Read about it here.

This may have spooked some investors who have taken the opportunity to sell into strength.

Where does that leave the holders of ESE, MMJ, RGI and ZLD?

Investors are likely sitting on gains but will feel as if they have missed the recent price spike.

The difficult decision now is whether to switch horses mid-race.

2. Trifecta: A wager in which the player selects the first three horses in a race in order. A box trifecta covers all possible permutations so order becomes irrelevant. To box 4 horses would cost 4P3=24 so $24 for a $1 bet.