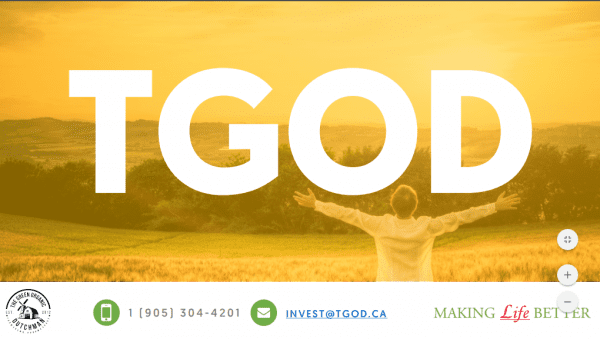 Saw an email circulating from the suits at the soon-to-be public, widely held ‘weed for the little guy’ play Green Organic Dutchman (TGOD) on the weekend, and what they’ve achieved before they’ve even gone public is… extreme.

Having brought in 2300 investors on their first round of financing back at the end of last year, there were plenty of folks who figured their was not a lot of dry powder left for them to go for another round.

But another round is exactly what they’ve done, and the result is another 1300 small and medium sized investors are into the thing, in this pre-listing $30 million round.

That’s an investor base of 3600 people BEFORE THE THING EVEN OPENS, many of them with a six-month hold on their stock and full warrants.

This is not normal.

The TGOD crew have set out to do things VERY differently, and they’re doubling down now in that this raise is being made through the offering memorandum. What does that mean to you, small investor friend?

It means you don’t need to be accredited to take part.

THIS IS NOT NORMAL.

TGOD’s execs have designed this play, from the ground up, to be one that every small investor can take part in, even though it’s the same amount of work to process a $5k sub as it is a $500k sub from an institutional investor.

The TGOD team run a war room around the clock that just processes subs from little guys, and has been doing so for some time now. Other firms are happy to do less work, and process one $500k buy rather than a hundred $5k buys, but TGOD boss Rob Anderson is refusing to do it easy, because he believes that having a wide shareholder base will give him the protection he needs to actually engage in his business plan without worrying that some wealthy toe rag decides on a given Tuesday to dump a bunch of stock to take part in some other sweet deal.

It’s a smart move. And it’s one that others are noticing. I’m asked about it constantly by companies moving toward a listing, and believe what the Anderson crowd is doing is notable and innovative.

Let’s be clear – Anderson doesn’t need to do this. The financing has been effectively filled. In fact, it’s been upped from the initial $30 million to $36 million because of demand, but Anderson is insisting he’ll leave bigger money on the table if it means he can bring in more individual investors and give the little guys a chance they don’t normally get.

Usually, to take part in a deal like this, you’d need to be an accredited investor, which means you’d have to have $1 million in liquid assets or earn $200k+ for the last two years or be friends with someone inside or… BUT NOT THIS TIME.

They want 300 more investors by Friday. If you’re interested in talking to them, email dbrody@tgod.ca and ask him about next steps. Tell him you came From Equity.Guru and he’ll look after you.