DOJA Cannabis (DOJA.C) has done everything right since hitting the public markets in August, much to the surprise of everyone but the people behind DOJA.

It hasn’t been easy to earn respect. I’ve heard CEO and co-founder Trent Kitsch dismissed as Captain Underpants, Richie Rich-Kid, Harry Pott-head, Kid Kelowna, and Pinot Egregious (credit where it’s due on that last one, that’s some fine winery punnery), but Kitsch can stand tall and brush off the haters because he’s put runs on the board.

DOJA was dismissed as an also-ran by a lot of folks over the last few months, both on the investing side and by the competition. When I’ve raised their prospects with big players, I’ve seen eyes roll and shoulders shrug, I’ve heard them brushed off as kids and dreamers, but the company has hit every mark it’s set since it came on our radar.

They said they’d get their grow license a few months back, were dismissed by many who said “that can take years”, and soon had said license. They said they’d started growing and planned to harvest by, like, now, and folks said, “Good luck, it takes longer than you think” – yet they’re now harvesting. They said they were building a cannabis education lounge in downtown Kelowna and they did. 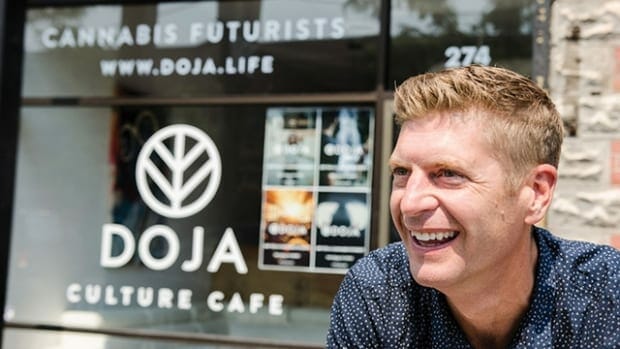 Now, they’re calling in the feds for their final inspection. They’re ready for the next step.

If that next step comes reasonably soon, their current $52 million market cap will be long gone because not only has the market not priced a full license into the stock just yet, it’s barely priced what they’ve achieved to this point into the share price. 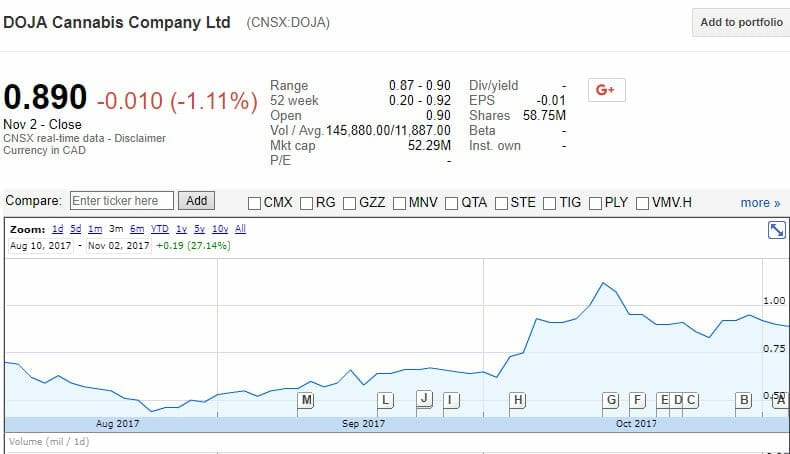 DOJA came to market on the back of a sector downturn, so a $0.70 open sunk below $0.50 in quick time, leading to a chorus of dismissal from the usual crowd. But since then, fueled by insider buying by Kitsch and his clan as much as anything, the company stock had nearly tripled.

Even with a fall-off over the last few weeks, the stock is still up a double from it’s $0.44 low, with a strong likelihood of news looming.

News such as this:

Doja is also pleased to report that it has closed its previously announced acquisition of a 22,580-square-foot commercial building in Kelowna, B.C. Doja plans to move forward with building out a state-of-the-art extraction facility and apply for an oil production licence at the future lab. The company plans to build out the future lab in a phased approach; once fully completed, the facility is projected to produce approximately 4,500 kilograms per year, pushing total corporate production capacity to over 5,000 kilograms per year, representing a 760-per-cent increase in production over the existing production facility.

Call him the Ganja Ginger all you want, roll your yes and refer to him as the Prince of the Package if it helps you sleep at night, but Kitsch and his crew are making it happen.

FULL DISCLOSURE: DOJA is an Equity.Guru marketing client and the author owns stock in the company