On October 24, 2017 First Cobalt (FCC.V) announced that prospecting and structural mapping will begin on the land package soon to be consolidated by FCC, Cobalt One (CO1.ASX) and CobalTech Mining (CSK.V).

Although shareholders have not formally ratified the deal, FCC has been given permission by CO1 and CSK to march onto their land and get cracking with the expanded exploration program.

Cobalt is a critical ingredient in lithium-ion batteries. In the last 25 years – rechargeable battery cobalt consumption has increased 5,000%.

Because of surging global demand, markets are excited about cobalt and FCC in particular (the stock price is up about 700% in the last 2 years). 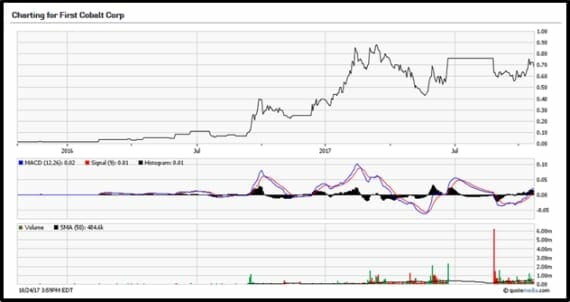 The total value of the 3-company deal is about $140 million on a fully diluted in-the-money basis.  Cobalt One will become a wholly-owned subsidiary of First Cobalt.

This deal consolidates large land packages in the Ontario Cobalt camp into a single landholder with over 10,000 hectares. 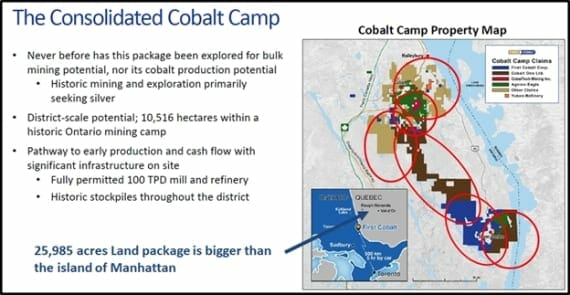 The results of the recently announced mapping program will be used to plan a winter drill program.

According to the Press Release:

“As the merger of First Cobalt, Cobalt One and CobalTech nears completion, the three companies are cooperating to give the consolidated company an early start on a land position that will encompass 10,000 hectares and 50 past producing cobalt and silver mines,” stated Trent Mell, FCC President & CEO. “This exploration program will advance our understanding of the diverse geologic settings throughout the Camp and position us for an active winter season.” 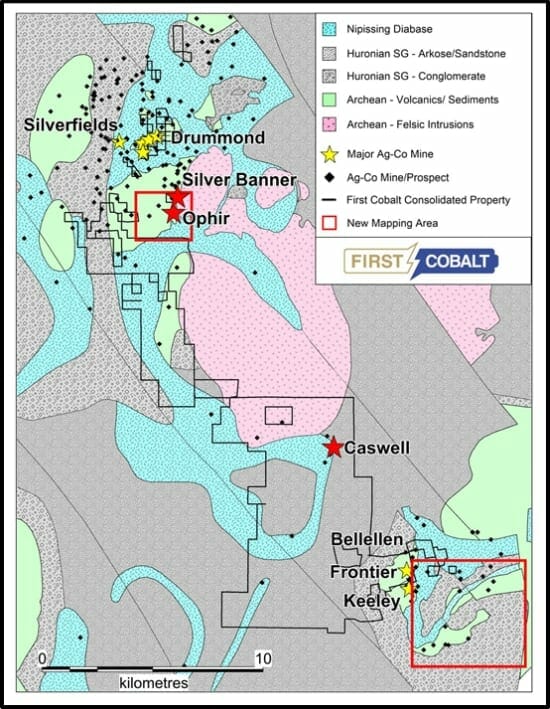 FCC’s management team includes resource legend Paul Matysek who served as CEO of Potash One, which was acquired by K+S Ag for $434 million in 2011. He was the founder and CEO of Energy Metals Corporation, a uranium company that grew in market cap’ from $10 million to $1.8 billion when sold in 2007.

“Another area of interest includes the Caswell mine where historic production is reported to contain silver-cobalt-nickel-copper-Co-Ni-Cu minerals but with only a few assays recorded. The geologic setting at the Caswell mine is similar to many of the large past-producing mines in the Cobalt Camp.”

The mapping program will attempt to characterize regional structures associated with copper-silver mineralization, focusing on (1) the New Lake area, including the Ophir mine and Silver Banner mine, and (2) the Maiden Lake area to the east of Keeley, Frontier, Haileybury and Bellellen mines. 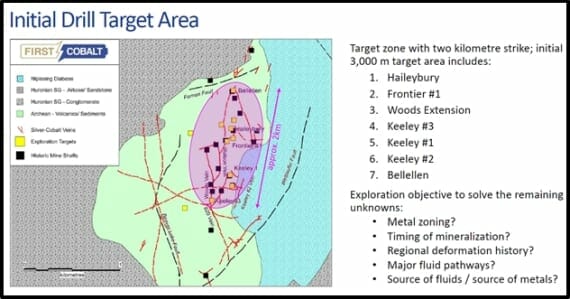 Airborne magnetic data previously collected has been modeled and interpreted for the Maiden Lake area. These interpretations are being evaluated as part of this field mapping program. Airborne magnetic data for the New Lake area is currently being modeled and will be integrated with the structural mapping interpretations following the field work. Structural interpretation work will also continue through December by relogging available historic drill holes and recent drill holes at Keeley-Frontier.

But they couldn’t wait to start the exploration program.