On October 1, 2017, a 64-year-old gambler used a hammer to smash a hole in a 32nd floor window at the Mandalay Bay Resort hotel in Las Vegas. He then opened fire on a crowd of music fans at an outdoor concert below, killing 59 people and injuring more than 500. 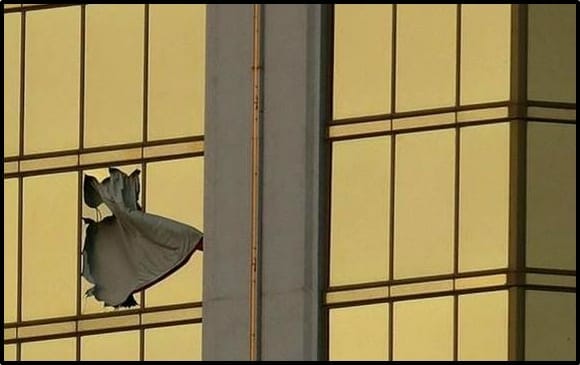 The previous day, with zero subterfuge, the shooter was able to stroll though the lobby of the Mandalay Hotel with an arsenal of 23 scoped guns – calibers ranging from .223 to .308 – including an AK-47 type rifle, with a sniper stand.

Since then the hotel industry has been wringing its hands in dismay, claiming that it’s been broadsided by the tragedy.

“The firing of weapons and disregard of human life, presents a major threat to global security…Unfortunately, hotels along with restaurants, theme parks, cruise ships, tourist attractions and public transportation are classified as high risk and soft targets.

When there are no incidents over a period of time a certain degree of complacency sets in. Complacency itself is an actual risk for the business, for guests and staff. The recovery costs after a security incident, including the attention of the media, are often much higher than the investment in security and risk management.”

In reality, it would have been relatively easy to identify weapons at the Mandalay because every hotel guest must pass through the lobby to gain access to their room.

Patriot One (PAT.V) has developed “Cognitive Microwave Radar” that detects concealed weapons from a compact piece of hardware that can be embedded discreetly in wall cavities.

Patriot One’s hardware “can be installed in hallways and doorways to covertly identify weapons and to alert security of an active threat entering the premises.” 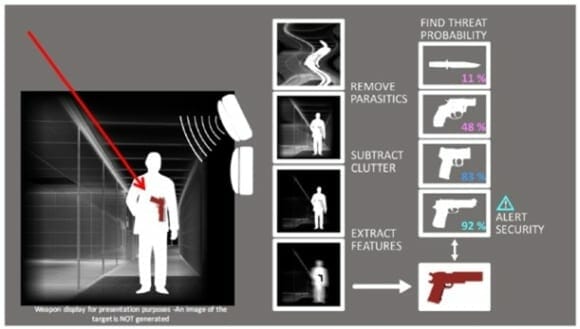 The Company’s motto Deter, Detect and Defend is based on the belief that its technology will diminish the rise of active shooters across the globe.

As well as hotels, universities, banks and schools are natural locations for discreet weapons-detection technology. The PAT technology has the ability to scan in tight or wide spaces. 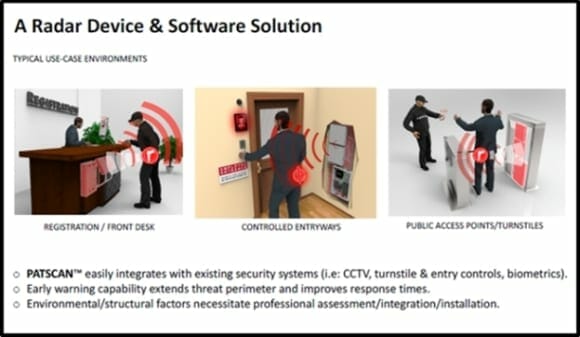 “Our system, which relies on machine learning algorithms, has graduated from the lab and is about to enter the arena of commercial distribution,” stated Patriot One CTO Dinesh Kandanchatha. “Our strategy involves deployment through the remainder of the year to meet our backlog of commitments, and to immerse our engineering teams into an in-depth analysis of real-world threat scenarios.”

Basically, the PAT software contains a data-base of every weapon ever manufactured – and it creates an alert when it discovers a weapon.

Phase 2 is identifying and tracking the weaponized human.  Which requires commercial-grade CCTV resolution.

To that end, Patriot One has just integrated its technology with March Networks.

According to the September 26, 2017 Press Release:

According to a Fox News Story, “security experts” are still dithering in their response to the Las Vegas shooting.

“The bottom line is, they couldn’t prevent it,” said Fred Del Marva, a hospitality security expert who works as a legal security consultant for hotels, bars and casinos in Las Vegas. “This is nothing but a random act of violence that couldn’t have been prevented. I’ve been wracking my brain, and I just can’t see it”.

That’s like staring at a bowl of pasta and musing on a cure for your hunger.

We suspect the hotel industry’s slow adoption of weapons detection technology is connected with its dedication to the US Second Amendment which declares that “The right of the people to keep and bear Arms, shall not be infringed.”

Of course not.  You need your guns.  Wouldn’t dream of taking them away.

But, on October 1, 2017, in Las Vegas, it might have been useful to know who was carrying weapons and how many.

Patriot One’s stock price has doubled in the last two weeks.  It is currently trading at $1.48 with a market cap of $100 million.

Full Disclosure.  Patriot One is an Equity Guru marketing client.  We think the company has developed useful technology.