A while back I wrote about a little company called (among other things) Reliq Health Technologies (RHT.V). The company started as one thing (mobile security), shifted to another (tracking and networking health care equipment) before eventually evolving into a telemedicine tech play.

In doing that, the company brought in a new CEO with ample health tech experience, Dr. Lisa Crossley, and she laid out a path going forward. And the market turned away.

Whether that happened because she’s a woman, or the company had just had too many evolutions, or nobody believed the plan – I can’t tell you. But I can tell you I listened to what she laid out and was sold.

Here’s a podcast we ran at the time, wherein it was revealed she had a plan for every eventuality – even a zombie apocalypse.

And since then, RHT has been on the list of companies that online trolls who spend way too much time trying to get my gander on social media refer to as ‘one of my failures’.

Or at least they did until recently, because the word is out on RHT and the share price is moving hard in a positive direction. 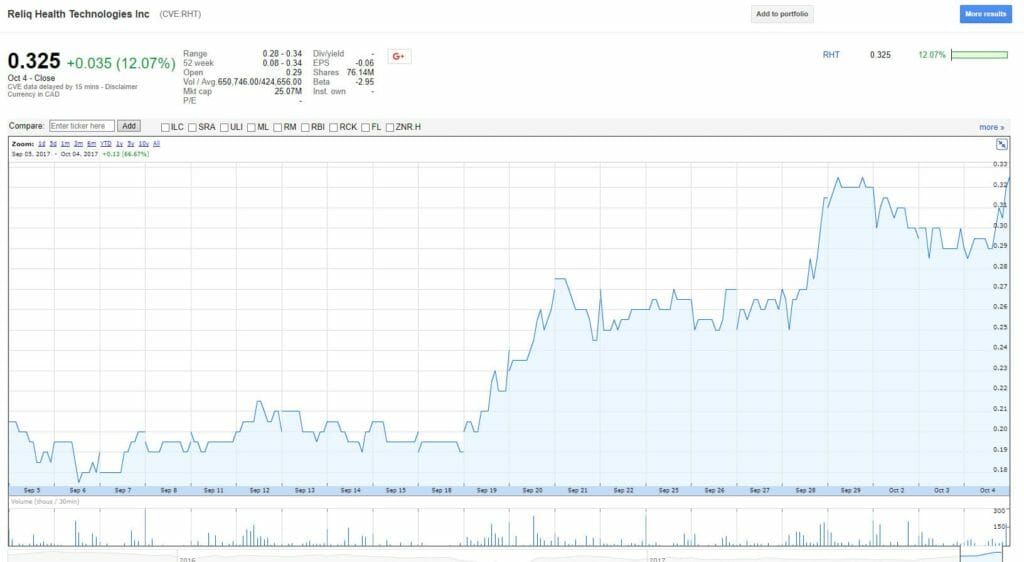 Reliq has four pilots going with medium to large healthcare providers, with the biggest being the British universal health provider, the National Heath Service (NHS).

Pilots are fine. Companies do pilots. The proof of a future has always been, can you move from a pilot to a full program?

Well, Reliq has. They’ve now got 1000 patients into their system from two customers, and expect somewhere between 2000 and 2500 to be added next month.

The plan is to move 40,000+ patients into the system at that rate, which would bring $26 million at full deployment. And that’s with just the customers using the system now. If the NHS were to take it on, though admittedly that would be a far longer process to complete, the dollar value would be insane.

Currently RHT sits at a market cap of $25 million, which is fair but will look pretty sweet if another of those pilots moves to customer ready. Several white papers are being prepared about the pilot programs currently, which the company expects to use to bring in more deals if they’re as glowing as early reports suggest.

To me, this is vindication. If you’d purchased RHT when we were talking about it, you’d have paid about $0.12 per share for it. You could still have paid that much in July. But the story is out now and the stock has run to $0.325 and is yet to slow its roll.

The junior markets are not set up to give CEO’s a year plus to prove themselves. A financing happens, and folks want their money out when the four month hold clears on their stock, and if your CEO hasn’t performed heroics (or manipulation) in that time, the deal is a failure.

This one has been a failure for years to many, but is a raging success to those who held the line and are now sitting on a triple.

And on top of that, those who invested in the company’s June private placement have agreed to extend their hold to December to give Dr Crossley more time to work her magic before she faces selling pressure.

We’re proud to have been there early on backing the boss, and we’re proud she’s done exactly what she promised, and we’re fine with having endured some slings and arrows along the way to vindication.