The average human body contains 2.5 grams of zinc, according to scientists, and there are 323.1 million people in the USA. So, by my math, if everyone just lined up to be exterminated and refined down to their zinc core without protest, we’d recover 1.78m lbs of zinc, worth US$2.67 million at today’s prices.

Alternately, we could dig it out of the ground. Boring, but much less clean up.

And, as it turns out, probably a lot more profitable. 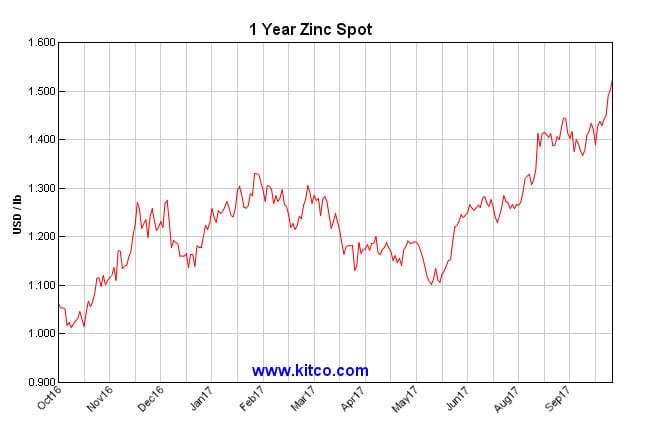 Zinc is on a hot streak right now, which has been reflected in the stock prices of companies like Zinc One (Z.V), which is a marketing client of ours, up from $0.44 a few weeks ago to touching $0.50 today.

Zinc prices haven’t been this high in the last five years; in fact they haven’t been close. The commodity ran to a higher than $3000 per tonne price for the first time in a decade yesterday.

It’s been a while. In 2012 you were paying $0.80 for a pound of the stuff, and in early 2016 it was down to around $0.65. No surprise then that some of the major players in the zinc space found other things to do with their time. Bocce, knitting, care and maintenance, divestment..

Zinc bugs have been yelling for some time that there was already a looming shortage of the stuff, but the low spot price left the market not caring much about such things. If it was zincy, it was stinky.

But that sort of imbalance never lasts, and with less mines putting zinc out, and more things needing the stuff in our every day life, we’re now in that place that cobalt has been in recently, and lithium was in before that, where the market suddenly wakes up one morning and puts zinc production targets on ‘blast.’ Today, the zinc price is over $1.50 per lb, up more than double from early 2016.

Last week I talked to a CEO from Blue Moon Zinc (MOON.V), which isn’t a client company but was pointed to us by a shareholder as being a story worth hearing about. So, okay Patrick McGrath – entertain and inform me.

“We have a mine project in California,” he says.

Oh, Christ on a bike, I think.

California isn’t usually where mining projects go to become mines proper. It’s a progressive state, fond of its nature and wildlife and agriculture and culture, which is all stuff you don’t traditionally relate to mining.

Nevada? Sure. You could basically walk into Nevada, toss a fifty on the table, and walk away with your very own mountain to crack open. I’m pretty sure they give complimentary drills at the Tropicana. If you wanted to turn the Bellagio fountains into a leach pool, I know a guy.

McGrath doesn’t share my cynicism, for three reasons. One, his property has been a producer before. Two, the area it’s situated in REALLY wants jobs. And three, the guy who steered the last Californian mine project that got all its permits and duly went into production is with him on this one.

This is an interesting twist because most guys I know in the mining business think about permitting in California as much as they do Rhode Island. Idaho, Texas, Arizona, Quebec, these places like a good mine. But there are other places where the process is a much longer one. BC, as an example. You can find good resources in BC in plentiful numbers, but because it takes a lot of work to move them through the permitting process, folks tend not to, unless there’s so much shiny in the ground that you have to wear sunglasses to walk the plot.

McGrath says he’s very happy with the property he has in California, because it has ore that’s sizable and can be got at. And the only reason he got his hands on it, he says, is because folks don’t think it can be moved forward. Because California.

If he can see to that side of things, he’s got a real opportunity going forward.

“Look, when I first saw the property I had the same reaction as everyone – California? Pass. But when you look at the hard numbers, it’s worth that effort,” says McGrath.

“The asset was a past producer, during a time of war and national need – a modest 50 thousand tonnes – they went in quick and dirty to get as much as they could as quickly as possible, mostly cleaning up at surface.”

From 1943-1945, the resource was mined by Hecla Mining Company, whose efforts produced 55,656 tons of 12.3% zinc. The mine lay dormant until the early 1980s, when Imperial Metals completed approximately 33,000 feet of diamond drilling. Thereafter, Westmin Resources, now Boliden, one of Europe’s largest zinc producers, undertook about 57,000 feet of diamond drilling, calculated a mineral resource and commenced engineering, metallurgical, hydrological and environment baseline studies. In addition, Westmin obtained a permit and approval of a reclamation plan from Mariposa County for a shaft and certain underground development. By 1991, the resource was in new hands: being explored by Barrick (Lac), who completed approximately 20,000 feet of drilling. Consequently, Blue Moon, USA stands on the shoulders of well-established and well-qualified operators, who have done a lot of the development work.

“These guys got distracted by a European zinc project, exited North America, sold their assets, and moved on,” says McGrath. “A few decades later, we inherited a bunch of data and materials from them. I was out at the property last week and the core shacks, and the cores, are still intact.”

Blue Moon came together by virtue of an asset disposal from other companies. This happens sometimes – you’ve got two or three properties kicking around, you move forward on one in a hot sector, and let the others move on. For McGrath, he feels like he lucked out.

The key to his confidence in moving this property forward comes in Lutz Klingmann, a technical advisor to Blue Moon. Klingmann, as director/CEO of Golden Queen Mining (GQM.T) developed the gold and silver heap leach project in Southern California known as Soledad Mountain.

To be clear, a heap leach project is a tougher thing to permit than an underground shaft, especially when you’re in Southern California, just outside Los Angeles. But Klingmann made it happen. Klingmann also moved the project forward and brought in $100 million in financing. Respect.

Now Klingmann is standing on the Blue Moon property and nodding, believing the challenge won’t be any harder, and that the opportunity may be comparable.

“He got Soledad going with cyanide near LA,” says McGrath. “A lot of people were surprised, but California isn’t a ‘no mining’ state, it’s a responsible mining state, and we believe we’re in a great position to surprise people again. Lutz had retired, but likes the property enough that he’s come back to work.”

“We view it as, when Boliden exited North America in the early 90’s, California was tougher than most states in America to get a permit, but we think now it’s an even playing field. If you go about it right, you can get a permit pretty much everywhere. You just check off the boxes and give them no reason to say no.”

“Our key advantage is, the local county can elect to become the lead agency for permitting, environmental, etc. And Mariposa County has 18,000 people who could use the economic push a mine would bring the county. If you know your California gold rush history, this area was so actively involved in mining, you see the streets are literally named after mining history – Bullion Street runs right through the center of town. There’s more ranching now, but mining has a deep root there, a lot of people have family in the mines. We’ve met with the county several times and they’re open to new businesses coming in and mining responsibly. Their view is most of the jobs there currently are lower paying, and mining brings a higher priced wage. 150 high paying jobs in a county of 18,000 people is a big deal.”

Making the effort worthwhile is the pile of materials the Blue Moon team have to work with, and what they show.

“The previous producers and explorers left very good records of everything, environmental reports, baselines. We’ve got a leg up on what we’re trying to accomplish here to take from what they have to feasibility, permits, production. As far as short term catalysts, we want to release an updated NI 43-101 resource estimate (NOTE: This happened, like, now – see the note at the bottom of this article). The last one was done during a $0.78 per lb zinc price; we want one based on $1.30, which is still lower than the current rate but we’d rather stay conservative.”

As far as what’s in the ground, while zinc is the primary output, copper, gold, and silver – “pretty good silver,” according to McGrath – are also present in decent numbers.

Blue Moon has about half a million in cash, raised earlier this year, to operate with, and that’s enough for now, says the boss.

“Doing the 43-101 and a PEA, the burn is very low, we’re keeping everything skinny but, when we come out with the PEA, we’ll raise capital on the back of that sometime in early 2018, then kickstart a drill program. What we’re looking for is resource expansion and an infill program. Infills to move numbers from inferred to indicated. Now, it’s about half and half, so we’re upgrading that portion.”

“We’re looking to follow the Arizona Mining (AZ.T) model; they de-risked it right through drilling, metallurgical, PEA, and advancing permitting. They went from trading pennies on the dollar to graduating to the big board. If we can show the market this has real economics behind it and a path to production, the market will wake up.”

The market is already yawning and blinking it’s eyes at the sun, hitting the snooze button and thinking about bacon. MOON.V stock has run from $0.035 at the beginning of September to as much as $0.10 in the last few days.

UPDATE: As we were writing this piece, Blue Moon updated their resource estimate.

Blue Moon Zinc Corp. is pleased to announce a Mineral Resource update for its 100% owned Blue Moon zinc deposit. The deposit now comprises 3.7 million tons in the Indicated Mineral Resource category grading 8.3% zinc equivalent (“ZnEq”) and 4.1 million tons of Inferred Mineral Resources grading 7.8% ZnEq, both at a 4.0% ZnEq cut-off grade. [..] There is a high likelihood the deposit continues at depth as the mineralized zones are near vertical and the deepest holes in the resource end in mineralization. Several historical exploration holes drilled below the resource intersected significant zinc grades. Blue sky potential also exists along strike to find another “Blue Moon” style deposit as polymetallic massive sulphide deposits are often found in pods or clusters.

We’ll be keeping this on the radar as they move forward.