First Cobalt (FCC.V) just kicked it up a notch

Three months ago, First Cobalt (FCC.V) made this statement about its Greater Cobalt Project in Ontario, Canada:

“[We] believe that a rebirth of this historic mining district will occur through the application of modern geoscience, a better understanding of disseminated cobalt mineralization and ultimately, bulk mining methods.”

At that time, there were three legitimate reasons to purchase FCC stock.

Now there’s a forth reason: geology.

Background: July 2017 FCC began a field mapping program and reconnaissance of new areas.  The geologists were attempting to identify and prioritize areas for future exploration and drilling.

On September 28, 2017 FCC reported high grade cobalt assays from the muck piles of the past producing Bellellen Mine.

The results brought in 857,000 shares of buying – and got the stock jumping: 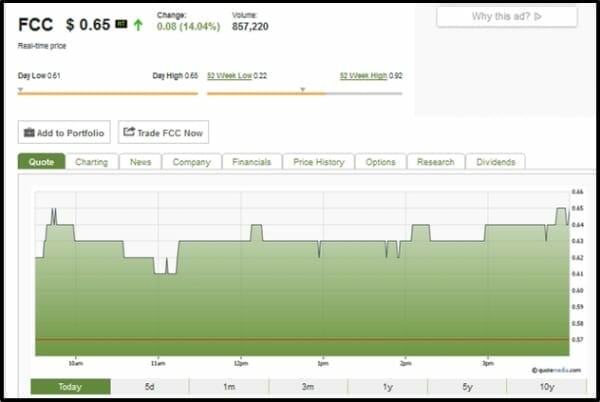 “Bellellen contains a different style of mineralization compared to Keeley-Frontier that at first looked uninteresting but in fact contains high cobalt grades,” stated Dr. Frank Santaguida, V.P of Exploration. “This suggests that a more complex structural-hydrothermal setting may exist here than was previously considered.”

First Cobalt CEO Trent Mell has stated that the former Bellellen mine is “now a high priority target” that will need a good drill plan and possibly “more initial holes” compared to the ongoing drill program at the Keeley and Frontier mines.

The samples of vein material appear similar to those seen at other cobalt-rich areas, with high levels of nickel and silver.

The muck pile samples are geologically complicated.  One sample contains high values of copper.  Another sample has “fracture-controlled mineralization. Yet another was “breccia-textured.”

FCC stated that there is a “complex relationship between veining, fracturing and metal concentration.” 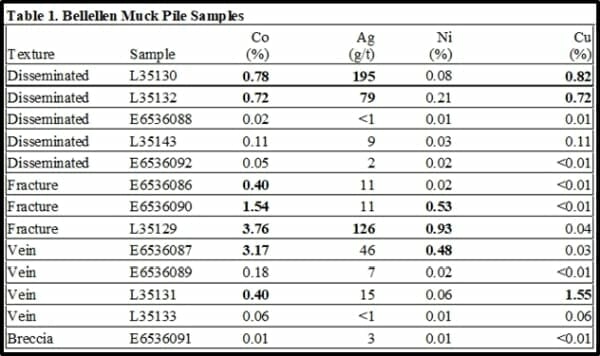 The Bellellen discovery is part of a 7,000 metre drilling program that is testing vein systems over a two-kilometre strike length including past-producing mines: Keeley, Frontier, Haileybury as well as Bellellen.

Each of the systems will be tested with 6 to 10 holes, 50 to 150 meters in depth. The geologists expect to put in a few deeper holes, and at some drill stations. More holes will be punched to determine dip orientations. A 3D compilation of the mine workings is assisting with the drill program planning.

Assays are pending for the completed holes. FCC has struggled to find qualified core cutters, which has delayed the submission of samples to the lab.

Currently, about 4000 meters of drilling has been completed.

A muck-pile of high-grade cobalt is not the only sexy subplot coming out of FCC.

On September 18, 2017, FCC announced that is not going forward with its exploration properties in the Democratic Republic of the Congo DRC.

We believe that is a good decision, strategically, corporately and ethically.

Could FCC deal keep children out of their DRC mine?  Probably.  Would it be a distraction?  Definitely.

“The Canadian Cobalt Camp is emerging as one of the most prospective targets for cobalt exploration,” explained Mell. “The DRC remains very appealing geologically but the investment climate has deteriorated since the strategic alliance was announced and we have significantly expanded our footprint in Canada.”

But that’s not all.

The total transaction value is about $140 million on a fully diluted in-the-money basis.  Cobalt One will become a wholly-owned subsidiary of First Cobalt.

These deals consolidate the largest land packages in the Ontario Cobalt camp into a single landholder with over 10,000 hectares.  The newly merged company will be the biggest cobalt explorer on the planet.