Mining guys are an odd lot. You’ll find them down at the Fairmont Pacific Rim most nights (if they found something in the ground) or at the Butcher and Bullock (if they’re still looking), propping up the bar, letting their Winners-bought business shirts strain at the belt, talking about how the neighbours are bullshit and they don’t know what they’re doing and “You can almost smell the ore in the ground!” QMC quantum minerals can smell it too.

One thing they do not do well is tell their stories outside of the bar. There’s a few reasons for that.

One of our clients is a company called QMC Quantum Minerals (QMC.V). Right from the outset, we’re in marketing hell with this company, because the ticker is in the name and so is the word ‘quantum’ which can be seen in such companies as First Quantum Minerals, Quantum Corp, Canadian Quantum Energy, Quantum Materials, Quantum Solar Power, Leumei Quantum.. and that’s just the first six listed on Google Finance. Further down the list, where nobody can find it, is QMC Quantum Minerals, which has a name about as marketable as legendary soccer players like Fabian Assman, Mario Turdo, Kaka, Andre Muff, and Ralf Minge.

For the most part, that’s meant our job has been easy. Just don’t write about them until there’s something to write about.

But sometimes a company with no news IS news. 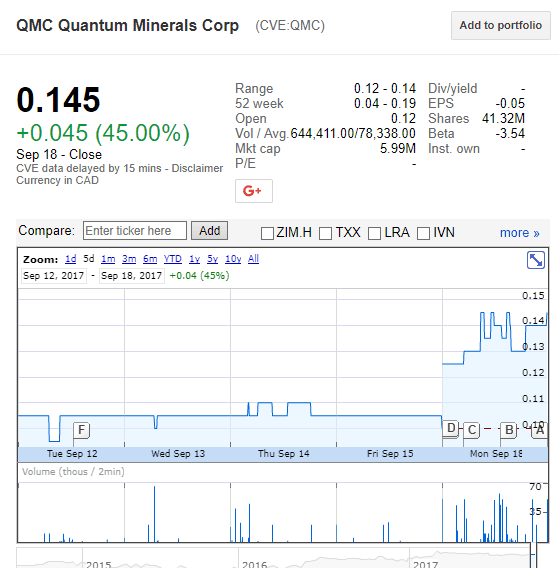 This was a lot of buying for a stock that’s been dormant, if not actually asleep. With the news being slow and the markets focused on Bitcoin and weed, there’s been no reason to buy QMC in large numbers, let alone quickly enough that you might actually raise the price of the stock in doing so by nearly half.

Last week I met with one of the guys behind QMC and asked him what was going on.

“But we’re working it. We’re deep into the brush.”

I asked to clarify what deep into the brush would mean and was told, “I mean that literally. We’re covering a lot of ground.”

QMC has a property that, as we’ve mentioned before, is spotted with spodumene, which is the kind of lithium you like to have. It generally comes in thick crystals, sometimes the size of logs, sometimes the size of trucks, if you’re lucky. It’s the kind of lithium that you don’t need gigantic land lakes for, and the high purity lithium is in demand for rechargeable batteries, which makes it great for North American processing needs.

“The crystals are often of enormous size. In the Etta Mine, where they are best exposed both in the open cut and tunnel, they frequently attain a diameter of 3 to 4 feet and a length of 30 feet. The largest “log” so far found was 42 feet long and 5 feet 4 inches in maximum diameter. This one log alone would yield 90 tons of spodumene.”

Although it remains an important source of lithium, today most of the world’s lithium is produced from subsurface brines in Chile, Argentina, and China. These sources of lithium have lower production costs and are suitable for most uses. However, when lithium of highest purity is needed, spodumene is the source that is used.

QMC has been very quiet about what it’s doing. In fact, it’s website is down as I write this.

Some investors will look at that, and the gimpy name, and the lack of market activity as a bad sign. They’ll steer clear and prefer to chase that which they know is en fuego.

But today’s action on QMC, and the lack of action for days prior, will tell you something about what’s going on under the surface. When, presumably, one investor decided there was a reason to hook in to this thing and buy 700k shares today, it flew. That’s because not a lot of holders are happily selling, without receiving a premium.

But someone charged in anyway, taking a big position in a single day, even though it drove up their purchase price. This tells me something is cooking.

Sure, maybe it’s a market maker. And yeah, maybe someone just accidentally bought at the market with an extra zero in the quantity field.

But we’ve seen this sort of thing before, specifically in Frank Giustra deals, where a stock nobody is watching suddenly marches as folks in the know get the subtle nod that something is coming and take a wager.

To be clear: I don’t know if anything is coming at QMC, at all. But I take them at their word that they’re not playing golf, and that they’re working up to releasing news that will be significant. And I trust that, at the current market cap, anyone with the slightest lithium whiff in the area will see this as a cheap buy in. And the word spodumene is not an unimportant one.

Am I ready to play Zardulu the Seer of All, and plunge Chris Jr’s college fun into QMC on this whim? Nope.

But I think this is the time to get studied up on the thing, and to free up some doughbucks for when the time becomes clearer. Others will gamble. I’ll make educated guesses. And my guess is one should check QMC every morning for the next few weeks, because if today’s move carries on, we’ll want to get very liquid very fast.

The initial work program is designed to strip the overburden off the dike thereby exposing it completely along strike. Subsequently, the company will initiate a program of channel sampling across the dike, at intervals along the entire strike length of the dike to extend the known mineralized zone and confirm previous grab sampling, trenching and drilling results.

Now it gets interesting.

Between 1953-1954, the Lithium Corporation of Canada Limited drilled 25 holes into the Irgon Dike and reported a historical resource estimate of 1.2 million tons grading 1.51% Li2O over a strike length of 365 meters and to a depth of 213 meters (Northern Miner, Vol. 41, no.19, Aug. 4, 1955, p.3). This historical resource is documented in a 1956 Assessment Report by Bruce Ballantyne for the Lithium Corporation of Canada Ltd. (Manitoba Assessment Report No. 94932). This historical estimate is believed to be based on reasonable assumptions and the company/QP has no reason to contest the document’s relevance and reliability. A detailed drill program will be required to update this historical resource to current NI 43-101 standards.

NOTE: Historical data is a guide, not a map. Things can change over decades as water and wind and random passers by have an effect on the surroundings. Until there’s an NI 43-101 here, you’re investing in hope and playing percentages and rolling a dice.

But the company is looking to clear the picture for you, and that’s good.

FULL DISCLOSURE: QMC Quantum Minerals is an Equity.Guru marketing client. We own some. Still, go easy and do your due diligence.