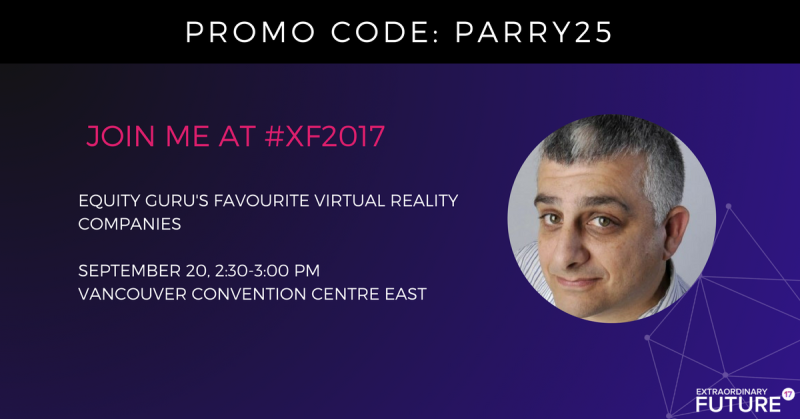 Late 2017 has been cryptocurrency time, with weed making a comeback.

That’s my take, and why I asked the good folks at Cambridge House to run a panel at their Vancouver Extraordinary Future conference this coming Wednesday at Vancouver’s Convention Centre East Building, and signed on as a sponsor.

We’ve been talking about VR companies for a while, in glowing terms and not-so-glowing, but because we feel like the time is coming for VR to really kick it up a notch soon, Equity.Guru recently relocated our AV studio to a VR workspace in Vancouver’s Railtown, and invested in a yet-to-be-publicly-unleashed 360-degree, 3D, virtual reality camera that we’ll be using for our livestreams, and for deeper looks at client facilities going forward.

And while we burrow into that brave new world, we’ve been introduced to a plethora of interesting VR/AR companies based out of Vancouver, that are closing in on that point where they could be the next wave of public companies.

I’ll be talking with people from several of those outfits Wednesday, about where investors should be looking for the next billion-dollar tech opportunity in the VR space.

Present on my panel at 2:30pm at the Speakers Hall will be:

Pop by the Equity.Guru booth where we’ll (Convention Centre internet-connectivity dependent) have some of those companies showing their tech off. Slap on a headset and enjoy.

Also at the conference will be panels and booths related to:

For more info on the conference, and to register yourself as a guest, go to https://extraordinaryfuture.com/e/extraordinary-future-2017-71 and use the promo code PARRY25 for a 25% discount on registration.