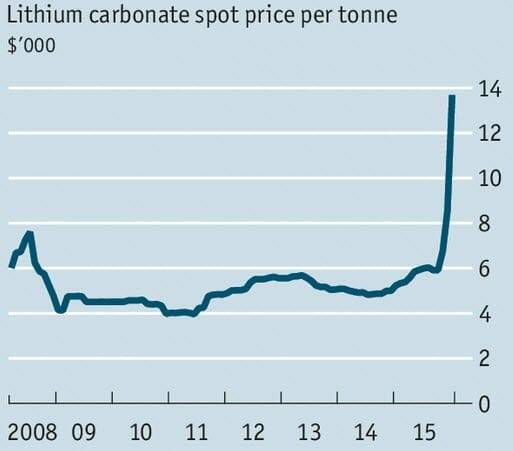 Greg Reimer is the former Executive Vice-President of BC Hydro’s Transmission & Distribution network.  BC Hydro is Canada’s 3rd largest electric utility with over $5.7 billion in revenue.  Greg has a wealth of operational experience and strong leadership skills from over 26 years in the public sector.  A Certified Public Accountant by profession, Greg held a number of senior leadership positions in in the public sector prior to joining BC Hydro.

At BC Hydro, he was responsible for approximately 2,300 employees in charge of planning, designing, building, operating and maintaining the systems and assets needed to deliver electricity safely and reliably to BC Hydro’s 4 million customers.

I’m catching Greg early on in his Directorship duties at LiCo, but I was very interested in why a senior, Big Company guy would be attracted to a small cap exploration company.  It turns out he’s passionate about green energy and high tech metals.  So am I!  This interview was conducted by phone and email over the period August 30-September 5th.

Greg Reimer:  LiCo Energy Metals (TSX-V: LIC, OTCQB: WCTXF) is an innovative, forward thinking company exploring for two of the most important and sought after battery/energy metals, Lithium (“Li“) and Cobalt (“Co“).  We have a growing portfolio of highly prospective projects in mining-friendly jurisdictions within Canada, the U.S. and Chile.  We have a 50% Earn-in option on a Li property in the heart of the Atacama salar in Chile, the single best Li jurisdiction on the planet, 2 Li projects in Nevada and, importantly, a really exciting Co project in Ontario, Canada.

We are one of only about 5 publicly-listed juniors to make a decisive move into the Chilean Li brine sector with our 50% Earn-in on the Purickuta Project, a more advanced ‘exploitation’ concession, not an ‘exploration‘ concession (more about that later).  The big news at the moment is that we have reached an agreement to acquire a land package from Glencore that’s adjacent to our option on 100% of the Teledyne Cobalt project in Ontario.  We think Glencore’s vote of confidence in our team to advance their Co asset says a lot about the strength of LiCo Energy.

[ER]: What attracted you to the LiCo Energy?

Greg:  I was introduced to a large shareholder of LiCo and found that he shared my views for the future electrification of the global transportation fleet.  And, from my background in the utility sector, I know first hand that distributed generation such as solar and other renewable energy sources will continue to make significant inroads in global energy markets.  It’s merely a question of regional economics, more a question of when, not if, the paradigm shift will occur.  These renewable energy sources become more valuable with local, community and grid level battery storage. 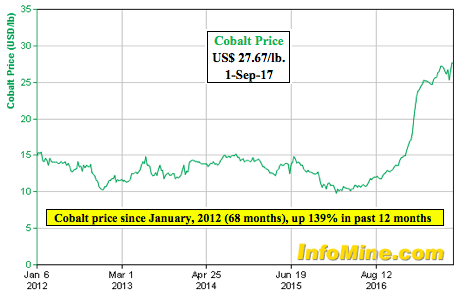 More to the point, I was impressed with the corporate culture.  Although a small company, it is run efficiently and has strong financial backing.  I share both LiCo’s values and its vision, so I joined the Advisory Board in June.  As I got to know (President/CEO) Tim Fernback, (Director), Dwayne Melrose and others, I was impressed by their knowledge of key Li / Co jurisdictions, the projects they’ve locked in and the prospective transactions in the pipeline.  I decided that I could add a lot of value to what the team is already accomplishing.  I’m thankful that the Board appointed me and I’m excited to hit the ground running.

Greg:  This transaction is very important for the Company and is one of the reasons I joined the Board.  It took a lot of time to get across the finish line, but the team did an excellent job structuring a win-win agreement for us and Glencore.  Readers should note that Glencore only agreed to sell the property to us with a back-in provision.  That can only mean one thing, they believe in the project and they believe in our team to unlock its potential.  More specifically, they are likely encouraged, like we are, by the prospects of exploring (and possibly developing), our Teledyne Co project together with their property.

The Glencore property sits along the west boundary of our Teledyne project.  Teledyne covers the southern extension of a prolific vein on the past-producing Agaunico Mine.  NOTE:  {Agaunico produced 4,350,000 lbs. of cobalt and 980,000 oz. of silver during the mining boom of the early 1900’s [Cunningham-Dunlop, 1979]}  As Tim Fernback commented in the press release, ‘If all goes as planned, we could be selling all our cobalt back to Glencore…. It is a property sale, but we have also found a significant future customer.’

[ER]: What historical evidence from both properties makes the whole potentially greater than the sum of the parts?

Greg:  That’s a good question.  There are assays from 36 drill holes on Glencore’s property from the early 1980’s that outlined 2 distinct vein systems hosting significant cobalt and silver grades.  One of the systems had a north-south strike, which is hypothesized as the southern extension of the #3 vein from the Cobalt Contact Mine located immediately to the north of the Glencore property. 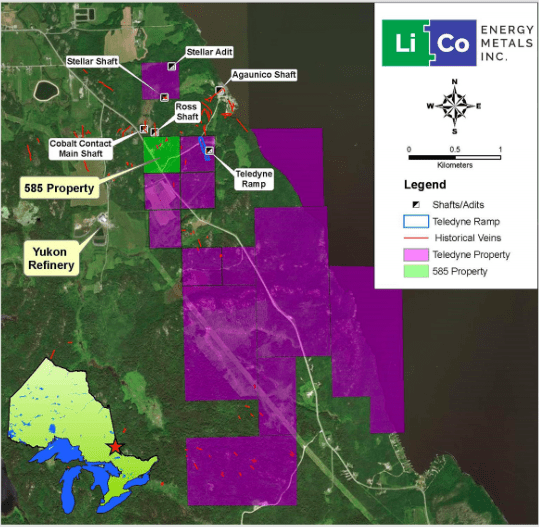 On Teledyne, historical drilling also encountered 2 zones of cobalt/silver mineralization extending from the Agaunico Mine in a north-south direction.  In 1980, a 700 meter production decline was completed at Teledyne to reach the mineralization encountered from drilling.  Drilling confirmed the extension of the Agaunico cobalt zones onto the Teledyne property for a strike length of about 150 meters.  So, in other words, it does seem to make a great deal of sense to advance both properties at the same time.

Greg:  With all the recent excitement over our Cobalt assets in Canada, it would be a mistake to overlook our exciting lithium play in Chile.  The Purickuta project is not only located in the world famous ‘Lithium Triangle,’ covering parts of Chile, Argentina & Bolivia, it’s also in the heart of the single best salar in south America.  The giant Atacama salar in Chile hosts the 2 lowest-cost, highest-grade Li brine facilities on earth.  Lithium Majors Albemarle andSQM have long-standing operations, pumping up shallow Li with reported grades of about 1,800 mg/L Li.

Our 50% Earn-in opportunity on Purickuta is noteworthy for a number of reasons, but mostly because it has been granted an ‘exploitation’ concession.  Almost all other concessions controlled by Li juniors with properties in Chile are exploration concessions.  Without going into the details, suffice it to say that if our initial drill program is successful, we could potentially fast-track the project into development and attract partners to help fund it.  We continue to be in talks to option or acquire additional property in and around Purickuta.

[ER]: Do you have a favorite between Lithium & Cobalt?

Greg:  A favorite?  Both metals are incredibly important, as are nickel & copper and a few others, but I think it’s worth pointing out to your readers that the largest source of Co, by far, like over 50%, comes from the Democratic Republic of Congo (“DRC“).  So, while there’s great demand for both Li & Co, the future, sustainable supply of ‘conflict-free’ Cobalt is far less certain.  I think our project, combined with Glencore’s, could become a valuable and secure source of Co supply in North America.  That’s if exploration and development warrants a production decision on one or both projects.

[ER]: What will be your primary focus as a Director of LiCo?

Greg:  My role is as a Director is still taking shape, but there are several specific areas in which I believe I can add a lot of value.  For example, a previous position I held was Deputy Minister of Energy, Mines & Petroleum Resources in BC.  I dealt with a wide-range regulations and policies among various interested parties, including Aboriginal groups.  This experience could be helpful in our discussions with local communities in Chile and Ontario.

Many Li and Co junior management teams and Boards have members with ties to exploration & development of minerals/metals, or in autos / transportation, but I imagine very few have an extensive background on the Utility side.  That gives us a big advantage on the grid-scale energy storage part of the equation.  There are three legs to the energy storage stool, local, community and grid-level battery storage.  Taken together, they will become a much larger part battery material consumption by the mid 2020’s.

[ER]: Greg, thank you for your time.  Do you have any final comments for readers?

Greg:  Thanks, Peter.  To recap, I’m excited to be a part of the LiCo Energy Metals TSX-V: LIC, OTCQB: WCTXF team– a team that’s a first mover in lithium in Chile, one of the very few teams that have assembled both Li and Co assets under one roof and a team with strong values and a shared vision of the future.

Disclosures: The content of this interview is for information only. Readers fully understand and agree that nothing contained herein, written by Peter Epstein of Epstein Research [ER], (together, [ER]) about LiCo Energy Metals, including but not limited to, commentary, opinions, views, assumptions, reported facts, calculations, etc. is to be considered implicit or explicit investment advice. Nothing contained herein is a recommendation or solicitation to buy or sell any security. [ER] is not responsible under any circumstances for investment actions taken by the reader. [ER] has never been, and is not currently, a registered or licensed financial advisor or broker/dealer, investment advisor, stockbroker, trader, money manager, compliance or legal officer, and does not perform market making activities. [ER] is not directly employed by any company, group, organization, party or person. The shares of LiCo Energy are highly speculative, not suitable for all investors. Readers understand and agree that investments in small cap stocks can result in a 100% loss of invested funds. It is assumed and agreed upon by readers that they will consult with their own licensed or registered financial advisors before making any investment decisions.

At the time this interview was posted, Peter Epstein owned shares and/or stock options in LiCo Energy and the Company was an advertiser on [ER]. Readers understand and agree that they must conduct their own due diligence above and beyond reading this article. While the author believes he’s diligent in screening out companies that, for any reasons whatsoever, are unattractive investment opportunities, he cannot guarantee that his efforts will (or have been) successful. [ER] is not responsible for any perceived, or actual, errors including, but not limited to, commentary, opinions, views, assumptions, reported facts & financial calculations, or for the completeness of this article or future content. [ER] is not expected or required to subsequently follow or cover events & news, or write about any particular company or topic. [ER] is not an expert in any company, industry sector or investment topic.