In July, the TSX Venture exchange approved a transformational deal in which Velocity acquired options on two highly prospective properties in southeastern Bulgaria.  In conjunction with these new assets, a talented new management team and Board is in place.

Velocity is aligned with private Bulgarian gold miner Gorubso Kardzhali {owner of the optioned projects and the only company in Bulgaria with a permit for cyanide-related processing of gold ores}.  Gorubso has been producing from its high-grade underground Chalagold mine for over 10 years and owns / operates a newly built (2011) Carbon-In-Leach (“CIL“) processing plant that has excess capacity.  Close ties with Gorubso is helping immensely in interactions with local communities and governmental bodies.  {See Corp. Presentation}

Velocity holds an option, exercisable for 6 years, to acquire an undivided 70% Interest in the Tintyava property, granted by Gorubso Kardzhali A.D. (“Gorubso”).  The Rozino project, the subject of a recently filed Technical Report, is located within the Tintyava property, which has an area of 163 sq. km.  To exercise the option the Company must deliver a NI 43-101 compliant PEA.

The Rozino project is located 20 km east of the Ada Tepe gold deposit being developed by Dundee Precious Metals, 50 km southeast of Kardzhali, host to tailings & gold processing facilities operated by Gorubso, and 350 km east-southeast of the capital of Sofia. 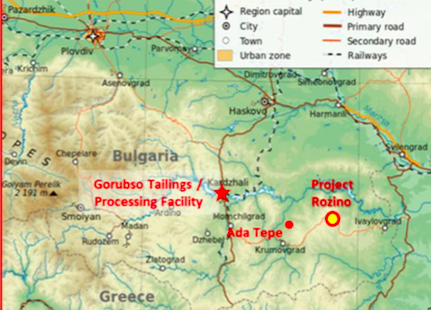 On August 21st, results of the first 2 drill holes at the Company’s Rozino gold project were released.  Additional drill results are expected in the first half of September.  Regarding the first 2 holes, Keith Henderson, Velocity’sPresident & CEO commented,

“These results are among the best grades ever returned from the project and the drill holes clearly demonstrate the potential for thick, high-grade gold mineralization between historical drill fences.”

Notice that I added boldface in the above quote, “between historical drill fences.”  To a large degree, the success of Velocity Minerals’ main project revolves around that sentence.  In the 1980s, a Bulgarian State-run company explored Rozino under the erroneous assumption of a flat-lying exploration target (which called for routine vertical drilling).

However, as Gwen Preston editor of, “Resource Maven” explained in her recent report on Velocity,

“….the gold was not in a flat lying body but in steeply dipping structures that the vertical holes missed completely.  In most cases, each vertical hole cut between two steep structures and therefore only cut through the disseminated mineralization in between.  The next round of exploration from 2001 to 2005 involved angled holes, but the geologic concept was still flawed – this group drilled angled holes, but to the northwest.   As a result, they too drilled parallel to and between the mineralized structures at Rozino, which run northwest and dip very steeply.”

— Gwen Preston, editor of Resource Maven, a weekly newsletter on investing in the metals space

Therefore, the news of the first 2 drill holes, including a near-surface interval of 39 m of 4.11 g/t Au goes a long way towards supporting the thesis that decades worth of historical drilling provided some useful information, but was largely ineffective.  These results come on top of the only other angled drill hole, drilled in the right direction….  #R-245 in 2006 by Asia Gold, returned 68 m @ 3.15 g/t Au, including 11.39 m @ 8.09 g/t Au.  If management is on to reasonably thick, near-surface intervals of 2-4+ g/t gold, (the Company will be drilling for several more months) then other key aspects of the Rozino project will take on new meaning.

By that I mean, for example, there are very promising historical trench samples including, 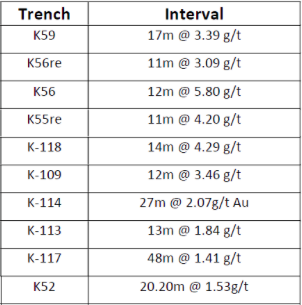 But these samples were never followed up on, perhaps because ongoing drill results (drilled in the wrong orientation) were not as exciting as what Velocity might find.  Still, according to the technical report, the potential for additional sub-parallel vein zones to the main deposit is thought to be good and the targets there are essentially untested by drilling.

And that’s not all, in addition to strong trench samples, note what the technical report had to say about preliminary metallurgical test work (– page 20),

“Preliminary metallurgical test work carried out by Geoengineering, Lakefields, Caracal and Wardell Armstrong suggests that recoveries by cyanide leaching are above 90%, with no deleterious elements and the deposit should be amenable to simple low cost processing. This is consistent with LSE deposits elsewhere in the world, where similar grade mineralisation is mined.” 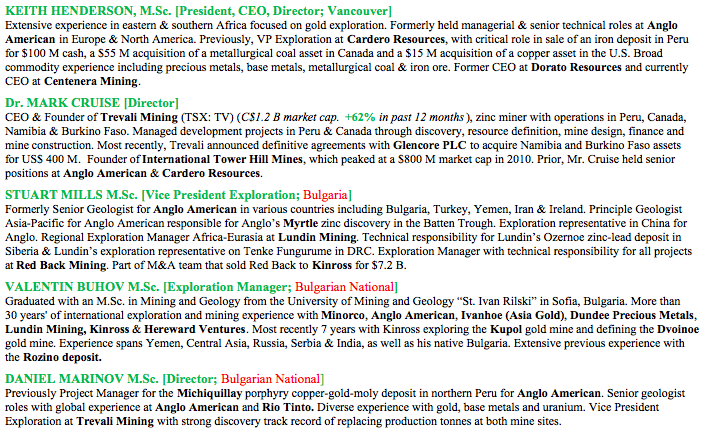 Velocity Minerals scores very high in terms of boots on the ground.  In addition to the close working relationship with Gorubso, two of Velocity’s top five executives are Bulgarian Nationals and VP of Exploration Stuart Mills is working full-time in Bulgaria.

Management has signed an exclusive 12-month option agreement with Gorubso to contemplate a joint venture to enhance/expand Gorubso’s Chala gold mine and, if warranted, the CIL plant.  That arrangement could possibly include feeding the plant with ore from one or both of Velocity’s projects.  If a win-win agreement can be reached, Velocity could effectively be in production (in partnership with Gorubso) as soon as next year.

Velocity is organizing and digitizing Gorubso’s 10+ years of mining data at the Chala gold mine to understand the likelihood of significantly more (tonnage and/or higher grade) gold mineralization being identified.  Although I hesitate to enlist the overused phrase, “huge blue-sky potential,” a JV with Gorubso could be a really big deal.  If structured right, it would greatly de-risk the development of Velocity’s 2 projects, slash upfront cap-ex requirements, facilitate / reduce permitting costs & time lines and simplify operational flow sheet design (especially if Gorubso’s CIL plant were to be utilized).

Management is laser focused on resource drilling to produce an open-pittable resource estimate.  Importantly, since previous resource estimates were limited by mistakes in the orientation of drilling, the final resource reported to the Bulgarian government was severely restricted, it had no resource blocks between drill fences.  Management believes that substantial infill potential around the main deposit exists between drill fences, and mineralization remains open to the southeast and northwest.

A total of 9 diamond drill holes (approximately 2,000 m) are planned for Phase I, of which the first 2 holes have been reported.  The program is part of a larger campaign of up to 65 drill holes (~12,000 m), planned to be ongoing through the remainder of 2017 and into early 2018.  Additional drill results are expected in the first half of September.

I only briefly mention Velocity’s 2nd project, Ekuzyata, a 50% Earn-in opportunity, {or revert to 5% GSR} because the main focus is Rozino.

Any discovery could be within reach of existing Chala mine infrastructure, so there would be limited need for additional capital if Gorubso and Velocity were partnered.  Ekuzyata is located within Gorubso’s mine concession, no additional permitting would be required.

Drill results in September/October will carry a lot of weight, if they continue to be as good or better than the first 2 assays, the Rozino project will have (both) less risk of there being no meaningful resource, and more upside potential from near-surface, high-grade zone(s) of Au mineralization. 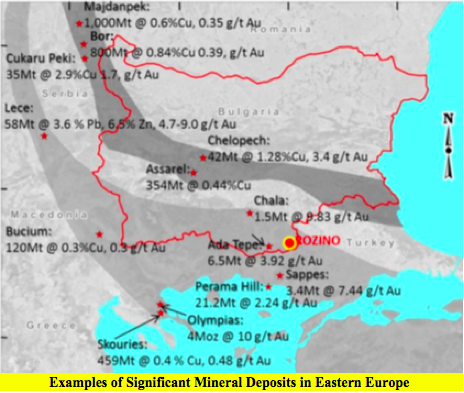 Success at Rozino should increase the likelihood of a JV with Gorubso, which would be a win-win for both companies and a win for local communities.

To recap, Velocity Minerals (TSX-V: VLC) is funded to explore an overlooked property that could be fast-tracked into development (if warranted by further drilling), potentially in partnership with existing producer Gorubso.  A prospective JV could save Velocity Minerals a tremendous amount of development capital, allowing the Company to minimize equity dilution.  Currently there are 57 M shares outstanding, (66 M fully-diluted), no debt or preferred shares.  The market cap is ~C$ 18 M.  {See Corp. Presentation}

To the extent that permitting and other key development & construction activities could be facilitated by Gorubso’s experience and connections, that too could expedite Rozino’s and/or Ekuzata’s path to potential production.  Combined, Gorubso with its operating mine and CIL plant and Velocity with Rozino, Ekuzata and its stronggeological, exploration & technical team, could become a regional powerhouse capable of accretive acquisitions of nearby mining assets.

Disclosures: The content of this article is for information only. Readers fully understand and agree that nothing contained herein, written by Peter Epstein of Epstein Research [ER], (together, [ER]) about Velocity Minerals, including but not limited to, commentary, opinions, views, assumptions, reported facts, calculations, etc. is to be considered implicit or explicit investment advice. Nothing contained herein is a recommendation or solicitation to buy or sell any security. [ER] is not responsible under any circumstances for investment actions taken by the reader. [ER] has never been, and is not currently, a registered or licensed financial advisor or broker/dealer, investment advisor, stockbroker, trader, money manager, compliance or legal officer, and does not perform market making activities. [ER] is not directly employed by any company, group, organization, party or person. The shares of Velocity Minerals are highly speculative, not suitable for all investors. Readers understand and agree that investments in small cap stocks can result in a 100% loss of invested funds. It is assumed and agreed upon by readers that they will consult with their own licensed or registered financial advisors before making any investment decisions.

At the time this interview was posted, Peter Epstein owned shares and/or stock options in Velocity Minerals and the Company was an advertiser on [ER]. Readers understand and agree that they must conduct their own due diligence above and beyond reading this article. While the author believes he’s diligent in screening out companies that, for any reasons whatsoever, are unattractive investment opportunities, he cannot guarantee that his efforts will (or have been) successful. [ER] is not responsible for any perceived, or actual, errors including, but not limited to, commentary, opinions, views, assumptions, reported facts & financial calculations, or for the completeness of this article or future content. [ER] is not expected or required to subsequently follow or cover events & news, or write about any particular company or topic. [ER] is not an expert in any company, industry sector or investment topic. 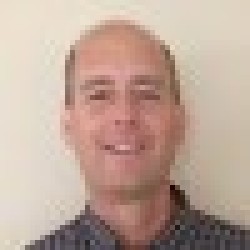