Nano One (NNO.V) is the mother of all wealth creators

New investors are often told, “only invest in things you understand”.  That’s good advice, but if you take it literally – opportunities to generate wealth will pass by.

Got it?  Neither did we.  But how about this?  “Applied Optoelectronics owns patents that allow them to make fiber optics stuff cheaper than anyone else.”

AAIO stock has created an army of millionaires. More about them later.

Nano One (NNO.V) a $64 million Canadian company – also has a complicated-sounding business model:

“The Nano One process can be configured for a range of different nanostructured materials and has the flexibility to shift with emerging and future battery market trends and a diverse range of other growth opportunities.”

But what if we dumbed that down and told you “Nano One has developed proprietary technology that will let battery-makers save money.”

If you know that “proprietary” means no-one-can-use-the-technology (without paying Nano One) – and you know that batteries are a big deal – maybe that’s enough.

Nano One was one of Equity Guru’s first loves.  When you see the chart below you’ll realise that it’s been a volatile visceral relationship.  Yes, we both sleep around, but there is a core of mutual affection. We have grown together. 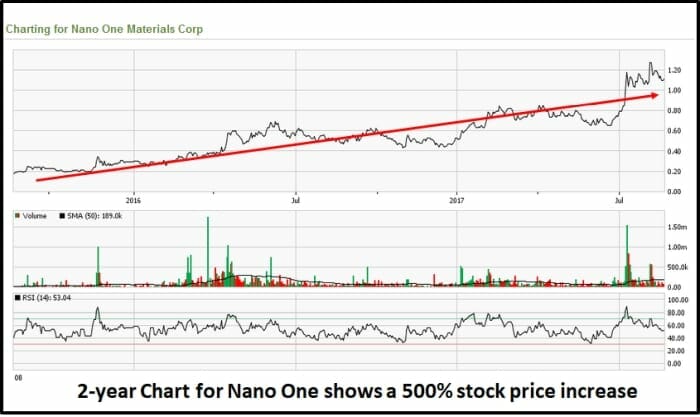 As Chris Parry explained in the courtship phase:

“NNO has technology that can help nano needs be met not by lithium, which is expensive and is supply-strangled, but by lithium carbonate, which is cheaper and not so tough to find.”

Here’s the technology explained in a pretty picture: 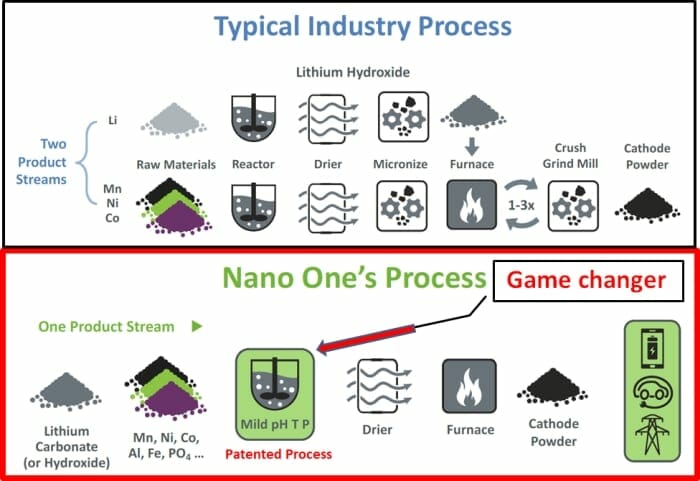 According to NNO literature: “By cost effectively controlling the structure and size of these powders at the nanometre scale, in bulk industrial quantities, Nano One believes it can enable industry to adopt the remarkable properties of nanomaterials for a much broader [writer’s emphasis] set of market applications.”

The key word there is “broader”

“Those patents are not material specific. They are BROAD patents which means, if anyone, anywhere, decides they’re going to start farting about with materials to make nanotechnology a little cheaper, easier, whatever, they’re going to have NNO’s lawyers peering over their shoulder, saying “where’s our licensing fee?”

On August 2, 2017, NNO filed a patent to promote yield improvements in the manufacture of cathode materials for use in advanced lithium-ion batteries.

Nano One anticipates a 100-fold increase in the material throughput of its core technology at the reactor stage of the process. The existing pilot reactor can be increased from 10 kg/day to 1,400 kg/day.

What this means is that NNO can become a commercial producer of cathode materials with a piece of machinery that was designed only to test the technology.

“These innovations move our pilot-sized reactor into the range of full-scale production,” said Dr. Stephen Campbell, principal scientist at Nano One, “and demonstrate a clear path to a 10,000 kg/day plant. It builds on innovations announced earlier and marks our fifth patent application since this time last year.”

Seed investors and company management are not the only the parties who believe in this technology.  Do you see the little Canadian Flags on the time-line below?  Those are government grants from the scientific community. Or, in “investor-speak”:  free undilutive money.

“The throughput of our pilot reactor is significantly more compelling than originally anticipated,” stated Nano One CEO Dan Blondal.  “We look forward to discussing the reduced cost implications with a growing network of commercial interests.

You can imagine walking into the General Motors (GM.NYSE) production office with this chart: 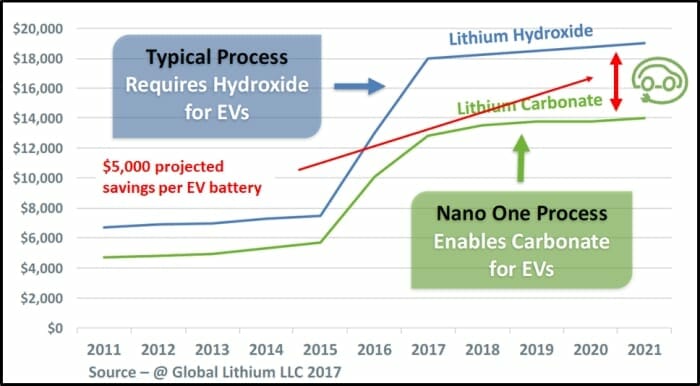 Probably not gunna be the hardest sell you’ve ever done.

Five years ago, AAOI (the confusing fiber optics company) was trading at $10.  It’s now $62 and climbing, with a market cap of $1.4 billion.

Being an expert on a movie doesn’t mean you’ve memorized all the dialogue.  It means you know the genre and can name the lead actors.

Two years ago, we understood very crudely the plot of Nano One.  Our understanding is still crude.  But we are a little bit richer.

The global addressable market for cathode materials is 500,000 kg/day.

Full Disclosure:  Nano One used to be an Equity Guru marketing client.  They are not any more.  But that will not stop us writing about them.