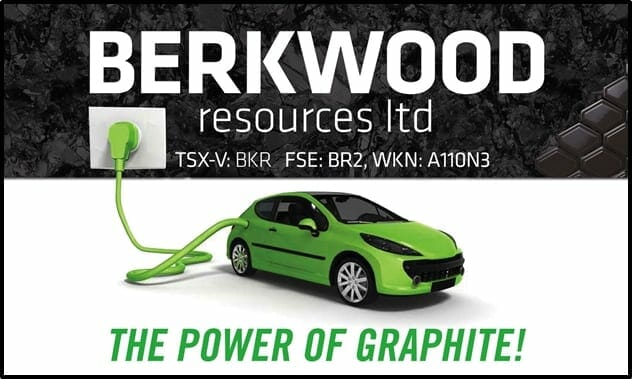 Question:  How many personal devices do you own that require lithium-ion batteries?

For us, the answer is nine: (cell phone, laptop, calculator, smoke detector, deck lights, I-pad, flashlight, conventional car battery and universal remote).   The total cost of those devices is approximately $165. Each battery is packed with graphite.

Investing in early stage graphite projects is a good way to make money.

On August 16, 2017, Berkwood (BKR.V) announced that drilling has begun on its Lac Gueret South Graphite Project located in Quebec.  Drill pads have been prepared for the first round of drilling in the Zone 1 area.

The plan is to punch 18 inclined drill holes, between 60 and 120 meters. A drill is on site ready to begin drilling on August 16th. Berkwood has applied for – and received – an amended permit that green-lights a multi-phase exploration program. 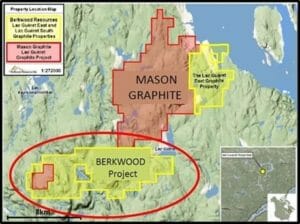 “Closeology” (my neighbour is successful!) is not an inspirational way to message a mineral company. It can also be misleading (being 25 kilometers from a massive lens of jade doesn’t give you a profitable end-game if there’s no jade on your property).

That said, Mason Graphite is the elephant in Berkwood’s room.

Mason has a high-grade resource adjacent to – and geologically similar to – Lac Gueret South.  Not talking about Mason Graphite would like a real estate agent showing a beachfront property and failing to enter the room with the best ocean view.

Metal grade equivalencies at Mason Graphite were calculated for the mineral resource at 20.4% Cgr.

Mason Graphite is a more advanced company than Berkwood (its market cap is 2,800% higher).

It is instructive to observe the market’s enthusiasm. 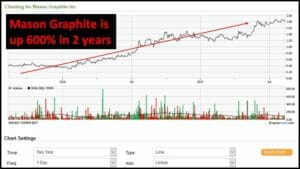 “Two distinct electromagnetic conductors appear to occur over a two-kilometer length and 50 meters to 600 meters in width as defined by airborne EM geophysics. The western area is interpreted as a potential bulk graphite zone.”

Eleven grab samples were collected in the vicinity of the Zone 1 anomaly: three of these samples contained 36.3%, 14.4%, and 1.04% Cgr (Carbon as Graphite) respectively. This could mean that the anomalies are large graphite zones.

“Zone 2 is contiguous with the southern limit of the Mason Graphite claim boundary and along strike from the graphite zones of Mason Graphite. The larger conductor extends 1 kilometer in length and 60 meters in width.”

As well as graphite, lithium-ion batteries require cobalt and lithium.  All three of these critical elements are projected to go into supply deficit due to surging demand from new technologies including electric vehicles.

Berkwood is a rare battery “pure-play”.

Along with the flagship Lac Gueret South graphite project, the company has cobalt and lithium projects.

Earlier this summer Berkwood entered into an agreement to acquire The Cobalt Ford Property which consists of 40 prospective cobalt claims.  The property is situated near extensive infrastructure.  The Manic 5 hydro electrical dam is located approximately 15 km south of the Property.

On July 11, 2017 Berkwood announced it has acquired a package of 53 lithium claims, east of Simon Lake, Quebec.  The “Delbreuil Lithium Project”, located in the Abitibi District, is road accessible and located in an established lithium-rich region.

All Berkwood’s properties are in Quebec – a province that is investing $1.3-billion in mining infrastructure over the next 5 years.  By 2035, the government hopes to attract a total of $50-billion in private investments, of which at least $2.5-billion will be public money. 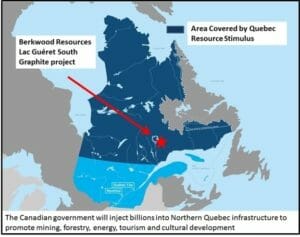 If I owned an Electric Vehicle, the value of my personal batteries would increase 9,000%. Chevy Bolt’s replacement battery is listed at $15,700.

The graphite story is growing.  We believe Berkwood is a legitimate part of this story. The stock is cheap. The drills are turning.  Admit it, you’re tempted.

FULL DISCLOSURE:  Berkwood Resources is an Equity Guru marking client. More than a few of us are long on the stock.