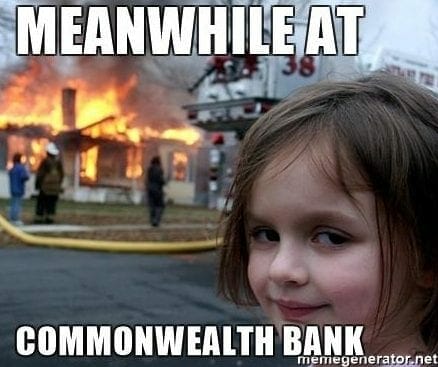 UPDATE: Less than 12 hours after going to press CBA announces Narevs’ departure from the bank in 2018.

Welcome to the 2nd week on The Cheetah. Check out our first installment here.

There are nightclubs, and then there is Berghain (pronounced Berg-HINE).

Occupying an old power station in what was once East-Berlin, it has a cult like following among those who subsist mainly off Electronic Dance Music (EDM). Whatever hedonistic deeds take place inside Berghain stay there. Photography inside the club is strictly verboten.

Known for having the strictest door policy on the planet, getting into the club is anything but assured. After waiting for up to 3 hours in the cold of night, you need to convince uber-bouncer Sven Marquardt that you’re a worthy addition to that evening’s crowd.

Sven is no pushover. When asked in an interview about his face tattoo, consisting of strands of barbed-wire, he retorted “I’ve never regretted it. I mean, it was pretty much clear I wasn’t going to go into banking.”.

Just so you know where you stand, so to speak.

Despite the hundreds of websites aiming to provide all the tips you’ll need to get past Sven and his team (Look bored, wear all black, only speak German), the typical outcome is to be turned away and have to endure the walk of shame past the next contestants.

Said last week that 5800 looked unlikely to be exceeded in coming weeks, and the past weeks’ action only seemed to strengthen our conviction on this call.

Right now the XJO looks as likely to get past the impenetrable 5800 level as I am to gain entry into the aforementioned club.

Shame, because I’m told the ice cream they sell inside, at about a buck a scoop, is sensational.

Which banks credibility is on the line?

The Commonwealth Bank (CBA.AX) is Australia’s oldest and largest bank.

Increasingly though, it’s one that many Australians must surely feel embarrassed to be associated with – after all, there now seems to be a scandal every other week that requires CEO Ian Narev to front a presser and offer up the latest mea culpa.

Shareholders have had a stellar run since the stock was initially offered to the public back in 1991 at $5.40 a piece. With the stock paying out over four dollars in dividends in the past year alone, it’s not hard to see why long term holders have a permanent smile on their face. 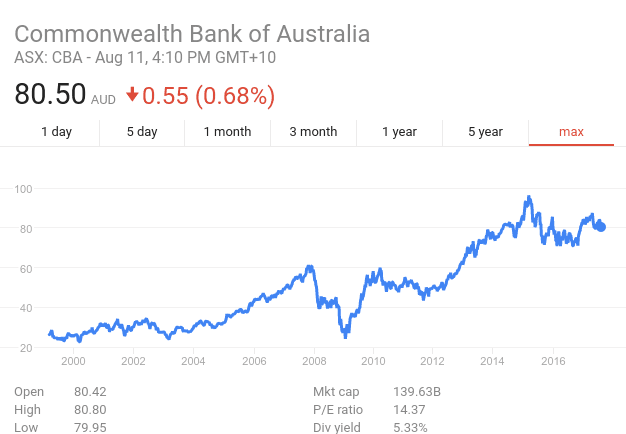 The music always stops at some stage, and there are never enough chairs.

During his time at the helm, Narev has overseen three explosive scandals engulf the bank.

The playbook went something like this: mine your customers’ data, find the ones sitting on hefty term deposits paying a pittance and convince them to switch over to high-risk investments that generate fat trailing commissions.

Just leave out the part about the new investments being risky – no need to complicate things for them.

Or, even better, don’t tell them at all. Nothing a little forgery can’t fix.

When the dust had settled, CBA had paid out in excess of $52 million in compensation to customers, some who had lost their entire savings.

After fronting a Senate committee, Narev issued the first of many apologies to customers.

You only know how good your insurance policy is when the time comes to make a claim.

For many Australians, having a heart attack and being unable to work again wasn’t enough to satisfy the claims department of CommInsure, the CBA’s Insurance business, due to their definition of what constituted a heart attack.

Better to arm yourself with lawyers and (favorable) doctors than to have to pay out on policies. Returns to shareholders are, after all, the most important factor.

“If we’re going to use 2 micrograms per liter as our threshold for diagnosing a heart attack, that’s certainly out of date and not the standard we’d apply now,” Dr Andrew MacIsaac, president of the Cardiac Society of Australia and New Zealand said.

Criminals tend to be a few steps ahead. Until they aren’t, of course.

So they must have been delighted when they discovered they could deposit up to AUD $20,000 at a time using the CBA’s Intelligent Deposit Machines (IDM). A few clicks later, the money was heading out of the country on its way to Hong Kong.

Rinse, Repeat. (Hey they don’t call it money laundering for nothing!)

AUSTRAC, the government body responsible for monitoring transactions above 10K AUD, should have been notified, but weren’t. This has been put down to a software glitch.

The person, who does not wish to be identified, said bank executives were warned about system problems involving the the interface with AUSTRAC but said, “No one gave a rat’s arse”.

“Compliance always comes last in CBA and it is frequently and quietly dropped, overlooked and omitted,” said the person. “As for this “software error” … haha”.

How many transactions are we talking about here? Did this happen a few times? A few hundred times?

According to the ABC, AUSTRAC allege that the CBA failed to report 53,506 transactions. Whoa.

We live in a world where personal accountability is no longer mandated at any level of business.

There are systemic problems within the CBA, and the banking sector in general. A Royal Commission is surely not far away in light of the most recent scandal.

As a shareholder, do you really want to sit this one out? (we’re not telling you to sell, but..)

Bottom-line: When you keep fucking up, apologies just don’t cut it anymore.

Should have listened to Parry. Midweek, when the portfolio is hemorrhaging I decide to cut one of the weeds and jettison HVN at $4.44. Very bad luck in Chinese terms to continue holding.

I breathe a sigh of relief days later when the stock collapses into the twenties. Thanks, Confucious!

Batter up! What’s next on the watchlist?

According to their website, “Alumina Limited is a leading Australian company listed on the ASX and the OTC market. Our strategy is to invest world-wide in bauxite mining, alumina refining and selected aluminium smelting operations through our 40% ownership of Alcoa World Alumina & Chemicals (AWAC), the world’s largest alumina business with a production capacity exceeding 17 million tonnes per annum representing approximately 17% of the world’s alumina production.”

For the unschooled (myself included!) Alumina is a chemical compound of aluminium and oxygen and is also known as Aluminium Oxide. It has a number of industrial uses.

The portfolio finished the week on its lows, down nearly 2% from inception. Ugly

FULL DISCLOSURE: None of the companies mentioned in this article are Equity.Guru clients