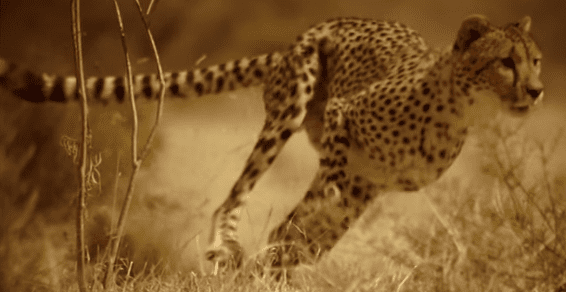 Editors Note:
We’ve asked Amos to expand his coverage of the ASX and provide a weekly column of what’s happening down under. Over to him.

Built for speed they are the fastest land animal on the planet. 0 to 60 MPH in 3 seconds. How’s your Ferrari doing again? They need to eat quickly to protect their kills from larger predators. Only half of their chases, which last up to a minute, are successful. They are solitary animals.

Can you see the similarities when applied to the markets?

We’re not here for shits and giggles. It’s about banking coin because you’re unlikely to get rich working for someone else. Walking away with a merit certificate for participating in the markets doesn’t help you – a quick look at the balance of your trading account always reveals the cold, hard reality.

We want to help you increase that balance by throwing some tips your way – costly lessons learned the hard way with real money on the battlefield of bids and offers.

The week that was 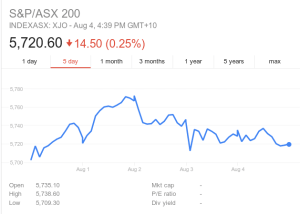 Flew out the gates early in the week only to give most of it back over the remainder of the week. This is a pattern that plays out many times on the ASX. (Sometimes in reverse). The idea is to frustrate longs and shorts in equal measure.

The reasons? Reporting season, for one, the time when ASX companies are required to report their financials (that annoying twice yearly occurrence).

The other factor is the US markets, which are now in the red zone. If we can’t rally on the back of consecutive ATH’s on the DOW then heaven help us when some red starts flowing out of the states.

The S&P/ASX 200 (XJO) is Australia’s primary stock market index. The XJO struggles this time of year because it is unevenly weighted. The Top 50 stocks (which account for 63% to total market cap) have a huge impact on the index overall, and it only takes one or two of them to get smashed (after disappointing the market) to put a dent in the XJO for the day.

Take Wednesday last week when the market was disappointed with Rio’s (RIO.AX) earnings – which actually looked quite good. The 2.5% percent hit RIO took put paid to a green day there and then.

More on that – playing earnings is a mugs game. Why? It’s not the earnings that matter, it’s the market’s reaction to the earnings. Look at it this way – there are 4 possible outcomes and you’re betting on one so you only have 25% chance of being right!

We want the glory. The fame. Our name in lights. Simples.

Oh, and if we win any money then we’ll donate that to charity. Win – Win. And we will!

Thought about looking at 200 charts then quickly dismissed the idea. Hey hang on a minute – why not employ the basic themes we’ve been banging on about for the past 6 months here at Equity Guru?

Firstly, take a look at the chart on your right. That’s not Whitehaven, it’s the Coal ETF (KOL.NYSE) and as the weekly shows it’s just itching to move higher. See how the blue line is above the red one? Hasn’t happened for while right? 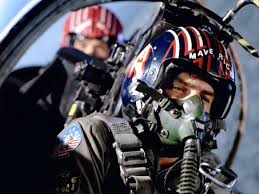 Worried about getting long here? Why?

Ok, Imagine you’re Maverick sitting up front in the Tomcat. You’ve got missile-lock and even Jester want’s you to take the shot. But you can’t pull the trigger right? You say “It doesn’t look any good.”

I’m Goose sitting behind you screaming “Mav, it doesn’t get to look any better than this!

Regular readers will know this isn’t the first time we’ve mentioned coal. When we last highlighted the black death back in April, Whitehaven was sitting pretty much where it is today.

Here’s our thinking on this one: The earnings are going to impress on the back of a rising coal price. In turn, this will help WHC power through the $3.30 resistance that has held it back.

This is not the place to short – get long or stay clear. 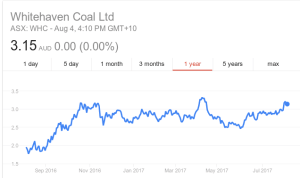 Tip: Don’t do a ton of research and then impulsively buy something else on a whim. Stick to your guns!

Had an in-and-out on Bellamy (BAL.AX). Read more articles through the week on cleanout-crews still working over supermarkets in search of the white gold. The chart showed me enough. Hopped on board but got cold feet when the trade went against me. Dumped it.

Tip: Listen to your gut. Don’t feel stupid for selling a stock soon after you buy it especially if there’s something you missed prior. Doesn’t matter if you’ve owned it for 10 minutes or 10 days.

Stocks you’ve owned are a little like old flames. Some you look back on with great fondness, while there are those that send a chill down your spine and you never want to see again. 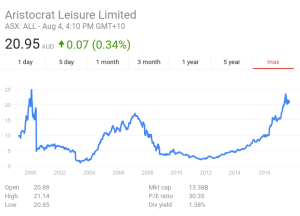 Luckily Aristocrat is in the former category for me, it was the very first stock I purchased in my own name. Remember giving the old man some money once to buy me some BHP shares, but he invested it at the dog track instead and lost.

Tasty Reuben never ran that well at Wentworth Park, come to think of it.

I’m glad to see that long term holders can finally pull those shares out of the bottom drawer and cash out near the previous peak, should they choose to do so.

FULL DISCLOSURE: None of the stocks mentioned in this article are Equity Guru clients. The author wishes he still had his Aristocrat shares – he purchased them at around $3.50