If you pay attention to Google Finance News articles (unlikely recently, due to the high number of spam articles infesting the joint), you’ve probably seen a multitude of ‘news sites’ with names like the Huron Report, or the Utah Herald, or the Flint Daily, or the Evergeen Caller, with articles that read like so much auto-generated bullshit.

That’s because they are auto-generated bullshit.

Because Google has been lax on the moderation end, there’s been a proliferation of crappy bot-written financial content over the last six months that’s shoved original content and company news out of the way.

For example, here’s the news feed for Zinc One (Z.V): 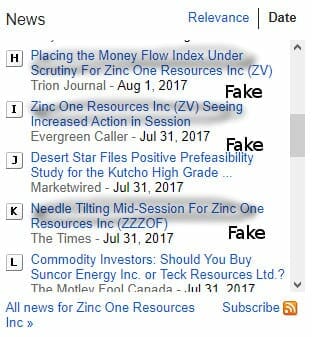 Three of the five stories there are robot-written. This matters because sometimes the robot misses nuance and announces a stock is ‘crashing’ when it’s been rolled forward, as an example. It also matters because these sites are a waste of your time, and giant spam traps that nag you to give you their email address and allow desktop notifications.

So we decided to go on a mission to stomp them out.

We’ve managed to get Google to remove over 35 of them in the last week, which cleaned things up a lot, and we submitted another 40 for removal today.

Here’s what one of those spam networks looks like, from a screenshot of our spam report. 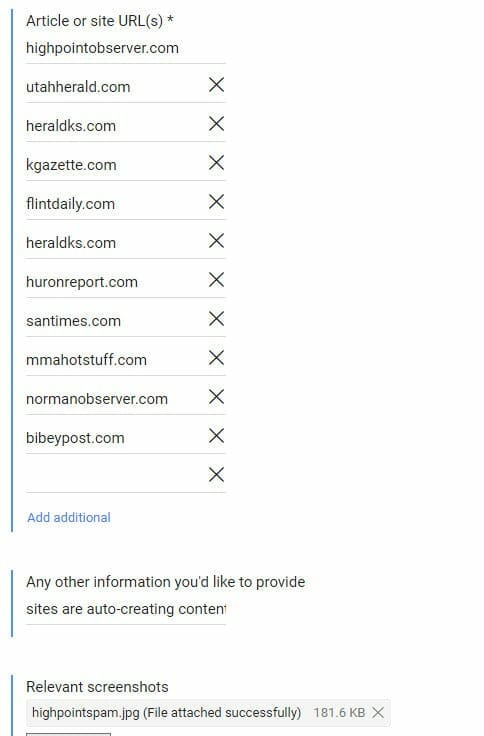 And here’s what it looks like when yo do a Google search for terms often used in their headlines. 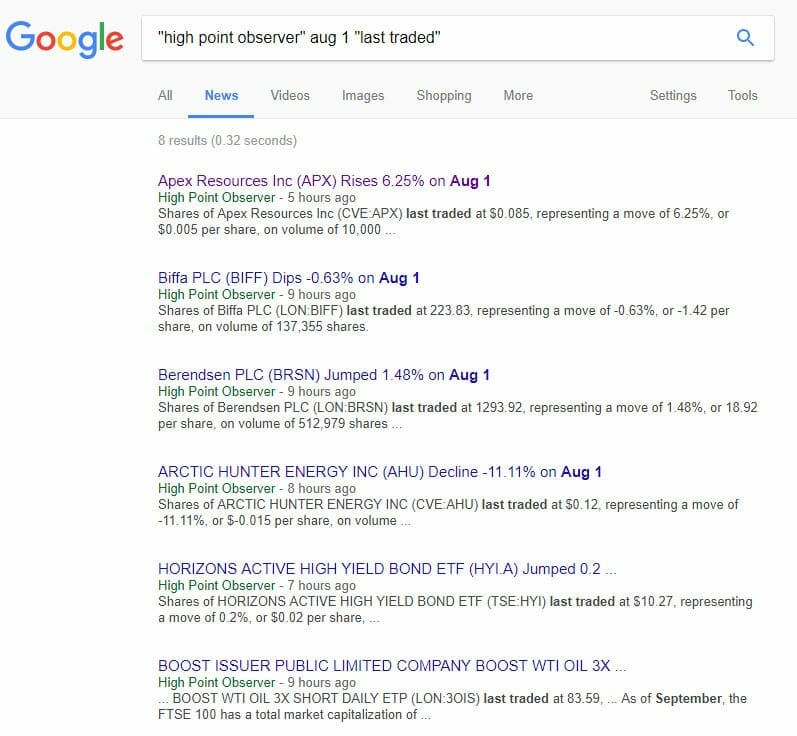 The sites are usually using the same template from one to the next, they run the same content with only mild variations where financial data plugs in, and they run a ton of sponsored links that they make money on if you’re dumb enough to click on them. But the effort levels are low: The BibeyPost.com About Us page is clearly just text taken from the KS Herald About Us page.

Push deeper, to a contact page as an example, and they’ve done only the most basic amount of work necessary to look real. For example, the Contact Page on the Wolcott Daily shows an address in Connecticut and a phone number. The number belongs to a guy named Robert Kelly, who was no doubt confused when his phone rang looking for the Wolcott Daily just now, because he’s not a financial news spammer. He’s just some dude whose phone number was on the internet.

The address on that page is not Robert Kelly’s. In fact, 17 Hilltop Drive, Wolcott CT is a random home in a leafy neighbourhood. 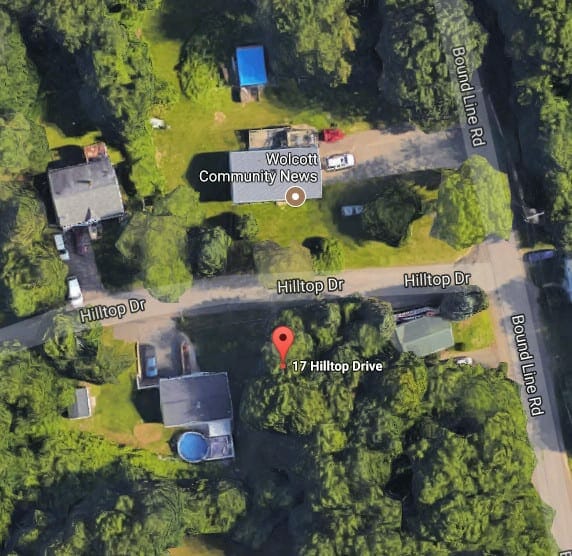 There it is. Nice pool.. But clearly it’s not the home office of the Wolcott Daily.

So why would someone choose this random address? Well, look what’s across the street: An actual local news outfit, the Wolcott Community News. It’s kind of adorable. But it’s no giant spam network. The spammers have searched for a community newspaper, altered its address by one digit, and claimed it as theirs.

The amazing thing about this giant spam operation is just how little money they make out of it. According to cutestat.com, the Wolcott Daily (which it confirms is hosted on the same IP address as all the others) generates around $4 a day from Google Ads, going by its daily traffic (about 650 people), and since it has been online for six months, that means this entire waste of everybody’s time and energy has made a total of $750 for the motard that put it together. Admittedly, they’re running about fifty of these sites, but most are deathly absent of readers. The Norman Observer makes around $0.15 a day, or $27 since inception.

It took us about two hours to round up most of the most egregious offenders and took Google a few days to stomp them out, but the fact they’ve been allowed to exist at all past a few days is down to users of Google Finance (which feeds an awful lot of places) not bothering to do their own policing.

For the record, if you spot a spammy finance site on Google’s network, REPORT IT HERE and they’ll kill it. If you do that, we all get a cleaner playground to find profitable deals.

I’m looking at you, Stockhouse and Equities.com – pull your weight.

ADDENDUM: We did more digging and found that a large number of these fake sites haul in email addresses for a site called Penny Stock Wired, and that domain was listed as belonging to Chris Smith of Destin, Florida, back before anonymous domains were a thing. Can’t tell which of the folks we linked to here is *the* Chris Smith, but my guess is they’ll let us know soon enough. The address listed is a UPS store in a strip mall, natch.

A lot of these sites have affiliate agreements with MarketBeat.com, which pays for email sign ups and is an actual thing with real people behind it. We’d suggest they vet their partners better going forward.