NuLegacy Gold shares traded 10 percent higher on very heavy volume (1.4 million shares vs. 110,000 on average) on July 25, on news that it had discovered a material new gold zone in a wildcat step-out hole 375 metres (1,200 feet) west of the north zone of the Iceberg gold deposit. I think this important development could prove to be a turning point in the fundamental view of the company, especially coming on the heels of last week’s announcement. On July 18, management announced the unrelated discovery of a new structural exploration target (the Western Slope anomaly) with the same geological characteristics as the Iceberg gold deposit.

Last week’s announcement was welcomed by the market. Taken together with the newly discovered gold zone, NuLegacy’s expert technical team has a lot of prospects to draw targets from, and in fact they plan to “promptly locate and drill several follow-up holes to better assess the magnitude of this discovery.”

I touched base with NuGold CEO James Anderson about the latest news and was able to get the following quote:

“This new discovery is open in all directions, in one of the best places to find gold on the planet. There are three 10 to 20 million ounce deposits in a row in the Cortez trend – with our adjacent 38 square mile claim block conceptually holding the fourth in that row. While our exploration efforts have delivered widespread gold mineralization, we’ve not yet found the high-grade ‘roots’ of the mineralizing system. Drill hole IN17-03 may well have put us on to the roots of our gold system.”

Discovery hole IN17-03 has a grade-thickness (grade multiplied by interval length) of 54.7 g/tm, placing it squarely in range of the best results found at Iceberg’s central zone to date. 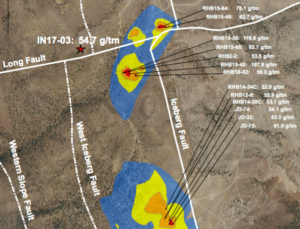 Even after a nice move higher, NuLegacy’s Enterprise Value (its market cap plus debt minus cash) of USD$44 million (July 26 close) is about 20 percent below what it was the day before management announced the first nine assays from its 2017 exploration campaign of 10,500 metres/33,500 feet, +/- 40 drill holes.  Those drill results were a bit disappointing, but the market truly overreacted. Shares ended up trading as low as CDN$0.16 on July 14, from the high CDN$0.20’s in mid-June, equal to an EV of just USD$28 million. Why this brief trip down memory lane?

The negative spell is broken…..

As a quick reminder, pure exploration is a high-risk exercise, especially wildcat step-out holes. NuLegacy Gold is exploring for new discoveries, not infill drilling close to its main Iceberg deposit. Therefore, the first set of results that underwhelmed the market was not bad luck or ill conceived targeting, it was simply….. exploration. One of the reasons for the dramatic sell-off was the fear that the first nine holes might somehow be indicative of how the next 31 holes might pan out.

It wasn’t. There was the real possibility that another set or sets of drill holes would fail to find anything exciting. But that risk (which remains as long as NuLegacy punches wildcat drill holes) is somewhat mitigated by a cash cushion of about CDN$12 million.

Management’s exploration strategy makes perfect sense considering its explicit end game, as stated on NuLegacy’s homepage of “selling to/merging with a qualified producer.” A prospective buyer will need to see evidence of a large-scale opportunity, a potential resource in the millions of ounces. There are two ways to demonstrate that possibility (without actually booking the ounces). Management needs to show 1) multiple widespread, open-ended, bulk-scale deposits and/or 2) meaningful zones of higher grade (> 2-3 g/t gold) mineralization. The team is well on its way towards identifying multiple zones of mineralization, some of it higher grade, like Iceberg’s North Zone.

It’s no secret that mid-tier and major gold producers need to acquire reserves to replace the ounces they’re producing. Due to weak gold prices, exploration and development cap-ex was slashed for most of 2013-15. But the situation is even more dire than the last few years suggest; take a look at the following chart. 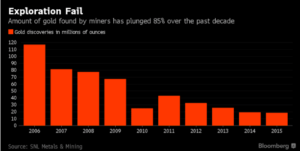 Given the trend in new discoveries, and a significant lengthening in the time between discovery and production in virtually all jurisdictions globally, production growth from the majors is forecast to decline through at least 2020. 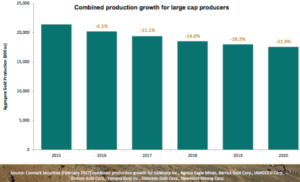 That’s why the discovery of new gold zones like the one announced on Tuesday is so important. NuLegacy need not be the company that actually drills out new discoveries all the way to reserve status. They just need to put deposits on the map, and start to deliver some of the mineral bounty, over time, into a NI 43-101 compliant mineral resource estimate. Prospective acquirers of the company have the financial wherewithal and long-term timeframe to take the prospective ounces from deposit to resource to reserve to production. NuLegacy effectively bridges a mid-tier or major to a potential multi-million ounce reserve, with a five-year head start (Iceberg discovered in 2012). How much is that head start worth to a company that’s tens or hundreds the size of NuLegacy? I believe it’s worth north of USD$44 million.

The number of companies that might be interested in acquiring a company like NuLegacy is surprisingly high. Roughly 60 gold companies have the financial capability and minimum EV (let’s say 10x that of NuLegacy’s) to do so. Very few would fail to benefit by diversifying into the U.S., into Nevada, or expanding a U.S./NV portfolio of projects and mines. Barrick Gold’s Nevada mines are among its lowest cost and most profitable in North America, mines situated just tens of miles from NuLegacy’s 98-square-kilometre land package. 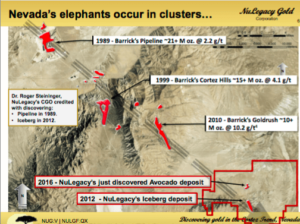 Finally, it’s worth pointing out that a huge benefit that Canadian and Australian gold miners, among others, have been enjoying for years is a strong U.S. dollar. Mining costs in CDN$ or AUD$ vs. selling in US$ was like printing money…. until about four months ago. For example, the USD/CDN foreign-exchange rate has declined from 1.38 to 1.245, down around 10 percent.  To be fair, four months is not a long time in the grand scheme of planning a 20-year mine, but the graph speaks for itself.  This particular currency exchange move might be tied to a certain four-year Presidential cycle….

There are many reasons why dozens of companies, not just gold producers but gold developers and silver producers/developers, will be looking for U.S.-based precious metal assets in ernest. Some for the first time, some doubling or tripling down on safe, high-quality deposits, surrounded by extensive, world-class infrastructure, skilled labour and equipment services, a year-round temperate climate and the rule of law.

NuLegacy Gold has one of the largest exploration-stage land packages in the entire state of Nevada that’s not controlled by a major or by Gold Standard Ventures (GSV.V, with a EV of USD$346 million). In my opinion, it’s a question of when, not if, the company is acquired. In the meantime, management is actively exploring and drilling, making discoveries of new zones of mineralization, “structural exploration targets” and the like. This strategy is not only the ideal one to follow given the end game, but an exciting one to follow as investors in the company.

Disclosures: The content of this article is for information only. Readers fully understand and agree that nothing contained herein, written by Peter Epstein of Epstein Research [ER], about NuLegacy Gold, including but not limited to, commentary, opinions, views, assumptions, reported facts, calculations, etc. is to be considered implicit or explicit investment advice. Nothing contained herein is a recommendation or solicitation to buy or sell any security. [ER] is not responsible under any circumstances for investment actions taken by the reader. [ER] has never been, and is not currently, a registered or licensed financial advisor or broker/dealer, investment advisor, stockbroker, trader, money manager, compliance or legal officer, and does not perform market making activities. [ER] is not directly employed by any company, group, organization, party or person. The shares of NuLegacy Gold are highly speculative, not suitable for all investors. Readers understand and agree that investments in small cap stocks can result in a 100% loss of invested funds. It is assumed and agreed upon by readers that they will consult with their own licensed or registered financial advisors before making any investment decisions.

At the time this article was posted, Peter Epstein owned shares and stock options in NuLegacy Gold and the Company was an advertiser on [ER]. Readers understand and agree that they must conduct their own due diligence above and beyond reading this article. While the author believes he’s diligent in screening out companies that, for any reasons whatsoever, are unattractive investment opportunities, he cannot guarantee that his efforts will (or have been) successful. [ER] is not responsible for any perceived, or actual, errors including, but not limited to, commentary, opinions, views, assumptions, reported facts and financial calculations, or for the completeness of this article or future content. [ER] is not expected or required to subsequently follow or cover events and news, or write about any particular company or topic. [ER] is not an expert in any company, industry sector or investment topic.