A couple of months ago a soccer buddy mentioned that he was newly engaged to a woman he described as “smart, beautiful and unique”. The new couple were about to move in together to test their long term compatibility.  Last night, in the pub – wild-eyed with excitement – he invited me to the wedding.

That’s pretty much the story with First Cobalt (FCC.V) who just announced that its “non-binding” merger agreement (June 26, 2017) with Cobalt One Limited (CO1.ASX) – is now officially binding.

According to the prenuptial agreement, First Cobalt will acquire 100% of the share capital of Cobalt One.  Cobalt One shareholders will receive 0.145 of First Cobalt common stock for each Cobalt One ordinary share held.

The total transaction value is about $140 million on a fully diluted in-the-money basis.  Once the marriage is consummated, Cobalt One will become a wholly-owned subsidiary of First Cobalt. 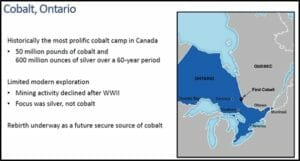 The in-laws (the new company’s board) include Cobalt One Executive Director Bob Cross and Cobalt One Chairman Paul Matysek.

Yes – every company on the TSX.V claims to have team leaders who combine the vision of Steve Jobs, with the wisdom of Warren Buffet and the ruthlessness of Genghis Khan.

But let’s pause for a second and look at these dudes:

Bob Cross co-founded Bankers Petroleum Ltd., co-founded Petrodorado Energy, and until October 2007, was the Non-Executive Chairman of Northern Orion. He also co-founded B2Gold, which produces about 1,000,000 ounces of gold per year and has a $3.7 billion market cap.

Paul Matysek is the former CEO of Lithium One, which merged with Galaxy Resources of Australia in a $112 million deal. He also served as CEO of Potash One, which was acquired by K+S Ag for $434 million in 2011. In addition, Mr. Matysek was the founder and CEO of Energy Metals Corporation, a uranium company that grew in market cap’ from $10 million to $1.8 billion when sold in 2007.

Those aren’t bios – they are trophy cases.

In the meantime, the betrothed couple are in communication lock-down.   Apparently merging two companies listed on different exchanges, in different countries – generates a mountain of paperwork.

”First Cobalt is actively working to finalize all documentation with respect to this transaction and the previously announced merger with CobalTech Mining. The Company anticipates that trading will resume on the Exchange in approximately four weeks.”

That’s like somebody announcing that they have “serious business to attend to” – and then locking themselves in the toilet.  There is no point sniffing at the door jam.  Stand back, give them privacy, and let the fan do its work.

FCC’s acquisition of 100% of CobalTech (CSK.V) will give FCC control of another 11 past producing mines near the town of Cobalt and a 100 tonne per day mill – complementing the Yukon refinery.

Is this important?  Should you give a damn?  Is this an opportunity to make money?

These deals consolidate the largest land packages in the Ontario Cobalt camp into a single landholder with over 10,000 hectares.  The new merged company will be the biggest cobalt explorer on the planet.

The location and the consolidation are important – but if we were talking about decommissioned asbestos mines – there would be no reason to get excited.

Cobalt is a critical ingredient in lithium-ion batteries.  The demand curve looks like the left side of Mount Everest (in the last 25 years – rechargeable battery cobalt consumption has increased 5,000%). 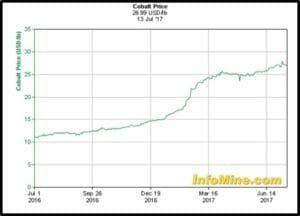 Why they can’t they just build more cobalt mines?

They can and they will.

But there’s a glitch.

Sixty five percent of global cobalt supply currently comes from the Democratic Republic of Congo (DRC).  There are serious (and seemingly unsolvable) child labour problems in the DRC, which is causing companies like General Motors (GM.NYSE), Apple (AAPL.NASDAQ), Toyota (TM.NYSE), and Ford (F.NYSE) – to look for North American supply lines.

“We believe that a rebirth of this historic mining district will occur through the application of modern geoscience, a better understanding of disseminated cobalt mineralization and ultimately, bulk mining methods”, stated FCC President and CEO Trent Mell.

Mell and his team are employing a trusty technique: find a cluster of high-grade underground mines – explore it/expand it with modern technology – and build a higher tonnage, lower grade open pit mine around it.

The marriage is happening.  I’m going to the wedding.  And you?