Lithium-ion batteries require graphite, cobalt and lithium.  All three of these critical elements are projected to go into supply shortage due to surging demand from new technologies.

There are lots of graphite companies, lots of cobalt companies – and more than a few lithium companies. But there are very few companies simultaneously developing all three elements.

Mason projects a $90 million capex to build the mine, a 2.5 year payback and a minimum of 24 years of mine life. Make no mistake, Mason’s project is more advanced.  Mason is currently completing an Environmental Impact Study. But Berkwood’s market cap is 3% of Mason’s – that gives you an idea how much room there is to run if they are on the same geological trend.

Earlier this summer Berkwood entered into an agreement to acquire The Cobalt Ford Property which consists of 40 prospective cobalt claims.

The property is situated near extensive infrastructure.  The Manic 5 hydro electrical dam is located approximately 15 km south of the Property. 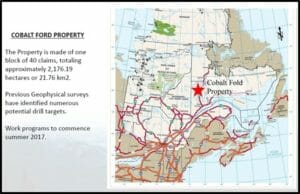 On July 11, 2017 Berkwood announced it has acquired a package of 53 claims, east of Simon Lake, Quebec. The “Delbreuil Lithium Project”, located in the Abitibi District, is road accessible and located in an established lithium-rich region.

To acquire the package, Berkwood made a made a payment of $15,000 and issued 2.1 million shares to the previous project owners.

These projects are generally quicker-to-production than brines. Once Berkwood’s deposit is established – and a mill is built, the lithium carbonate can be produced in a matter of days.

The Delbreuil Lithium Project has been explored for base metals.  The available data on the land package is “historic” – which means it does not meet modern geological standards. So you can discount it, but don’t discard it.

Past exploration programs produced anomalous lithium (1,290 ppm), tantalum (126 ppm) and rare earth elements.  These are called “pathfinders”.  It’s a like hearing an ice-cream truck when you’re looking for ice-cream.  You’re gonna want to follow the sound.

All Berkwood’s properties are in Quebec.  That’s a good thing.  Quebec is awash with government money aimed at stimulating the resource sector. 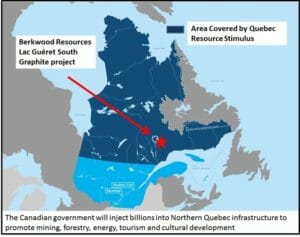 The Premier recently announced that the Quebec government will invest $1.3-billion in infrastructure and other projects over the next 5 years with the intention of catalyzing $22-billion in private-sector investment.

By 2035, the government hopes to attract a total of $50-billion in private investments, of which at least $2.5-billion will be public money.

Quebec is largely unexplored.  Government geologists believe there are massive untapped deposits of cobalt, graphite and lithium lying in the ground.

Two weeks ago Volvo announced that it will completely discontinue the production of gasoline engines in 2019 – shifting its entire product line to electric engines.

Berkwood is fully funded for the current phase of development, and the company has a very tight share structure.

Developing raw materials for the battery industry is like planting bamboo seeds in a colony of Panda Bears.

If it grows, it will be eaten.

Strong assets, a good team and money in the bank.

FULL DISCLOSURE:  Berkwood resources is an Equity Guru marking client. More than a few of us are long on the stock.