Investing early in mega-trends is a powerful way to generate wealth.

Let’s say, 10 years ago, you figured out there were a lot of 45-year-old’s still playing sports, you could’ve invested in U.S Physical Therapy (USPH.NASDAQ) for a gain of 600%.

Or if you’d noticed a tsunami of elderly people entering institutional care, Acadia Healthcare (ACHC.NASDAQ) would’ve provided a gain of 800%.

Or maybe it suddenly dawned on you that electric cars were going to be a “thing”, Tesla is up 1,700% in the last decade.

Today, we are going to talk about another mega-trend which is still in its infancy.

The company we are going to talk about doesn’t make fighter jets or bullets, or smart-bombs.

But typically the enemy here is not an army – it is gaggle of unemployed, under-sexed young men with automatic weapons.

The general level of bombast, blindness and stupidity around the issue of terrorism is an important part of this investment opportunity.

Snap Quiz: which is more likely to to save lives in the fight against terrorism? 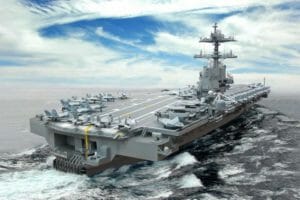 Or Exhibit B: a $39 fruit basket featuring grapes, oranges, apples and bananas? 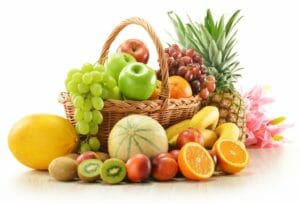 Neither the aircraft-carrier nor the fruit basket is going to prevent a single terrorism-related death.

(Although to be fair – the USS Gerald Ford will attract fewer flies.)

Let’s go back to those angry armed young men. How can we stop them murdering innocent people?

A small Canadian company has an answer to that question.

Patriot One (PAT.V) has developed “Cognitive Microwave Radar” that detects concealed weapons from a compact piece of hardware that can be embedded in a wall cavities.

Patriot One’s NForce CMR1000 is an innovative technology “Designed for cost-effective deployment in weapon-restricted buildings and facilities. The hardware can be installed in hallways and doorways to covertly identify weapons and to alert security of an active threat entering the premises.” 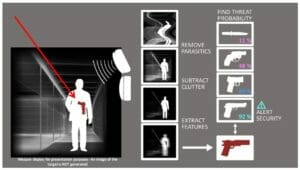 The Company’s motto Deter, Detect and Defend is based on the belief that widespread use of its technology will act as an effective deterrent, thereby diminishing the rise of active shooters across the globe.

And we’re not just talking about airports and nightclubs. There is a growing list of institutions that are trying to creating a weapons-free environments. 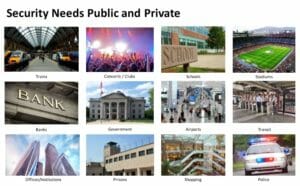 Universities, banks and schools are natural locations for discreet weapons-detection technology. It is not practical to bodily search hundreds of students or customers a day.

The PAT technology has the ability to scan in tight or wide spaces.

But in an environment where 51% of people are “actively worried about terrorism” – Patriot One is roaring out of the gate.

Although the prototype still smells like bubble-wrap, on June 13, 2017 Patriot One reported confirmed sales commitments of $2.7 million.

The PAT sales team is fanning out across the globe – talking to churches, universities, event centres, casinos, office buildings, hotels and government centres.

Deals have been signed in Canada, the US, the UK, and South Africa.

“We will begin shipments to end-user installations by Q4 of this year,” stated Patriot One President and CTO Dinesh Kandanchatha. “We have informed our supply chain partners of the accelerating demand, and I am confident that our scalable manufacturing processes will be well equipped to fulfil our orders.”

After a recent attack, ISIS released an official statement, imploring its followers to “attack infidels in their homes, their markets, their roads and their forums. Your targeting of the so-called innocents and civilians is beloved by us, so go forth and may you get a great reward.”

An aircraft-carrier isn’t going to protect against that kind of assault.

In fact, you are 200 times more likely to die in a vehicular accident, than a terrorist attack. But we can control how we drive.  We worry most about the things we can not control.

Like a swarm of angry young men with automatic weapons.

Terrorism is a mega-trend.

Never again, will we see two well-dressed armies charging at each other on the plains.

Patriot One has a real product that can save lives in a modern war.

FULL DISCLOSURE: Patriot One used to be a marketing client.  We still believe in them.