Ever get the feeling there’s some sort of Star Chamber whereby the Gnomes of Zürich meet several times a year to decide the fate of commodities?

“Alright, Gentleman – this quarter we’re going to kneecap Gold and allow Copper to soar. Corn will not be allowed to trade below $2 per bushel for the remainder of the year and the high for the Yen has likely been exceeded for the foreseeable future.”

“Oh, and don’t forget to collect your copy of the upcoming OPEC report on the way out.” 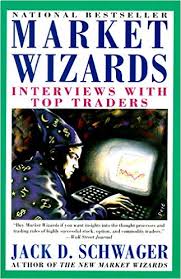 Let’s step into the DeLorean, set the dial for January 1980, and punch it to 88mph. The price of gold (POG) had just broken through the USD 800 barrier.

The screens on trading desks across New York were lighting up as the bull market that took of in the late 1970s had well and truly gone parabolic.

He was able to buy gold in Australia, wait for Hong Kong and London to push the price up and then offload it when NY trading opened for sizable profits.

They were nice profits, but nothing like the time he heard about the invasion of Afghanistan on the TV news and called Hong Kong to see if anybody knew about it? They didn’t seem to, as he noted the price wasn’t moving.

The last time he visited HK he was advised not to visit the gold floor1.

Remember this was before the internet folks.

Fast forward to late 2011. Gold was testing the dizzy heights of USD 2000 and you couldn’t own enough of the stuff. One kilogram gold bars (roughly equivalent to 32 troy ounces) were highly sought after as door stoppers for the well-heeled.

Where is it now?

A safe haven, of sorts 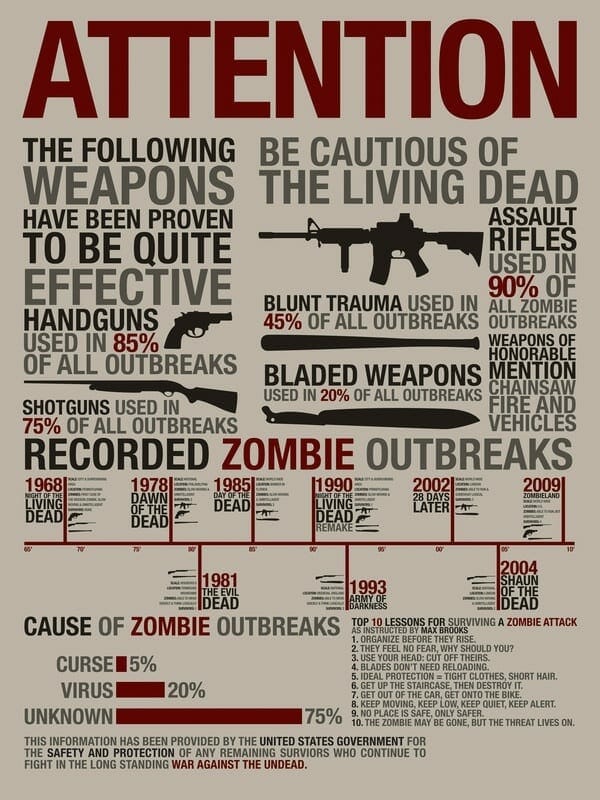 Gold has typically been seen as a safe-haven asset, offering protection against tail risk (when the shit hits the fan and really bad things happen).

In theory, you need a decent stash of gold so when society collapses and zombies roam the streets you’ll be able to exchange it for something more useful such as an assault rifle or flamethrower.

And when the food runs out – good luck swapping your Picasso for a few tins of beans!

Ok, so that’s probably an exaggeration. Economics undergrads will tell you that gold is a hedge against inflation. As the purchasing power of fiat money collapses, gold should help you weather that storm right?

“Gold is sort of the hedge against the system, the status quo. Our society is ingrained with the current monetary system of fiat money, where governments issue it, they can put out as much of it as they want. Today’s money system, in a very rude way, it’s no different to airline miles or hotel reward points.” – BusinessInsider

A war in the middle east? Up went gold. Governments looking likely to default on bond payments? A spike in gold. You get the picture.

In other words, the worse things look, the better it gets for gold.

At least, that used to be the case.

The big question now is – does that still hold true?

What are the pros and cons of hoarding the yellow metal:

On that first point, it’s worth noting that it’s getting harder to find and costing mining companies more to rip it out of the ground

“Barrick Gold (ABX) didn’t try to mine gold at 15,000 feet in the Andes, where freezing water is a major problem, because they like the fresh air.” – Mad Hedge Fund Trader

We’ll take him at his word that the tires on those heavy dump trucks now cost $200,000 each.

When Brexit got across the line, unexpectedly, gold shot up 100 bucks in a session. It was a surprise, and no doubt painful to anyone short. Having just walked into a hotel in Beijing, it was a relief not to have any position on.

It’s been slim pickings since then for bulls, however, with gold failing to hold above the psychologically important $1300 level.

Gold shorts have had it too good for far too long now. Rest assured that when the turn comes it will be violent and shake a lot of them out in quick order.

Will the real gold bugs please stand up 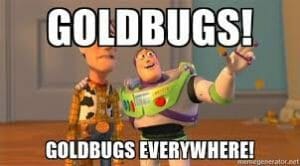 You can be guaranteed that almost every other week a headline will pop up claiming that The stars have aligned for gold bugs or It’s golds time to shine.

Yet the POG keeps dropping, sliding further down the slope of hope. Right now, there’s a lot of interest in its attempt to overcome a trend line which has held it back over the past few years.

Can the shiny metal do it? A break out instead of a fake-out, like we have seen time and time again since that lofty 2011 high. 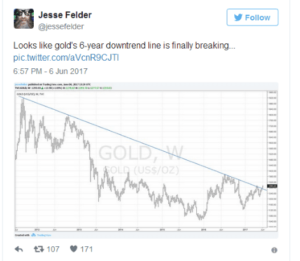 Gold bugs (a term frequently employed in the financial sector and among economists in reference to persons who are extremely bullish on the commodity gold as an investment and or a standard for measuring wealth2) are convinced, of course, that this time is different.

The recent price action has them salivating with a grin from ear to ear as they pour over their charts nightly. A moving average here, a reverse head-and-shoulders pattern there.

As any committed gold bug knows, the key is to ignore any information that runs counter to your opinion – known as confirmation bias.

If it does indeed break out, then gold stocks will take off with it. When gold comes back, it’s party time

Junior miners an excellent way to play the next upswing

Equity.Guru columnist Lukas Kane, in his recent article Debt crisis grows: buy real-estate, art or gold made a good case for having some in your back pocket, in the form of shares in junior gold miners.

Holding shares in gold producing companies becomes a highly levered way of gaining exposure to real “in the ground” assets.

In response to the article, an interesting question popped up in our comments section, by reader Jeff, asking Isn’t crypto currency the new gold?

That’s a good question Jeff – one the broader investment community have been pondering for some months. How does the rise of Bitcoin, which seems to have gained a degree of legitimacy, offset the need for gold as a safe-haven asset?

We don’t know – and nor does anyone else for that matter. Except maybe for the fact that it’s a lot easier for them to steal your bitcoins than it is your gold.

However, one thing that stands out right now, is that it just doesn’t seem cool to be investing in the barbarous relic3 anymore. Not with those new kids Cobalt and Lithium on the block.

Talking of junior miners, we suggest you keep your eyes on these four bad boys:

Sure we’re talking our book but why not!

These are stocks where we’ve already conducted a deep dive (saving you time) and as you should know by now, we tell it like it is, so you can make an informed decision as to whether you want to add a little, a lot or none at all to your portfolio.

As always, that’s your call.

The Beer/Gold ratio may hold a clue

It’s worth turning your attention to the beer/gold ratio, used by savvy investors for decades to time their gold purchases.

After all, beer is liquid gold, in anyone’s language. 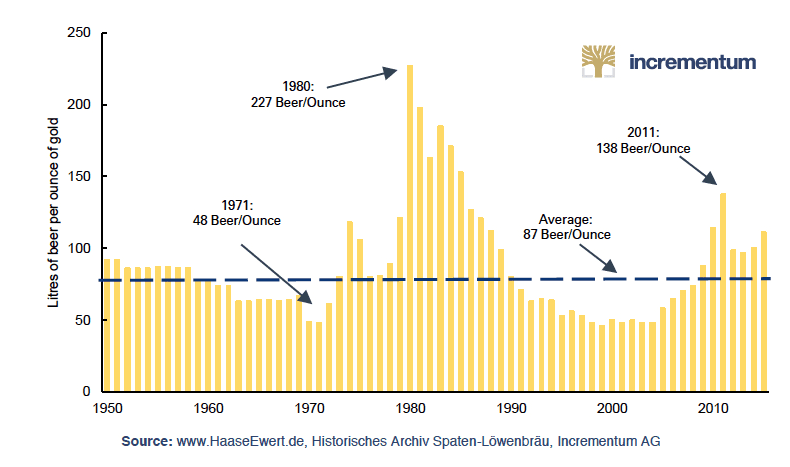 As can be seen on the chart above, the peak occurred in 1980 at 227 liters per ounce of gold when gold topped out at $850. Click here to read the full Incrementum report.

Trying to predict where the POG is headed next has now become a fool’s errand. It may however, lead to heavy drinking

In my adopted homeland, Thailand, gold is money.

Everyone from taxi drivers to go-go dancers will know the current POG, which is sold in weight by the baht (confusing as that is also the name of the Thai currency)

Households tend to convert cash to gold when times are good and then either pawn or sell the gold when there isn’t enough rice to feed the family anymore.

The wife insists we keep gold chains hidden in various places around the house. Which comes in handy when I need to flog some for beer money 🙂

1. The concept of a trading floor will be lost on Millenials – when open outcry was used to for price discovery. A relic of the past.
2. Wikipedia
3. Although attributed to Keynes, he was referencing the gold standard, not gold itself when using this term.

Sidenote: Although only being two degrees of seperation from Ed Seykota, it hasn’t helped my trading much