In 1979 a 160-pound teenager from a small town in Ontario entered the National Hockey League (NHL).  A respected scout predicted that he was “too small, slow and weak” to succeed in the NHL.  In his first 6 months in the league, playing for the Edmonton Oilers, he scored about 111 points.

It might be an exaggeration to call Canabo Medical (CMM.V) the Wayne Gretzky of junior cannabis companies – but like the “The Great One” – the company is defying naysayers and racking up points.

On June 5, 2017, CMM provided a corporate update on the company’s first 6 months since listing on the TSX-V Exchange.

Canabo’s stated business objective is to be “the dominant clinic network, research provider and data analytics source in the cannabis industry.” 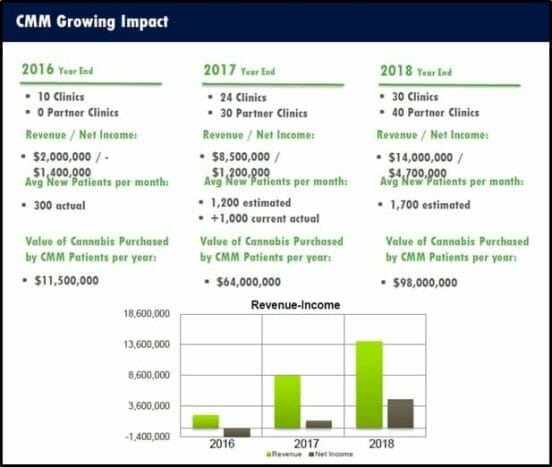 Collecting, processing and selling data can be lucrative. Many companies are now turning to data mining to help them ride emerging market trends and latch on to lucrative customers. Canabo is well positioned in this regard.

So how has Canabo’s rookie season been going? It’s a fair question.

Well – by any reasonable measure: the company is killing it.

In its first 6 months Canabo has:

“We are working with Terra Life Sciences to develop new cannabinoid treatments,” stated Smith, “while securing agreements with our partners which will allow for future licensing revenues.”

“Our benzodiazepine study demonstrated that our physician and clinic network is ideally suited to complete meaningful medical research on cannabinoid treatments,” stated Smith.

“We are seeing encouraging growth in our Independent Medical Evaluations (IME) revenue stream,” stated Smith, “We are currently in discussions to become the preferred provider of medical marijuana IMEs for multiple clients.”

“In December, an $8.4 million financing was completed by Aphria Inc. at $1.40 per share,” stated Smith, “Canabo will not require additional equity financing for the foreseeable future.”

Is that enough?  Are you happy?

Has the market mispriced Canabo?

If you bought shares of Canabo in December, 2016 (the same time as Aphria), you probably aren’t happy.  This year, CMM shares have lost about half their value (sliding agonizingly from .89 to .38). 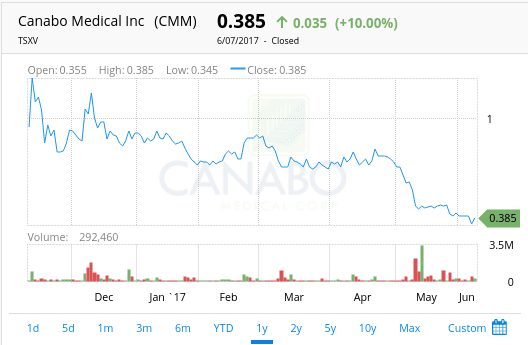 In the latest press release, CMM addressed that slide head on:

“Regarding the decline in Canabo’s share price in recent weeks,” states the press release, “management confirms that there is no fundamental reason for this decline. Canabo’s business is strong and growing, with volumes currently at record levels.”

Do you buy that?

Institutional investors are struggling to put a value on the cannabis usage data that CMM is accumulating.  In fact, we think this is a classic case of a mispriced stock.

Here’s the thing: by 2020, total cannabis usage in Canada is expected to be more than 700,000 kilograms a year.  According to Mackie Research, cannabis oil consumption in Canada will grow 198,000% in the next three years.

Yes, there’s gold in the ground. While other companies claw at the earth, Canabo is running airborne surveys, generating revenue and drawing maps to the treasure.

Gazing at the horizon, it seems possible that Canabo is the only company capable of predicting where the green puck is going next.

Without a doubt, it has been a good rookie season for Canabo.

FULL DISCLOSURE:  Canabo is an Equity Guru marketing client.  We are happy about that. Because we believe in this company.