The Rise and Rise of Bitcoin (BTC)

It’s a story that would baffle even Hercule Poirot. If Agatha Christie could still put pen to paper she’d no doubt title it The curious case of the 10 million dollar pizza.

Back in 2010, in Jacksonville Florida, an internet forum user by the name of Laszlo was hungry, and his thoughts turned to pizza – not the kind with weird fish toppings, just regular stuff like onions, peppers, sausage and mushrooms. Nothing out of the ordinary there, but what was unusual is that he didn’t want to pay in cash like regular folks. No sir! He had something a little different in his wallet and its name was Bitcoin (BTC).

It was a strange year, 2010. Lady Gaga wore a meat dress to the Video Music Awards, we were all madly playing Angry Birds and Mark Zuckerberg was TIME’s Person of the Year.

Back to the internet forum. A noob chimed in that the offer of 10,000 bitcoins was quite a bit and worth roughly forty bucks at the time. Was Laszlo of sound mind?

Within a few days another forum user, Jercos, a UK resident, had organized Papa Johns to deliver two supreme pizzas to satisfy Laszlo’s hunger pangs in exchange for his bitcoins, and thus the first ‘real world’ 1BTC transaction took place.

We don’t know if Jercos (real name: Jeremy Sturdivant) still has those coins, but if he does he’s sitting on a cool 20 million.

Quite possibly, the trade of a lifetime!

How did Laszlo feel about how things have played out? As he told the NY Times,

“It wasn’t like Bitcoins had any value back then, so the idea of trading them for a pizza was incredibly cool. No one knew it was going to get so big.” 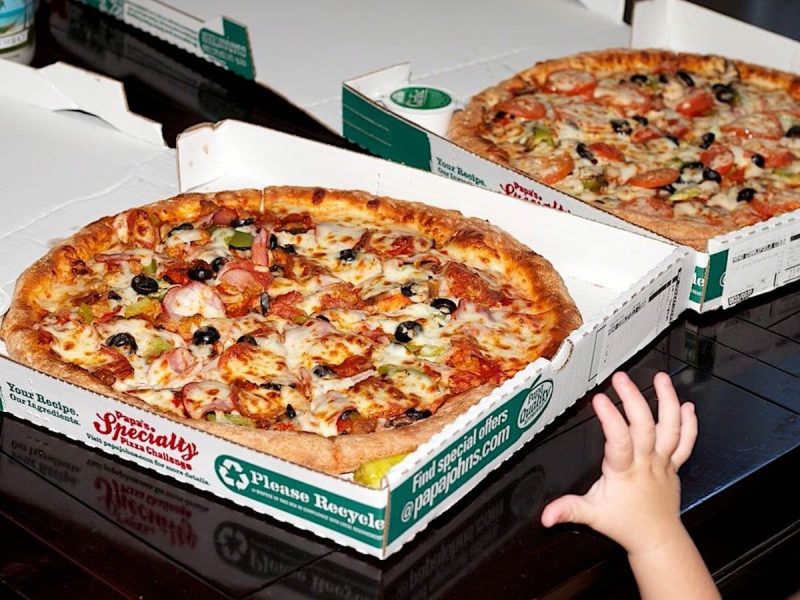 Never bite the hand that feeds you

A cryptocurrency is born

The birth of Bitcoin, back in 2009, was shrouded in secrecy until a few years ago, when Australian entrepreneur and computer scientist Craig Wright was revealed as the mysterious Satoshi Nakamoto – the probable creator of the cryptocurrency. Yet there are those3 who refute this and Wright himself has said that he does not intend to add anything further to the conversation, so we may never know.

Some mysteries are never meant to be solved.

As Business Insider recently reported, this thing has gone nuclear.

Known as a crypto or digital currency it’s effectively a file that sits on your disk drive, somewhere between those PDF’s you downloaded and the spreadsheet your boss wanted you to go over yesterday.

Actually, that’s not true. But it sounds good, doesn’t it? Over to Ken Shirriff, who seems to know a little bit more on the subject than yours truly.

As he explains it, “bitcoins consist of entries in a distributed database that keeps track of the ownership of bitcoins. Unlike a bank, bitcoins are not tied to users or accounts. Instead, bitcoins are owned by a Bitcoin address”

OK, so what’s a bitcoin address?

Forget all that stuff!

The all important part is your private-key, which is required when a bitcoin transaction is finalized, and if lost, means your bitcoins are gone. As many have discovered to their peril.

Editors Note: This is where the crypto part comes in ; short for cryptography which relies on the use of a public key, available to anyone and a private key, which only you hold. The private key is used to encrypt a plain-text message into a coded message (aka ciphertext) and the public key is used to decrypt the ciphertext back into plain text 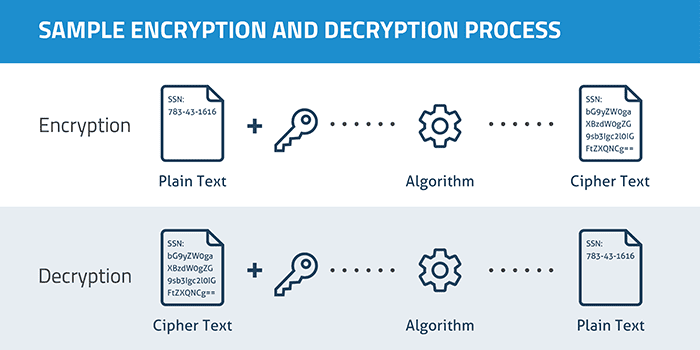 To add further confusion, it’s possible to mine bitcoins. Think free money if you have massive computational power, and are able to solve a pointless mathematical problem. We’ll save that for another time. 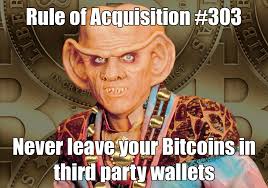 Where do you store your bitcoins? Why in a wallet of course – need you ask?

In reality, they would be much safer under the bed. There was far less piracy on the high seas than has taken place in the realm of Bitcoin.

And you thought buying stocks was difficult.

Silk Road and the dark web gives rise to BTC

Dread Pirate Roberts was the colorful handle of Ross Ulbricht who operated Silk Road, a website on the dark web which was an illegal marketplace for all manner of illicit substances. 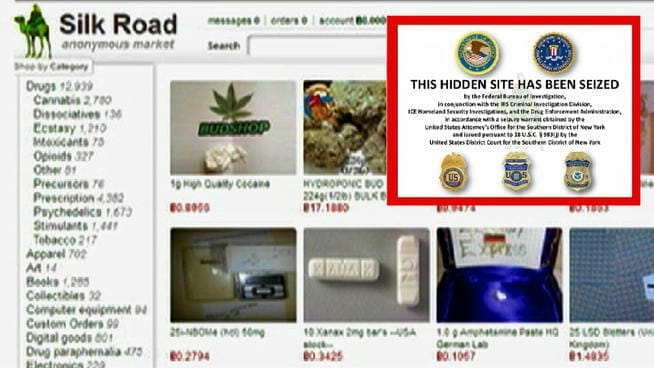 I was only there for the computer equipment, I swear!
According to Wikipedia, in March 2013, the site had 10,000 products for sale by vendors, 70% of which were drugs.

What does this have to do with BTC? It was the only currency available in which to transact. Your PayPal account wasn’t of much use when you wanted to purchase some pingers for that upcoming late night Rave. (or worse! – here at Equity Guru all we need is a strong cappuccino to keep us going.) 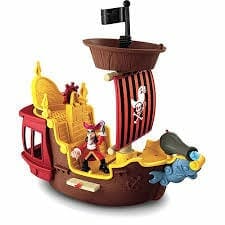 Things were going swimmingly for Ulbricht until the FBI tracked him down and seized his 144,000 bitcoins, worth $28.5 million. Ouch!

As reported by Bitcoin magazine, he seems to be keeping himself busy with yoga and ping-pong after being sentenced to life in prison.

Show me the money!

The hard part, in the early years, was converting your BTC into cash – After all, you can only eat so many pizzas.

To do so you needed the services of an exchange, some heavy duty Rosary beads and a stiff brandy.

Mt Gox, domiciled in Tokyo, Japan, became the place to go when you wanted to cash in your coins. By April 2013 the site had grown to handle 70% of the world’s bitcoin trades.

But BTC was never designed with regulation in mind, and pirates need to defend themselves from other pirates. You know how this story ends, right? 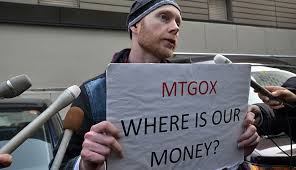 Mt Gox imploded in 2014 after its virtual vault was raided. The price of BTC plunged. (Turned out to be a great buying opportunity!)

The story doesn’t end there though, as now some hedge funds are buying up claims from Mt Gox investors whose BTC vanished into thin air, in the hope of turning a profit through the Tokyo courts5.

Thankfully those days are long gone.

Now there’s a pretty good chance of turning your coins into cash, due to the many BTC exchanges on offer, and Coinbase is one of the better known ones, servicing the US market.

Remember the Winkelvii from The Social Network? With the price of BTC going the way it is, they may well have the last laugh over Zuckerberg. If they can ever get their Bitcoin ETF going, that is.

Were you ever lucky enough to own any BTC and make a killing? We’d love to hear your story.

The History of Bitcoin – A brief timeline4

Did we mention that BTC vending machines have become a thing? Like, really. 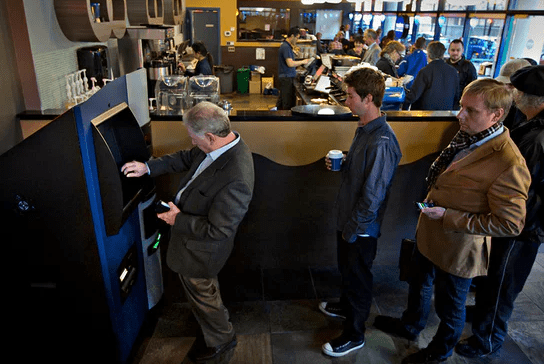 Customers line-up to use the world’s first ever permanent bitcoin ATM at a coffee shop in Vancouver, British Columbia.2

Blockchain – One currency to rule them all

A year ago we fingered BTC as being, quite probably, the Tulip mania of our day. It hasn’t let us down and has now gone parabolic.

Forget Cobalt, weed stocks and BRE-X. BTC has left them all in its wake in terms of ROI.

But you had to be pretty geeky to make any money out of it as it wasn’t a mainstream investment opportunity.

So in some ways, this article is purely academic. We’re merely sitting in front of the TV with a bucket of popcorn by our side, watching just how crazy markets can be as they push any sensible notion of rationality aside.

There’s no way we would recommend anyone invest in Bitcoin.

But there is an investment opportunity on the horizon, and its name is Blockchain. 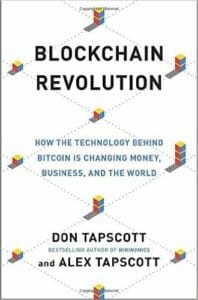 In that same article a year back, we told you to keep a close eye on Blockchain, which is THE game changer.

Alex Tapscott, the co-author of the book Blockchain Revolution recently gave the opening keynote on day two of DES 2017

He argued that Blockchain will disempower banks, make the energy grid far more efficient, fix the music industry, and save journalism.

It’s not as crazy as it sounds. Trust us.

Make no mistake, a lot of work still needs to be done to make Blockchain a technology that will be used by average citizens. Using it today often involves jumping through a lot of very technical hoops. And it likely won’t be Blockchain itself, but the services built on top of it that will become household names in the years to come.