There are 54 publicly-traded companies in the Cannabis Stock Index – a virtual portfolio managed by 420 Investor.  How much bandwidth do you have?  You need a big brain to differentiate the business objectives of 54 different companies.

But a few of these cannabis companies do stand out.

One of those is Invictus MD (IMH.V).  In fact it stands out like an orthodox rabbi bellying up to the bar at a Bangkok strip club.  Here’s one freakish thing IMH did: handed out a $1 million dividend to shareholders.

Invictus MD represents a platform of Canadian licensed cannabis producers focused on high-quality medical-grade marijuana.  The company has 250 acres of production capacity, operating under the Access to Cannabis for Medical Purposes Regulations (ACMPR). 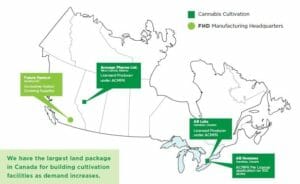 There are numerous reasons investors are flocking to Invictus, and we’ll get into some them later, but let’s look first at what happened on May 24th, 2017.

A total of about 18 million units were issued at a price of $1.35 per unit.  Each unit comes with a half-warrant – exercisable for $1.75 until November 24, 2018. (If the share price goes above $1.75, the underwriters can purchase more shares later at sub-market prices).

Often, when a publicly traded company raises money, a brokerage firm will try to sell shares to its own clients (retail and institutional investors).  If they fail, the client company won’t receive the funds and the brokerage firm will lose finders fees.

In a “bought deal” financial institutions step forward and purchase the whole offering before the retail investors can get in.  It indicates a high degree of confidence in the future share price of the client company.

In Q1 2017, Canaccord Genuity had revenue of $260 million, generating earnings of $23 million.  Does the presence of Canaccord de-risk Invictus completely?  No.  But here’s the difference between you and a Canaccord broker.  You probably (hopefully) have a life.  I don’t know: kids, a hobby, a drug habit…a passion.

If you lose money, there is a high likelihood that your spouse will still love you.  Canaccord doesn’t have a spouse.  When the sun goes down, it lights a scented candle and sips sherry alone in the bathtub.

If Canaccord loses money, no-one will love it.  So the fact that they participated in this $25 million “bought deal” financing has significance to IMH’s existing and future shareholders.

Let’s try to figure out why Invictus, a $55 million cannabis company, is attracting institutional money.  The big story here is demand growth:  by 2020, total cannabis usage in Canada is expected to be more than 700,000 kilograms a year.

Invictus is positioned to meet that demand.   They don’t have a lot of fancy side projects.  That is the highway they are driving on.

On April 26, IMH announced that it has acquired 100% of the shares of Acreage Pharms a licensed producer of Cannabis under the Access to Cannabis for Medicinal Purposes Regulations (“ACMPR”).

“We now have 250 acres of cultivation space that stretches from Alberta to Ontario,” stated CEO Dan Kriznic, “Acreage Pharms will benefit from a low cost of production as a result of low energy and water costs. Additionally, the property is friendly to building as many square feet as required based on the significant demand, which Deloitte reports to be between $4.9 billion and $8.7 billion annually.” 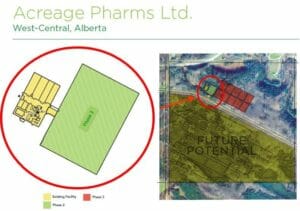 With only 43 producers licensed by Health Canada thus far, there’s a lot of opportunity for Invictus MD to meet this growth demand.  Typically with micro-cap companies, there’s a gap between desire and ability.  With institutional investors handing you cheques for $25 million, that gap shrinks.

IMH is building a production profile that looks like this:

Kriznic has communicated his intention to grow production capacity under current Canadian laws that would allow IMH to get a stranglehold on the future recreational market.

“This is the key driver to increasing shareholder value”, stated Kriznic, “We will make key capital investments that enable us to rapidly ramp up production capability.”

Please conduct due diligence on all of them, but keep an eye on the companies that are attracting institutional money, like Invictus (IMH.V).

FULL DISCLOSURE:  Invictus is an Equity Guru marketing client.  We own stock and we talk about them – because we think they are going to be profitable.