Big news as Google’s AlphaGo defeated the world’s number one Go player, Ke Jie. Yesterday’s win was the second for AlphaGo, built by researchers at Google’s DeepMind Lab. It’s hard to believe that just 12 years ago, the idea of using artificial neural networks to teach computers like we teach children was considered fringe fairy tale science. But thanks to Mel Silverman and a momentous meeting of minds at Vancouver’s Metropolitan Hotel, funding was released by the Canadian Institute for Advanced Research (CIFAR) and a decade of ground-breaking research began.

Canadians continue to make massive contributions to science. Our illustrious track record includes the discovery of insulin, invention of the CCD chip, computerized weather forecasting systems, Canadarm, plate tectonic theory, discovery of stem cells and elucidation of the geometry of higher dimensions. That’s just a portion of what we’ve added to the human experience and the innovation continues.

In fact, there is a company operating in Burnaby, British Columbia, that is leading the world in commercial quantum computing. We are reaching a ceiling with classical computing and according to a report released by the Semiconductor Industry Association, if things continue as they are, we will no longer be able to power all of the machines we have put in place around the globe by 2040.

Computing needs to become exponentially more efficient while being able to store and process massive amounts of data. In classical computing, the world is linear and binary – either 1 or 0. Quantum computing opens a door to a whole new paradigm. A qubit or quantum bit can exist in two states, but because qubits can also exist as any superposition of 0 or 1 and then can have entangled states, the amount of data they are able to hold dwarves classical bit computing. 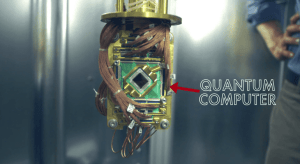 Last year, researchers from both Nasa and Google determined that the D-Wave quantum computer sizzled past a conventional computer – 100 million times faster at a fraction of the energy currently required by conventional computing. The challenge is not so much scaling the technology for commercial use as D-Wave has led the world in doing, but it will be defining real world problems with quantum language. The final horizon will be crafting the most accurate and efficient question for qubits to wrap around.

That said, we are well on our way and commercial quantum computers are expected to be readily available within the next five to ten years. Right now, the market is pretty small as only corporate and government giants such as Google and Nasa are able to find good reason to shell out the $15.0 million it takes to bring one of the D-Wave systems home. The 2000Q system takes up about 70 square feet of space and operates near absolute zero, basically a walk-in freezer 180 times colder than interstellar space. And don’t forget the magnetic shielding for the Quantum Processing Unit or QPU which achieves fields of 1 nanotesla or 50,000 times less than the Earth’s magnetic field. Not something you’re going to buy for your nephew to play video games on.

The technology is improving however and Google predicts it will have a 50-qubit quantum computing system within a year. It is not completely out of the question to expect 100,000-qubit systems within the next ten years which will revolutionize medicine, astrophysics, and any field that requires the collation and crunching of massive disparate data sets.

D-Wave continues to innovate, but will they continue to lead the way once Google, IBM, and Microsoft have had their kick at it? You could argue that D-Wave’s size will give them the ability to dance and adapt as the market evolves. It’s continuing innovation within the industry allowed the company to close a US$21.0 million financing round last year. The financing was led by Fidelity Investments which had $2.13 trillion of assets undermanagement in 2016. 2017 is expected to be a break out year for D-Wave.

So where does this leave you as an investor, after all, the company isn’t public yet and by the time it hits the market, the majority of the money will already be made. You can get in on this now in an indirect manner. According to the Nanalyze website, Harris and Harris Group have a substantial holding in D-Wave and continue to build on it. So you can invest in (TINY:NASDAQ) and grab a piece. You can also get involved by buying into the Pender Growth Fund (PTF.V) which as of the writing of the article gave investors a 15.7% exposure to D-Wave.

The industry is still nascent at best, but the potential is beyond anything we can comprehend and getting in on what’s going to be another revolution could create another generation of Elon Musks. I will be keeping my eye on this one.