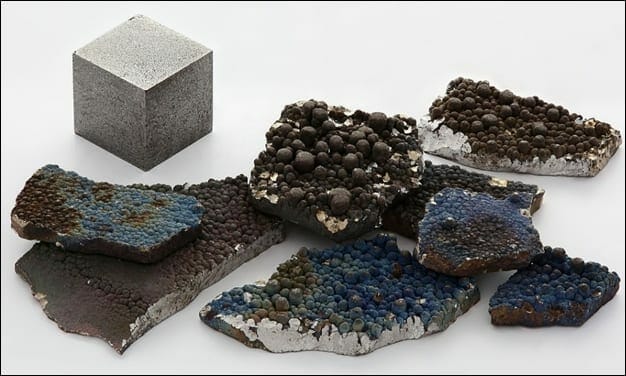 The spot price of manganese has been climbing steadily for a year. 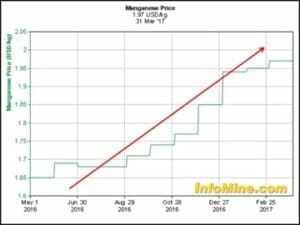 Manganese demand is surging because of a recent innovation in the way lithium-ion batteries are made.

You may have heard: lithium-ion battery demand drivers have a tailwind.  Actually, it’s a hurricane. In 2016, Electric Vehicles sales grew by about 60 % worldwide. Solar panels have a similar annual growth curve at around 50%.

Both of these devices use lithium-ion batteries which are vulnerable to overheating and expensive to manufacture.

A brigade of scientists around the world is attempting to develop alternative systems: bio-electrochemical, redox flow, graphene supercapacitors.

The only market-ready technology is a steam accumulator which requires carrying 40 gallons of boiling water in the trunk of your car.

So the question in 2017 is not, how to replace the lithium-ion battery, but how to improve it.

Currently, one of the biggest improvements is the use of manganese in cathode materials.  The cathode is the battery’s negatively charged electrode (typically painted black with a “negative sign” on it).  Lithium Nickel Manganese Cobalt Oxide (NMC) cathodes are made of nickel, manganese and cobalt. 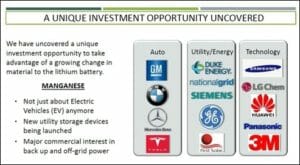 The Green Car Congress has stated that NMC cathodes have improved power balance and thermal stability at a lower cost to conventional cathodes. The NMC cathode materials can be customised for different applications: from power tools to high-power electric vehicles. 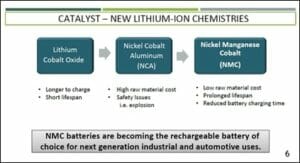 On May 11, 2017 Manganese X (MN.V) announced that it had received the results of an electrolytic manganese dioxide (EMD) concept study relating to its 896 hectare property located in Carlton County, New Brunswick.

“We now have a detailed roadmap to create Canada’s first high-grade manganese product,” stated MN CEO Martin Kepman, “Our strategic location is only 10 km from the US border. We also have access to major rail lines, making us an obvious potential supplier to the lithium ion battery market.”

Manganese has the following demand drivers:

The MN Manganese deposits are about 5 km northwest of the town of Woodstock and are easily accessible from the Trans-Canada highway via all-weather roads.

Drilling was completed over a 1.8 km strike length of the prospective manganese occurrence trend.

Conclusions from the Drill Program

MN is also in discussions with the National Research Council of Canada towards testing the manganese for commercial acceptability.

MN is eye-balling a low-cost open-pit manganese mine in Canada.  There are currently no operating manganese mines in North America.   Most of the supply comes from China and Africa – which brings political risks, tariffs, and transportation costs.

Manganese X is focused on supplying product into a very hungry market.  Keep your eye on the lab tests and the follow up on the concept design.  So far, the company has been hitting its milestones, methodically removing obstacles to production.

The stock is currently trading at .12 with a market cap of $5.4 million.