Nervous chatter in newsgroups was evident over the past few weeks as the much anticipated listing of the newest ASX weed stock drew closer. It would prove to be a litmus test of the sector in general as all pot stocks have been clipped over the past month in line with their global peers.

The big question – Had the bubble burst or were investors merely taking a breather after the heady gains already recorded?

It seems the latter, as The Hydroponics Company (THC.ASX) swaggered onto the scene at mid-day today, hitting the boards at a healthy 33 cents, 65% above the 20 cent issue price.

May the 4th be with you

The IPO was heavily oversubscribed (3x) which usually results in a scale-back depending on where you are in the pecking order. It always pays to know your broker’s favorite single malt whiskey.

As a sweetener, free options were issued on a 1:2 basis against shares, meaning if you received 20,000 shares you picked up 10,000 options at no extra cost. The options trade under the ticker THCO.ASX.

Who says there’s no such thing as free money?

Editors Note: While warrants are commonly used in the North American markets, in Australia company options (calls, long only) are issued as a sweetener, and trade in the same market as the ordinary shares. They are attractive to speculators, particularly when they are in the money1 as they allow exposure to the stock for a fraction of the price and, being long dated, do not suffer the ravages of time decay.

Anyone looking to build a position in the stock could also use the options rather than buying the shares outright, which lowers their overall risk and allows them to take advantage of any mispricing in the secondary market8.

NB: Unlike Exchange Traded Options, market makers are absent and the options trade purely on an open market i.e. Best Bid and Offer. 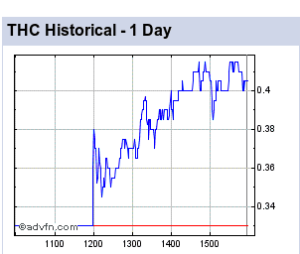 While a few Nervous Nellies dumped their holdings in the first 5 minutes, there was a distinct lack of selling as the day progressed. Once it had hit $0.40, shareholders were high-fiving each other on the double-up.

With 25.8 million shares changing hands today, anyone who wanted a piece of the action had a decent chance at getting their fill.

Despite being pushed around by day-traders, bots and would-be investors, the stock traded confidently during it’s first 4 hours as a public company. When the closing bell rang, the Twitterverse was awash with back slapping for all involved in getting the IPO across the line. And why not. Looks like a job well done, from our vantage point.

Is this an attractive cannabis play? Let’s thumb through the prospectus to get a feel for what’s going on and try to give you an answer.

Core business units will include:

Hamish MacDonald, CEO, commented: “We have a highly experienced team of experts in place and our strategy to increase annualized revenues from more than $5 million in 2017 to more than $15 million by 2018 reflects the aggressive growth we anticipate over the next 12-24 months as we position THC as a leading cannabis company with multiple revenue streams.”

They will start life with positive cash-flow, thanks to the ‘flagship’ acquisitions of Canadian based Crystal Mountain Products and Dragon Vision Manufacturing (CMDV), which will instantly deliver 600 product lines, 9 established trademarks and 2 patents to the company.

According to the prospectus, CMDV has been operating profitably for the past 5+ years and distributes wholesale across North America and the UK. Being a privately held company, operating out of Edmonton, Alberta, the companies financials are not publicly available. We can only assume the auditor has made a reasonable fist of it in running the ruler over the financials provided in the offering document.

Additionally, the acquisition of Canndeo Limited, an Australian business offshoot of Agri Fibre Industries Pty Ltd, has been undertaken to allow them to establish a foothold in the CBD space. Worth noting that the company needs to obtain a number of different operating licenses before they can even think of bringing any products to market, lagging a number of their peers.

Don’t expect too much on this front to change in the next twelve months.

A few exclusive marketing agreements (with Inna Water and Supa-Stelth hydroponic pumps) and a binding MOU with A&B Hydroponics round out the offering.

You’re getting a turnkey solution in the growing and services space with ambitions to enter the CBD market.

The IPO came in at the top end of the range, and raised AUD 8 million, that equates to 40 million shares being offered to the public, and the capital structure looks like this:

Insiders still hold ~75% of the float. Everyone else should consider themselves to be a minority shareholder.

Stags were the big winners today, especially with the inclusion of the free oppies that vested immediately. It’s worth repeating that the most money gets made by the fewest people in the shortest amount of time. A solid market maxim.

Is it a value play at current prices, with a market cap of $34 million?

Maybe – If you take a suck on the hype pipe that valuation doesn’t seem too bad, especially compared to some of it’s peers. Good chance it will run further, but just how much is anyone’s guess.

Longer term we’re not so sure.

Expect the industry to become fragmented as new entrants arrive on the scene, especially given that the barriers-to-entry are low.

Relying on the CMDV acquisition to fund the company’s growth is a clear risk. Retail is tricky, in that if a Goliath like Amazon.com (AMZN:NASD) decides to come and eat your lunch, you’re done.

The listing smells a little opportunistic to us. The company itself was only incorporated last year expressly for the purpose of facilitating the IPO. It doesn’t hurt that the ASX is trading within spitting distance of a multi-year high. Always good to have the wind at your back, so to speak.

If you’re keen we suggest you wait for the dust to settle and nervous longs to exit before pouncing.

Never chase price. Like a bus, the next opportunity in the market is always just around the corner.

Disclosure: No positions held in above mentioned securities. (THC.ASX ; THCO.ASX). The Hydroponics Company is not an Equity.Guru client.