You have to have a thick skin when you’re in the stock analysis game. any time you say nice things about a company, you get people accusing you of being a ‘pumper.’ Say negative things, no matter how well sourced, and they’ll accuse you of being a ‘dumper’.

The story was, Imagination Park (IP.C), long a stumbly bumbly company that couldn’t get anything right, had suddenly ten-bagged it over a few days on a bunch of hyped out news releases that, when we pressed on them, tended to deflate quickly.

We don’t tell people to buy or sell at Equity.Guru, but when we see a cruise ship running full tilt towards a rocky outcrop, we feel it’s our duty to wave a red flag or two, and this ship has a hole in its bow, it’s on fire, there’s a brick on the gas pedal, and the Captain is shittered on negronis on the Lido Deck.

“With over 50 billion page views per month and more than 200 distribution channels, it is one of the largest content sites globally,” said the company. In the deal, Imagination Park is to provide virtual reality content and short films to Ohmore Media, which will share advertising revenue 50/50 with Imagination Park as part of its deal with Ergeng.

Here’s where the dumb grows large. Ohmore Media is not a thing. Go ahead and Google it. The only thing you’ll find that doesn’t involve IP’s news release is a single LinkedIn profile of a guy in Richmond BC who says he’s a social media coordinator and a couple of job postings.

Ergeng Network exists, but it’s not what IP said it was. It’s certainly not ‘China’s largest media platform’ (as it says in the headline of the IP news release), nor the largest ‘new media platform’, nor the largest new ‘media platform’ (as is said in the release proper) – however you try to fuck with the wording of that statement, it’s false. It’s a straight lie. In fact, the company itself says it “is committed to building China’s largest platform type video content company.”

Of course, I’m also committed to making Charlize Theron call me ‘big stud’ through her ball-gag in the bedroom of our private yacht.

There were pages more of accusations in that piece but, suffice it to say, the number of phone calls I got from friends that included the word ball-gag over the days following would probably not surprise you.

The story was well read. We got more calls, more emails, more social media shares and, as it turns out, more clients, from that story than from any we had published previously.

Also, more abuse. Fans of IP were not happy as their stock halved, and I got called both a pumper and a dumper for my part in it.

Some thought I was part of some huge conspiracy to short the stock unfairly, and when I pointed out I actually owned low cost options in the company and was costing myself money by pointing out some of the dumb things management was doing, the accusation moved to my having a grudge against the company for whatever led to my getting the options.

Scratch that – you can.

When IP saw their stock plummet on the back of Equity.Guru’s ongoing coverage of overhyped news releases, and weirdly structured deals that seemed to unfairly enrich management at the company’s expense, and the insider selling that was going on days before a private placement was announced (a huge no-no), they could have reacted in any of several ways.

Instead, they reacted in all of them. They screamed that I was on the take, that our pieces were wrong, that they made a few mistakes but would be better in future, they shut down their PP, and then they tried the most outlandish, bizarre, unexpected tactic possible:

They opted for legitimacy.

A news release Friday corrected the traffic information for Ergeng Network, the Chinese media platform they had previously touted as ‘China’s largest.’ Gone was the 50 billion page views per month claimed earlier, replaced with 10 billion. Gone is the ‘partnership, replaced with a ‘non-exclusive association.’

There were admittedly still a few hyped statements that I don’t personally believe, but it was at least closer to a responsible, defensible news release than any seen at the company in recent memory.

The announcement of the Ohmore relationship, a non-exclusive association, relates to a Mainland China-wide license to broadcast original individually produced content on any of the 227 channels of Hangzhou Ergeng Network Technology Co., Ltd. (“Ergeng”) via Ohmore, which has an exclusive partnership with Ergeng.

Personally, I don’t think Ohmore has anything close to an exclusive partnership with Ergeng, but I also don’t really care. If you’re not trying to sell an affiliate deal on a Chinese video platform as the second coming of Youtube, I’ll stay out of your way.

The Michael Bisping VR series also got re-fashioned, played down from the earlier news release and re-set as a one day training camp shoot.

Michael Bisping, UFC Middleweight Champion of the World, has agreed to produce a VR Series entitled “A Day in the Life of the Champ.” Production starts next month commencing in Michael’s hometown of Los Angeles and will have exclusive access to his training camp and behind the scenes activities.

But the big news, the piece of information that gives me a little hope that IP might actually build something, one day, going forward, is the announcement the company would institute a blackout policy for directors and insiders regarding the sale of their stock.

The purpose of the Blackout Policy is to summarize the insider trading restrictions to which directors, officers and certain employees are subject under applicable securities legislation, and to set forth a policy governing investments in the securities of Imagination Park and the reporting thereof, which is consistent with applicable legislation. This Blackout Policy is not intended to discourage investment in the Company’s securities. Rather, it is intended to highlight the obligations and the restrictions imposed on insiders by relevant securities legislation.

It’s important to run a close read on this, because what the company is actually saying here is not that there will be special rules governing the sale of insider stock timed near big news – rather, they’re saying they’ll be teaching their directors what the actual rules are regarding insider trading.

That they have to do this at all tells you our initial accusations were both substantive and necessary. I’ll put it clearly – the insiders at Imagination Park breached insider trading legislation when they sold stock a few days before a private placement financing was announced. That one of them, Tim Marlowe, dumped stock for a week afterwards, all the way down to $0.32 (the financing was at $0.46), and waited til a week later to file his documentation, is a disgrace. That’s the sort of behaviour that can get a guy slapped with a massive fine, trading bans, and the company real trouble. 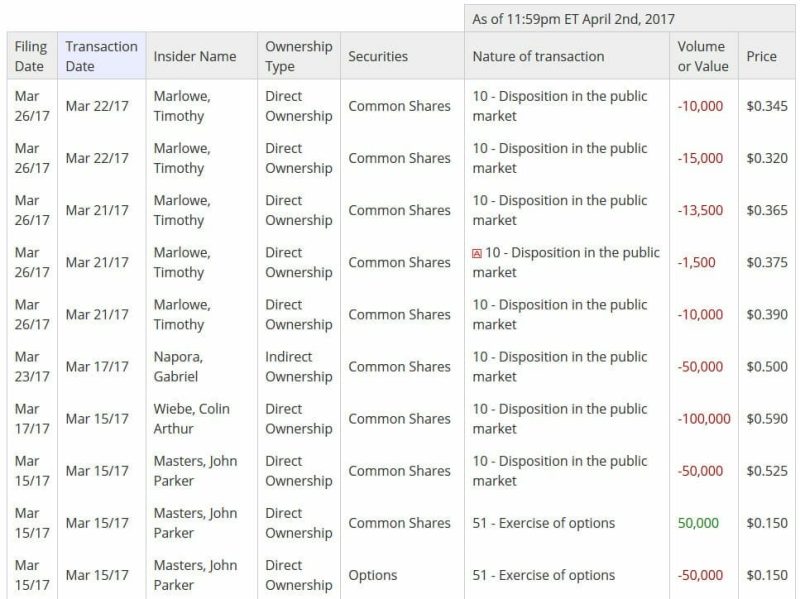 That’s the insider trading reports on IP, above.

You can see for yourself, there’s CEO Napora, then CFO Masters, Chairman Weibe, and director Marlowe, all burning paper. Note the discrepancies between when the sales went through and when they bothered to file. Masters, who just resigned as the interim money guy, is the only one who appears to understand the rules. Marlowe, frankly, is lucky to have dodged IIROC.

But – and I’m going to give credit where at least a little is due here – IP is putting it’s hands up with this news release, essentially admitting that the people running the company either ignored or just plain didn’t know that you can’t trade on inside knowledge, and stating for the record to investors one and all that they’re not going to allow that going forward.

Small victories. Personally, I’d like to see that insider stock committed to the company, if it’s got such great prospects going forward. To me, an exec stock lockup would make sense, especially in light of what’s happened recently. Show the people you’re in it for the long haul.

And, frankly, I still think the deals in place, where Napora and Marlowe have received company stock in return for a piece of their ‘net profits’ in future films, is a terrible one that should be looked over by a third party. I mean, if those profits are so huge (Hollywood accounting rarely sees any production register a net profit, which is why A-listers get a piece of the gross instead), why would Napora and Marlowe sell them?

And if they’re not huge, Napora and Marlowe have unfairly feathered their nests at the company’s expense.

But that’s another fight. Today, we’re celebrating the lesson being learned by Imagination Park execs that the stock can run on actual news that doesn’t lie, doesn’t inflate, and doesn’t overtly spin.

29% jump today, at the time of writing. On the least puffy news release the company has ever put out.

FULL DISCLOSURE: Charlize Theron doesn’t know who I am.