In this article I discuss a lithium (“Li”) junior, wealth minerals, that has successfully locked down, via option agreements, several key lithium properties/projects in Chile (management still looking for more) and owns or controls four precious/base metal projects in Mexico, Peru and Canada. Each of the company’s assets is good to very good, but my focus is on the crown jewel.

On March 17, Wealth Minerals (TSXV: WML) delivered a NI 43-101 Technical Report on its optioned Proyecto Atacama Lithium (“PAL”) project in the northern part of the Salar de Atacama (the “Salar”), located approximately 220 kilometres east of the Chilean city of Antofagasta. The Salar itself is the largest in Chile and third-largest in the world, measuring about 85 x 50 kilometres (4,250 square kilometres). The report represents an important milestone in the company’s early-stage Li exploration activities (see Corporate Presentation). 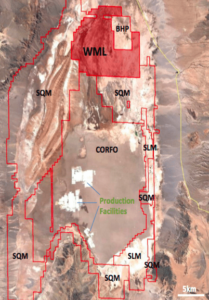 Wealth’s exclusive option on a 100 percent royalty-free Interest in, and to, the PAL project in Chile consists of 144 exploration mining concessions covering 46,200 hectares (about 114,160 acres = 462 square kilometres, or 178 square miles) in the northern part of the Salar. The PAL project abuts claims held by SQM (NYSE: SQM) and Albemarle Corp.’s (NYSE: ALB) subsidiary Rockwood Lithium, roughly 30 kilometres and 50 kilometres north, respectively, of those companies’ world-class operations. NOTE: 46,200 contiguous hectares is a huge land position, larger than that of any other (entire) salar in Chile. 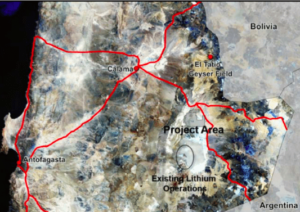 The principal origin of lithium is interpreted to be surface and subsurface lithium-bearing geothermal waters from the El Tatio Geyser Field situated north of the Salar, flowing south onto concessions controlled by Wealth Minerals Chile (WMC), then onto SQM’s/Albemarle’s concessions and production facilities. The chemistry of the brines in the south is said to be “almost identical” to that of the geothermal fluids of El Tatio, strongly suggesting those mobilized fluids are the main source of lithium and potassium (“K”) in the Salar. From the technical report, section 6.0, page 18:

“….because there’s been Li & potassium production from brines located in the southern part of the Salar, and because there has been significant development of deep water sources for nearby mining activities (copper mines Escondida & Zaldivar, among others), significant studies of the geology, hydrogeology and natural resources are available for the region. These regional studies have been carried out by several third-party private companies and by Chilean agencies. As well, numerous cooperative assessments of geology and hydrogeology have been carried out by international scientific agencies.” 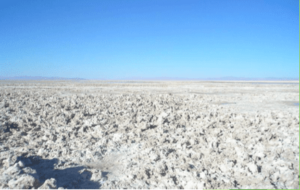 Whereas SQM and Albemarle are harvesting near-surface brines, WMC’s target zone is in subsurface aquifers several hundred metres deep (NOTE: The company’s goal is to identify similar brine chemistry at depth, as that of nearer-surface brines being extracted 30 to 50 kilometres to the south). There has been no exploration whatsoever for lithium on the northern part of the Salar, including the PAL project. WMC’s technical report offers 10 recommendations for a Phase 1 exploration program:

The above-mentioned steps are estimated to cost just $550,000. The report’s author concluded that although the PAL project is early-stage, exploration for lithium resources is warranted for the following reasons (section 1.0, page 5):

“1)  Lithium-rich brines produced in the northern part of the Salar flow to the south, across the PAL project.  2)  Sustained production of lithium, potassium & byproducts has occurred in the Salar since the 1970’s from properties contiguous to the PAL project.  3)  Regional and multidisciplinary studies by several companies and government agencies have confirmed the similarity of geology and hydrogeology of the northern and southern parts of the Salar.  4)  Although not necessarily an indication of brine potential, surface sampling of sediment & surface waters returned anomalous lithium concentrations.”

Who Will Survive the Inevitable Industry Shakeout?

Above is a comparison chart of well-known South American salars (NOTE: the metrics associated with “Salar de Atacama” are those of known producers SQM and Albemarle, but there has been no exploration on WMC’s concessions).

Wealth Minerals has locked up a very large block of contiguous exploration concessions in northern Chile, host to the undisputed lowest-cost lithium (brine, hard rock or clay) operations in the world. There are at least 18 publicly-listed, pre-production Li juniors with property or project interests in Argentina. There are just four, two of which – Bearing Resources (TSXV: BRZ) and Lithium Power Intl. (ASX: LPI) are partners on the same project – focusing on Chile. LiCo Energy (TSXV: LIC) is another junior in Chile with an option on exploitation concessions (plus it has significant Li assets in Nevada and promising cobalt assets in Canada). Both countries will be top 3 or 4 Li suppliers. The question is: which juniors will break into the ranks of SQM, Albemarle and FMC Corp. (NYSE: FMC) in South America’s Lithium Triangle?

There are several contending projects in Argentina, most notably Lithium America’s (TSX: LAC) and SQM’s joint venture Cauchari-Olarozproject in Jujuy Province and Galaxy Resources’ (ASX:GXY) Sal de Vida project in Salar del Hombre Muerto. As mentioned, the race is on among over a dozen other new entrants there. By contrast, if one believes as I do that new producer(s) will emerge in Chile, then Wealth Minerals’ PAL, Lithium Power’s/Bearing Resources’ Maricunga and LiCo Energy’s Purickuta (located in the same Salar de Atacama) projects are virtually the only games in town (among publicly-listed companies).

“The production method utilized by SQM and Rockwood is: lithium-containing brine is pumped out of the lithium-potassium-bearing brine aquifer into evaporation ponds, where it’s concentrated by evaporation. The brine is further purified on its way through the system by continued evaporation, when the brine is pumped through a cascade of ponds where impurities or by-products are crystallized and removed. Main by-products are potash for the fertilizer industry and bischofite used for road paving. During the evaporation process, the lithium concentration is increased from about 2,000 ppm to up to 60,000 ppm (6%) in the final brine. The final brine is transported to a processing plant for further purification and processing to yield lithium carbonate and lithium chloride.”

Of the three, the scale of Wealth Minerals’ flagship project really stands out at 46,200 hectares, (114,160 acres).  If the company is successful in identifying high-grade Li and K, with acceptable levels of deleterious elements, there would be the real possibility of a large production profile. That remains to be seen, there’s no proof (just theory) that Wealth’s optioned property contains potentially economic brines.

But the theory seems a good one for the reasons laid out in the NI 43-101 Technical Report.  Could there possibly be a better location on the planet to explore for concentrated Li-bearing brines?  To reiterate, the concessions are just 30 to 50 kilometres north of Albemarle and SQM’s operations (lowest cost in the world). Geologically speaking, in the context of aquifers, that distance is small.  Investors in Li juniors have likely already picked a few Argentina plays, but Chile should not be ignored. I believe that Wealth Minerals offers a compelling investment proposition, well worth readers’ further attention (see Corporate Presentation).

DISCLOSURES: The content of this article is for informational purposes only.  Readers fully understand and agree that nothing contained herein, written by Peter Epstein of Epstein Research, (ER) including but not limited to, commentary, opinions, views, assumptions, reported facts, estimates, calculations, etc. is to be considered, in any way whatsoever, implicit or explicit investment advice. Further, nothing contained herein is a recommendation or solicitation to buy or sell any security.  Mr. Epstein and ER are not responsible, under any circumstances whatsoever, for investment actions taken by a reader. Mr. Epstein and ER have never been, and are not currently, a registered or licensed financial/investment advisor, broker/dealer, stockbroker, trader, money manager, compliance or legal officer, and they do not perform market making activities. Mr. Epstein and (ER) are not directly employed by any company, group, organization, party or person. Shares of Wealth Minerals are highly speculative. Readers understand and agree that investments in small-cap stocks can result in a 100 percent loss of invested funds. It is assumed and agreed upon by readers that they consult with their own licensed or registered financial advisors before making investment decisions.

At the time this article was posted, Peter Epstein owned shares and/or stock options in Wealth Minerals and the company was a sponsor of ER. Readers understand and agree that they must conduct their own research, above and beyond reading this article. While the author believes he’s diligent in screening out companies that are unattractive investment opportunities, he cannot guarantee that his efforts will (or have been) successful. Mr. Epstein and ER are not responsible for any perceived or actual errors including, but not limited to, commentary, opinions, views, assumptions, reported facts and financial calculations, or for the completeness of this article. Mr. Epstein and ER are not expected or required to subsequently follow or cover events and news, or write about any particular company or topic. Mr. Epstein and ER are not experts in any company, industry sector or investment topic.