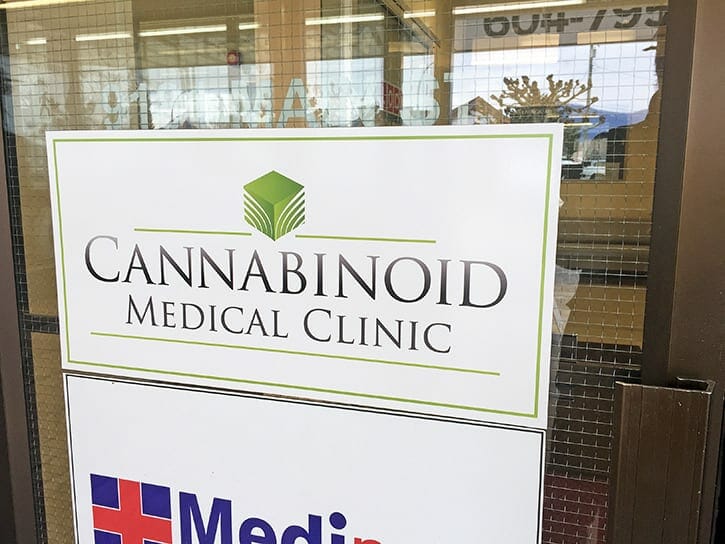 A few weeks back, Canabo Medical (CMM.V) faced a problem.

Giant Canadian weed player, Aphria (APH.V), which had invested heavily in the company at $1.40 per share, sold a chunk of stock at half that.

For investors, that was a tough discovery. It hadn’t followed bad news, at least not public news, and Aphria certainly doesn’t need the money. Canabo itself was at a loss to explain the situation and Aphria hadn’t explained the move to the market either.

That deal was made even more weird when it became clear the stock in question was restricted. That is, it was not tradeable. It should never have been allowed to go through.

Fat finger trade? Something more sinister? Was there trouble brewing at the CMM?

Nope. The opposite, in fact. This past week, Aphria bought the stock back (at a higher price), while Canabo announced its first BC cannabis medical clinic, taking the chain officially nationwide.

The Chilliwack-based operation finally brought the brand to the left coast proper, adding to clinics in New Brunswick, Nova Scotia, Newfoundland, two in Alberta, and nine in Ontario. The company says more are to follow, and though it’s said that before, it has always delivered on that promise within the month.

The most recent opening comes at St Catherines, Ontario, bringing the current tally of locations to 14, with plans to take that over 20 by the end of 2017.

Canabo’s business model is to provide Canadian doctors with referral options when patients want/need to be prescribed cannabis-based medications that a GP feels unable/unqualified to fulfill. With 2% of Canadian doctors currently admitting they prescribe cannabis, CMM sees this as a massive opportunity to corner the market in genuine medical marijuana business.

The second part of their business model is based around their patients’ medical records, which are sent along with the referral, and which allow the company (subsequent to permission given from the patient) to add that data to their 15,000 patient + database. That gives them ongoing efficacy data that is used to streamline the work done by their own doctors, and is sold to companies that have a need to access that dataset (such as employers, insurance companies, and licensed producers) for a subscription fee.

The share price reflects a lack of understanding by the market about what they do, how they do it, and the potential revenues from the ‘big data’ side of their enterprise. Whenever an academic study or clinical trial is done on marijuana currently, the sample sizes can be fairly small, and patient signup can be a lengthy ordeal.

Canabo, on the other hand, can simply consult their database for exacting demographic, symptom, and treatment data, to access (for example) women aged 18-35 who take birth control and have take sleep medication, and see exactly what works, how well it works, and whether there are any issues noted.

Increasingly, that story is coming together. Though there are other companies out there that have ‘pain clinics’ or ‘veterans clinics’ or ‘weed referral clinics’, most simply point a patient to an LP and take a referral fee, or send folks to a friendly dispensary to take their chances.

Canabo makes its money from the referral itself (like any walk-in clinic) – with the data model revenues being a happy bonus. Aphria didn’t buy the thing out of charity, and certainly saw the value of it, even at double the existing share price. They could have more easily (and cheaply) simply subscribed to the company’s data if that was their only interest, but as they have with CannaRoyalty (CRZ.C) and others, Aphria is interested in diversifying their investments into all areas of the weed world where it sees long term potential, either as a partner, or simply a nice little earner. 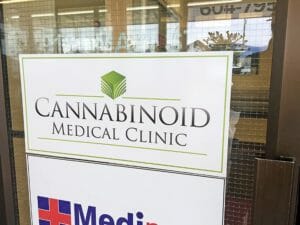 The company doesn’t have a storefront. There is no bud in jars. This is not the bong-and-bud style dispensary causing so much consternation in big cities and small towns across B.C.

“We are a very conservative model,” Philpott said. “Go low and slow.”

In fact, Philpott said at the 14 Cannabinoid Medical Clinics from Newfoundland to Alberta, cannabis is not even the first choice for their physicians. Synthetic cannabinoids such as nabilone are often a preferred starting point. Since 60 to 70 per cent of the cases they deal with are pain-focused, they tend to prescribe low-THC and high CBD products.

“Recreational users do not come see us,” Philpott said. “We don’t give them what they want.”

To get in the door, patients must get a referral from a family doctor. A referral form is available to download from the clinic’s website. Philpott said their clinics do all the follow-up care and provide a detailed report back to the referring doctor.

He added that Canabo is in fact primarily a research-based company, and they are currently amid a 7,500-patient study on medical marijuana and benzodiazepene use, the first phase of which is to be released at a conference on April 7.

This last paragraph is, in my opinion, ‘the hump’ that potential investors are looking to get past before they lock in on Canabo.

There are, as stated earlier, many competitors in the ‘I have pain, point me to some weed’ space, but a 7500 patient study that identifies REAL data about patients using benzos and switching to weed-based treatments is the sort of thing that can change the medical world completely.

When this paper is released, it will likely also be released to peer-reviewed medical journals, which is where such data needs to go for those 98% of doctors not yet prescribing marijuana to actually rethink their stance.

My own doctor doesn’t prescribe it because he says, ‘A) I don’t know what or how much to prescribe, B) I don’t know whether it will interfere with other meds or have side effects, and C) I have an already busy practice, and don’t want weedheads jamming my phones all day looking for a prescription.’

This paper will, in all likelihood, make a strong medical case to get patients off benzos (which everyone wants), but if you think that’s going to kill Canabo’s clinic business because suddenly every doctor is going to be pumping out scrips, that last point should disprove that notion.

Doctors don’t want a hundred guys calling looking for weed. But they can sure use someone to flip those people to.

I own Canabo stock and don’t even bother looking at its daily ups and downs, because it’s a keeper, in my opinion. Whether you and your daytrading pals get it, or care, is beside the point. I’m taking Aphria’s viewpoint on this: It’s going to be a killer. I’ll hold and wait, because the first step to a legit weed-based medical market is legit weed-based medical practitioners.

FULL DISCLOSURE: The author holds stock in the company, and Canabo is an Equity.Guru marketing client.