Cruz Cobalt (CUZ.V) up 36% over a week as commodity prices jump

EDITOR’S NOTE: A few months back, we started coverage on a company called Cruz Cobalt (CUZ.V), which we dubbed the ‘cobalt project supermarket.’ The group behind it has done many similar deals in the past, and is admittedly not known for actively working projects. But they do manage to flip projects successfully, they do manage to make money, and they have a thick list of very contented repeat investors from previous deals they’ve run.

We took some crap for writing about Cruz from some quarters because it’s never going to be a $1 stock and doesn’t seek to be. Hell, when it neared a buck, the company rolled the stock forward and brought it back down to $0.22 so as to keep it volatile.These are penny stock players to the core. The establishment mining guys see deals like Cruz and they sneer, but small investors play companies like this because they move hard and fast. Profits can come strong, but a downward swing can hurt.

Say what you will: Cruz was first to market in the cobalt rush, gathered a bunch of properties quickly while everyone else was still pushing the lithium barrow, and the stock has run several times as a result. Today, the company is touching highs, and it’s not because they’re likely to turn a drill or build a mill, it’s because they made a smart move, before everyone else, and continue to find new investors who like what they’re selling.

I wouldn’t put it in my RRSP. But I’ve definitely made money on it, so respect is owed. Enough respect that I decided to put our new energy metals beat writer, Bob Beaty, on the case.

Bob’s been beating the brush on resource deals and beyond for enough years to know what’s good, and the assignment here was simple: Tell me what you think, man.

Oh, and welcome to the fray, Bob.

The current lithium battery market watusi still kind of reeks of the acrid smell of spent gunpowder. Everyone is firing in all directions with little substance, although the smoke does appear to be clearing.

If you don’t understand what goes into a lithium battery, go to Battery University and check out the Lithium battery types, components, materials etc. It’s a good primer, and you’re better off investing in a thing you actually understand – which is something a lot of investors in the sector in 2016 can’t say.

Today is the ‘Why should I own Cobalt?’ chat. 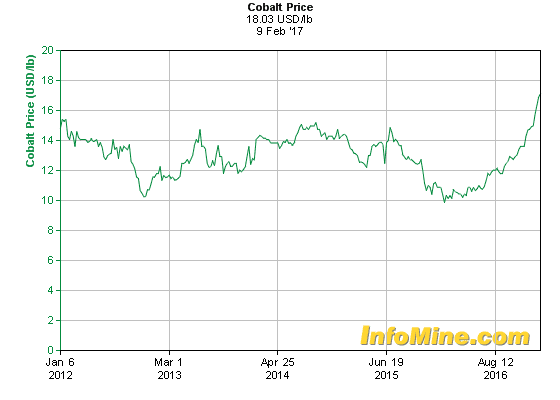 In future, I’ll deal with Manganese, Lithium, and even Lithium Nickel Manganese Cobalt Oxide batteries. The entire sector is still very much a work in progress for both industry and investors.

Tricky to invest in cobalt. Unless you are of an ETF bent (charts below) there are very few ways to expose yourself. Since the majority of cobalt (categorized correctly as ‘Blood Cobalt’ by colleague Chris Parry) is shipped out of the Democratic Republic of the Congo (DRC); dominance is still there. The market risk reward picture is like the other lithium-ion components in that the same adjectives and prognostications are used: Surging demand, shortages, prices rising etc. 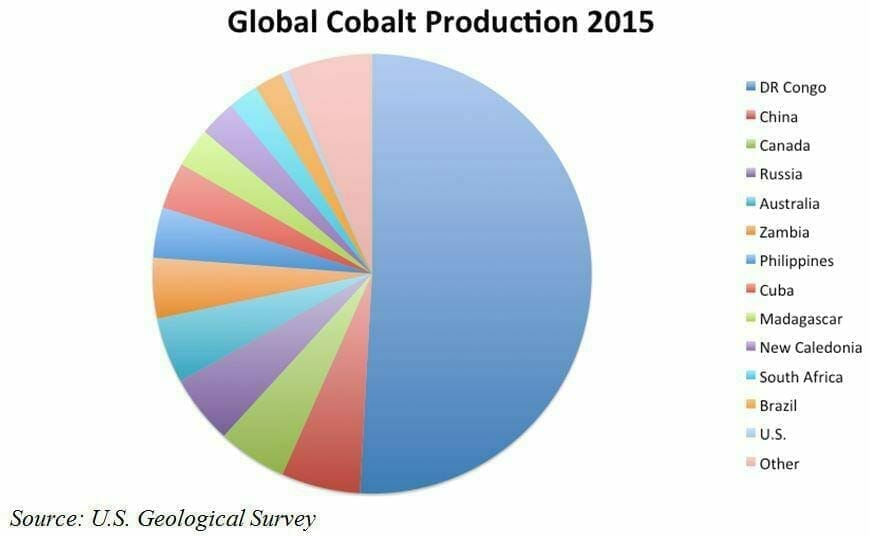 That said, Cobalt is used in 75% of Lithium Ion batteries, so you’ll ignore it at your peril. Unlike other some other components, cobalt is pretty much entirely a byproduct of copper and nickel and sometimes silver, so, predictably, the price has risen apace second only to Lithium, which tripled in 2016.

And while price is important, there is little doubt that there is a wide band of profitability. The true issue now is development and production; price will take care of itself.

Stats alert: A recent piece by Matt Bohlsen on SeekingAlpha has that info. I tend not to like to regurgitate good information when someone has done a very straightforward and credible job, so go look. I’ll wait.

There are exposure alternatives.

Cobalt futures? Good Luck. LMK.V knows how that goes. The $340 million market cap Cobalt International (CIE:NYSE) is out there, or you could roll with ETF’s if you’re feeling plucky, but as far as juniors?

Why Cruz? Land position, and it holds a nice Scientific Metals (STM:V) stock holding (more on that in a tick), and the fact that most juniors in the cobalt game have land positions and not much else.

Given that the stock trades at C$0.26, and hit a 52-week high of C$0.73 shortly before it rolled forward, and recently changed its name to the above, investors are more easily finding it under cobalt play searches now.

The pros side of the equation are simple; cheap price—monetarily, no real way of quantifying as to value. Further, it appears to have an excellent and sizable land package:

“Cruz is actively engaged in acquiring and developing Cobalt assets globally and has already acquired several high-grade cobalt projects (8 at writing) across North America. Seven cobalt projects are in Canada and one in Idaho. The goal of the company is to make Cruz the foremost cobalt project generator and developer on the TSX Venture Exchange. Management feels that cobalt is at the early stages of a significant bull market and we are pleased to be positioning CRUZ at the forefront of this cycle. This new property was acquired via staking.“

So, as it tends to be with most juniors in the Li battery space, production is some ways off, as is proving up resources, tonnage, economics etc. Little doubt that CRUZ has put together a decent land position which in some cases has a production provenance;

The Bucke Cobalt Prospect consists of approximately 1480 acres in the Larder Lake mining division of Ontario. According to Province of Ontario Mineral file MDl31M05NE00117, the property returned assays grading 13% COBALT and 240 g/t SILVER on this cobalt-focused prospect. Management expects to commence exploration on this property shortly, utilizing the flow through funds already on hand to fully assess this property.

Also comforting is CRUZ’s $1.5 million in cash (0.03 cents a share) and no discernible debt (MRQ) to help bolster execution and strategy.

Cruz is not on it, which both makes the spec case and ups the risk. Risk is good if you have the time, the fortitude, and cash earmarked for potential annihilation. Personally, I don’t own any. Yet.

The investment ‘twofer’ alongside the decent land position is the 2 million shares Cruz received from Scientific Metals in exchange for a Cruz cobalt asset in October 2016. STM shares are currently C$0.50 a share and moving hard, so no small change for a small cap deal.

Scientific’s properties are in Idaho, Utah, and Alberta; market cap C$19 million. Trading near 52-week high. As I mentioned, alongside Cruz proper, STM adds a nice kicker for those of a spec cobalt bent. To a greater or lesser degree, it should see some light in your portfolio, as if for no other reason, just to be there, cobalt-wise.

On the other hand, Cruz dragged its heels recently for a while as the constituents of the Lithium Battery Complex seemed to get more exposure daily, but a recent German push has paid off with a big upward move and much trading volume.

Like most spec stocks, its time will come. And go. And come again. So, reasonable to pick away as the sector delineates and firms. You get the idea.

FULL DISCLOSURE: Cruz Cobalt is an Equity.Guru marketing client, and the company has, at various points, owned the stock – and may again. 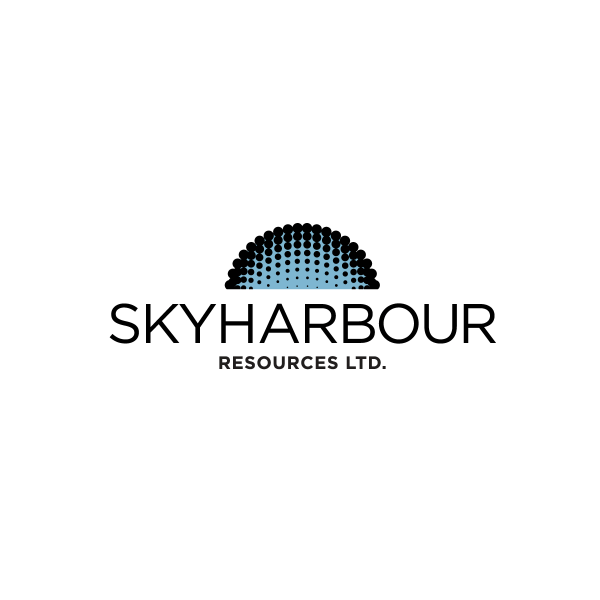 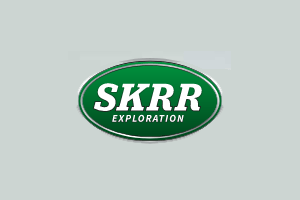 If you look out over the long expanse of mining exploration companies based out of Canada, I’d suggest the vast majority don’t know how to 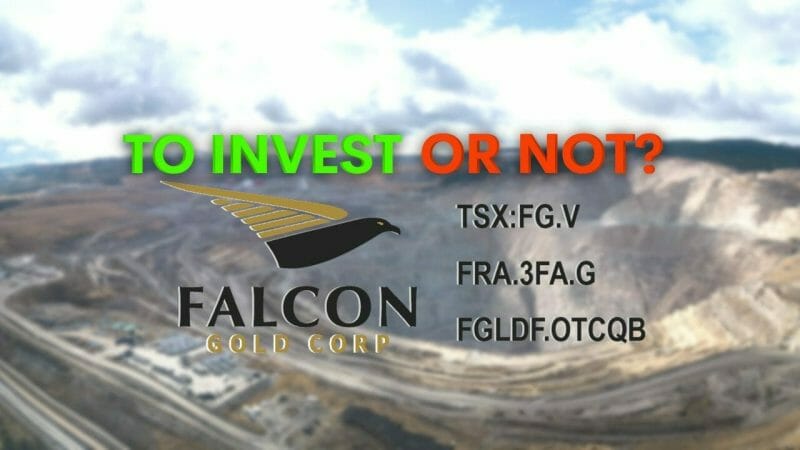 To Invest or Not: Falcon Gold Crop (FG.V)

In this episode, we look at Falcon Gold Crop (FG.V), a Canadian mineral exploration company engaging in the acquisition and exploration of mineral properties in 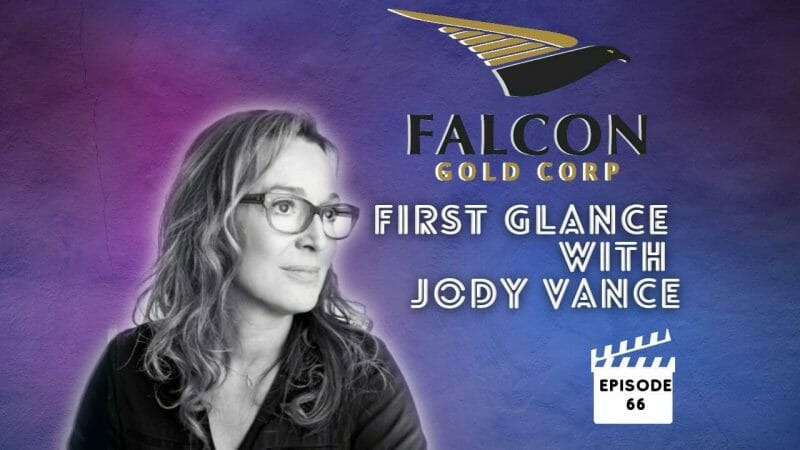 In episode 66, Jody chats with Falcon Gold (FG.V) CEO Karim Rayani. FG is an exploration stage company that engages in the acquisition and exploration 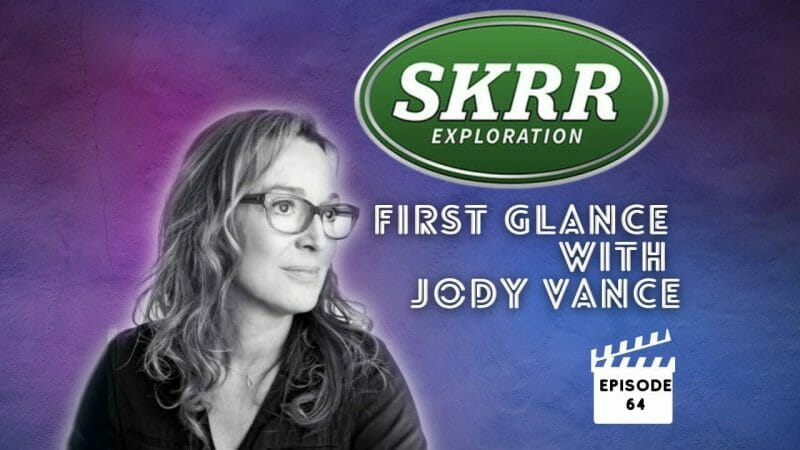